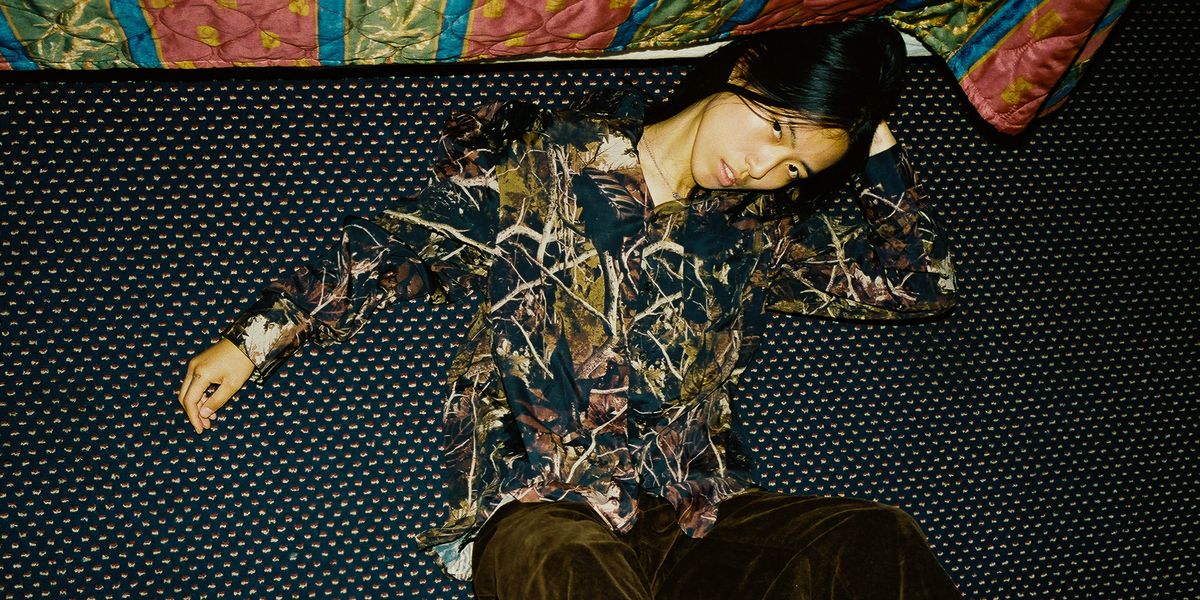 Deb Never has had bronchitis for a month.

"It's been crazy. I'm recording half of this EP with bronchitis, so it's gonna be the craziest sounding thing" — she pauses to laugh-cough — "It's not even sick sick, it's just left over phlegm. It's as gorgeous as it sounds. Beautiful."

She says this in a deeply casual tone of voice, the way somebody might comment on the recent weather instead of a clingy respiratory virus. She remains terminally relaxed as she recounts the various other things that her bronchitis has not interfered with: chilling with her girlfriend, skating, touring with Tommy Genesis. She laughs with earnest enthusiasm, even through the clot of mucus in her throat. It's a great laugh, the kind that makes you want to tell your best jokes.

Related | Tommy Genesis Is Not Interested In Being Your Freakshow

The daughter of a pastor, Deb spent her adolescence moving between Korea, Malaysia, and Washington (state, not DC — "everybody always thinks I mean DC"). It is not surprising that one of her chief influences is Seattle grunge icon Kurt Cobain, and somehow even less so that she cites '90s hip-hop as equal inspiration. This tension works for her; meaning, in practice, the tension hardly registers at all. Her synthesis of trap beats, ruminating lyrics, and tranquil voice is fluent and effective. I'm going through it, her music says — we all are, and it's chill. Bronchitis or not, we're all good.

Since moving to LA, Deb Never has joined the electronic/hip-hop focused WEDIDIT collective, the perfect complement to her sound's gritty vitality. Her graduation from basement production to something more refined only reinforces the raw integrity of her work's self-searching.

Below, Deb Never premieres her new "Ugly" video, and talks with PAPER about how toxic relationships inspired the single.

How did you become Deb Never?

My sister actually came up with it. She's been calling me that for a while. She was like, "Oh, Deb's never on time, Deb never shows up." I would be called that around friends and it kind of just became a thing, like it made sense. [My sister] actually made her own name Esther Never, too.

How long have you lived in LA?

Yeah, I love it. I've always only heard bad things and I have no idea why. As soon as I moved here, I was like, "This place is great, like, what are you talking about?" [Laughs] It's just a nice change of pace in weather, also. It's been pretty gray for the past couple months, though, but I mean, I like that too, so... [Laughs].

Is your family still in Washington?

My whole family lives all over the place. Most of them live in Washington, some in like, Ohio. I'm the only person out here.

Your music makes you want to dance and cry at the same time. Does that feel accurate?

It makes sense though, because no representation of a person is going to be encapsulated in one single description.

What do you think you'd be doing if you weren't making music?

Um, probably drugs. Cuz I'd be miserable. [Laughs] But I honestly don't have an answer to that. I don't know what I'd be doing cuz I also don't have a Plan B, so it's like this is the only thing I could imagine doing with my life, it's just hard to imagine doing anything else, to be honest.

It's like Travis Barker, the drummer of Blink-182, how he covered himself in tattoos so he wouldn't be able to fall back on a normal job, so he'd never have any other option but to pursue music.

That's so funny, because that's kind of what happened. I got a bunch of tattoos as soon as I turned 18 and just haven't gotten any since, but I'm just like covered in them. My mom, you know, she'd always be like, "Well you're not gonna get a job" — I'm like, any job that requires me to not have any tattoos, I don't want, anyway, you know what I mean?

You just finished up touring with Tommy Genesis. How was that?

It was really fun, it was my first time. It was interesting opening and playing all these songs that are brand new and all these people didn't know what these songs were, and I was testing them out for the first time and people were into it.

That must have been rewarding, but also pretty scary.

Yeah, it was crazy seeing a reaction real time. And it was scary, I was like, How are people going to like this? But there were a couple songs where I had people kind of singing the chorus if they could get it. But the next tour I definitely want people to know the words.

How did the idea of touring together come about?

I've known [Tommy Genesis] for probably like a year now. We met through my manager and she called one day and was like, "Yo, why don't you just open for me?" It was the perfect opportunity. Tommy's a great artist to be around. It was inspiring.

So tell me about your song, "Ugly."

"Ugly" was one of those songs where it was just written so quickly. I went into the studio and I was with Dylan Brady, and I asked him to play just a simple piano chord. And from there on, he was just playing, and it was just coming out of my mouth, all these words.

It's about quite literally an ugly relationship, one of those codependent relationships where it's toxic, where you know, you don't want me, and I don't want you, but I need you, type of thing. I think It's a common thing people slip into, especially getting comfortable in a relationship and you don't realize that it's bad for you. That's where my head was at the time, so words just jumped out of my mouth in that moment. We ended up finishing that song in like three hours, less than. Production and everything. It's a magical song for me.

What was it like making the music video for a song that means so much to you?

For this one, for some reason I didn't imagine anything sad for it, even though lyrically, it's sad, right? But because of the beat, I kind of was imagining a video that was in that same world, where it's sad but it's not that serious. I was really inspired by a lot of early pop-punk videos, like Blink-182, where they're really having fun with it. I didn't want this video to be so serious and brooding and, Oh, take me really seriously, where I'm like this sad, tortured person. The first thing that came to mind was five of us in dog outfits. it's ironic, it's enjoying the shit.

Do you have a least favorite part about making music?

Finishing it. Creating it is really fun, you get to riff on a beat and kind of get a melody going, and then you lay everything down and all the sudden it comes to technicality, which is like okay, structuring it, or changing the words. It's so necessary, but it takes the magic out of it, almost. I'm just the type of person that likes to jam out and make something right then and there. But it comes with the territory of making songs.

Do you feel like there's a difference between the kind of music you make now — "Ugly," and the rest of the EP — and the music you made when you were first starting?

Absolutely. I personally feel like [the music I make now is] better and just more realized than before. Before, I was just writing in my bedroom, just had a guitar, and I remember at the time I know what I wanted to sound like, but I was really limited with just me and my guitar. I used to make a lot more folk type of music also, just being from the Pacific North West. Now, being able to liven up the music a little bit more, I can finally do what I truly envisioned.

Is there a favorite song of yours on your new EP?

I don't have a favorite just because I actually like all of them. Normally I hate anything that I make, just naturally as an artist. But these, I like all of them. They're all my children! I don't have a favorite child, man. This EP is just a collection of songs, everything is pretty different, just showcasing the different types of sounds that I like making. It's an introduction, right? Even through this process I'm trying to figure out who Deb Never is, as well.

Do you feel like Deb Never the musician is separate from the Deb I'm talking to now?

I don't think so. I think it's pretty accurate because outwardly, I like to have a good time and I'm joking around all the time, I'm pranking, but the music is kind of an honest portrayal of who I am. It's serious, but it isn't. And I'm finding who I am through making these songs, too. Listening to the EP, hopefully it'll make you feel like you're growing with me. I want people to be on that journey with me.

Do you have plans for after the EP? Have you been healing?

I mostly want to release singles for a while after and then hopefully an album. I'm just sitting on a lot of songs and still making more, so, I don't know yet, if I'm being honest. Anything can happen. The day after I got back from tour, I started going to the studio every day. The sickness hasn't really held me back, but [Laughs]... I'm still coughing.