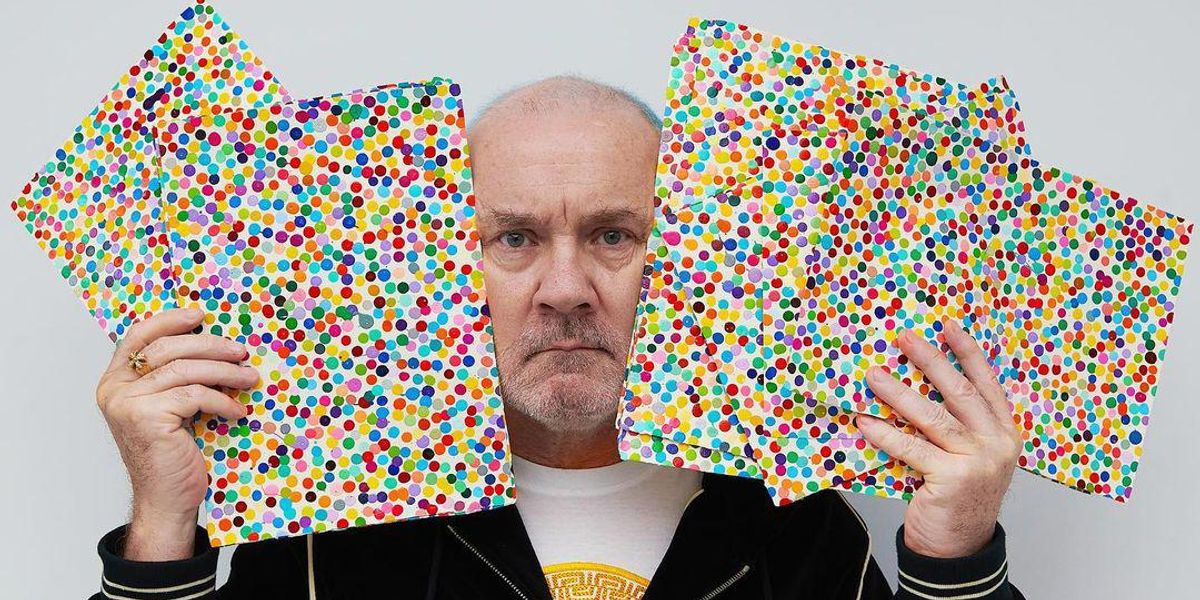 The term "NFT" has become ubiquitous these days — made famous by the likes of Emrata and Tiger King — eliciting an urgent fervor among those who collect them (or those who gawk at them from afar).

NFTs, meaning "non-fungible tokens," are intended to be talked about. The appeal lies in the conversation surrounding them, as the owner of the NFT is the sole possessor of the item, cementing their role in an odd part of history.

Damien Hirst, an English artist who rose to prominence during the age of the Young British Artists (YBAs), has recently entered the conversation. Titled The Currency, Hirst's project isn't the NFT as we're used to — it's 10,000 of them. Each one corresponds to an A4 sheet covered in colorful dots, which have all been signed, dated and titled.

And they're selling for $2,000 each, nonetheless — only adding to the fervor — purchasable with Ether, Bitcoin, USD Coin, Dai, credit and debit cards.

Users were quick to comment, "Is it just me being old or are these NFT's the greatest con ever" and "If I actually get the piece in the mail, sign me up. But $2000 for a fucking jpeg isn't the one."

Their concerns illustrate tensions surrounding NFTs, which are also questions Hirst himself is attempting to grapple with. The conflation of digital ownership with physical ownership — something which has become all the more relevant in recent years — becomes the focal point of The Currency.

"It's often said that money corrupts art," Joe Hage, Damien's advisor, told Bloomberg. "But this is an attempt of art corrupting money."

After two months, owners of the NFTs have to decide between the NFT or the physical artwork — keeping both isn't an option. It's as if we're forced to consider, when extracted from cultural context, what value does "value" have?

Hirst provides no clear answers (surely there aren't any). Instead, he prompts us to delve a bit deeper into the technological cacophony we're living i and to see if we can stay afloat.

Become a part of The Currency, here — if you dare, that is.