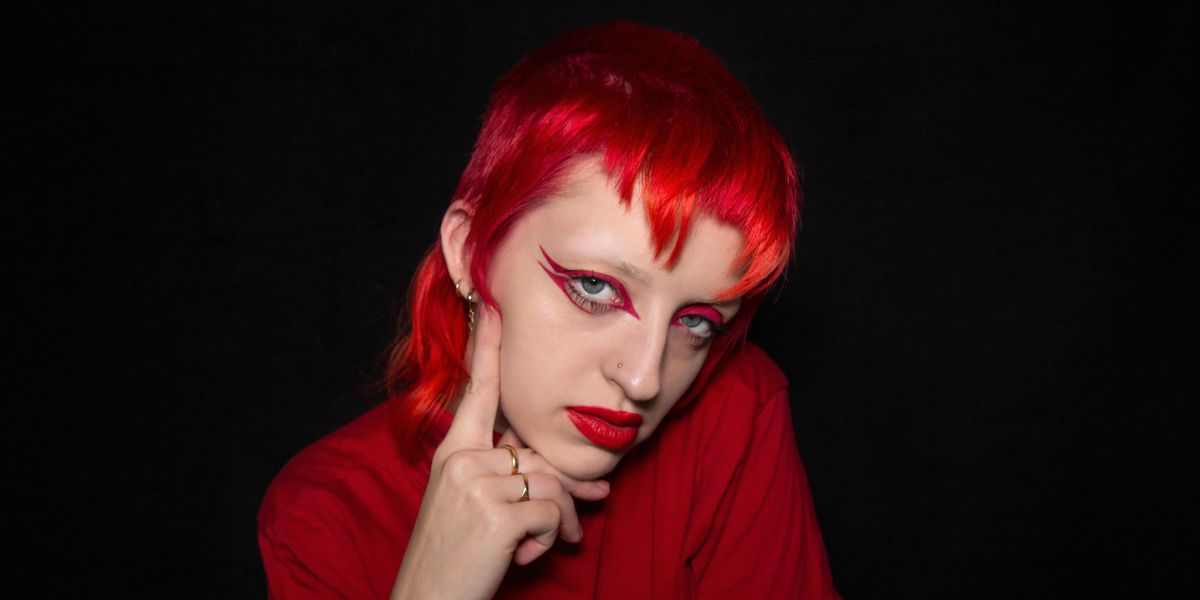 Musician Cody Frost says she's reached her "final form" in the new music video for "HIGH/BYE" — a Naomi Kane-directed visual that sees the queer British breakout present as a cherry red clown to underscore feelings of being left out from friends who've grown apart from you. "I guess, for me anyway, I realized I've always been the clown," Frost tells PAPER of the release. "That's okay though cause I look cute."

The track's lyrics explore Frost's generational unrest, and dive head first into her growing pains and fleeting friendships. "Growing up is like growing into a plastic mould you don't fit in/ But at the same time you're being torn limb from limb," Frost sings on the pop-rock cut, before interrogating a former BFF on its chorus: "Did you lie about being bi? Do you still get high?"

Today's release, which follows February's "verbal warnings," puts Frost inside an actual bar in Burnley she once worked at. Frost plays both the waiter and the entertainment, taking the venue's stage and performing in front of a fake audience with balloons for heads that she eventually pops in cathartic release. Brutally honest, self-aware and a bit comical, it's proof that Frost could easily become a voice for her generation.

Below, PAPER caught up with Cody Frost to talk about all things "HIGH/BYE" and her side effort as a tattoo artist.

You've started officially releasing music as Cody Frost in 2021. How has the process been developing and honing your sound to a place where you're finally confident sharing it with the world?

It's been tough. I've been through a lot of ups and downs, but I've been growing and learning how to be happier in myself. I wanted to make sure I put as much love as I could into these songs before I put them out. Obviously COVID had a part to play in the process taking longer, but I got to be around my girlfriend a lot more so I'm also grateful for that. I will say it's definitely a release for me now that people are starting to hear what I've been working on. It's taken the pressure off a little, but it's been really exciting.

Listening to "Verbal Warning" and now "HIGH/BYE," how would you describe this sound as something that's uniquely yours?

I can't say I know any-one else I sound like. I genuinely feel as though these songs don't really fit anywhere. I guess that's not new to me really, anyway. I just wanted to speak my mind and I find it hard to be anything other than myself. I used to get put in the box of "punk" a lot and, although I used to like a little hard-core punk, I never really felt like that's who I was either. So I guess the easiest thing was to just write what felt natural to me and that is nothing but the truth.

Is it important for you to create music that's relatable to your audience? How do you go about achieving that?

I just write what I like and kinda hope that someone out there can relate. I don't write songs with intentions of appealing to the masses — just maybe a few people that feel the same way as me. I know that not everyone will relate and that's okay, it's for the few that will.

"I just wanted to speak my mind and I find it hard to be anything other than myself."

What's a typical production process like for you in creating your songs?

Over the period of time that I've been writing, it's kinda changed really. I started out writing short poems — something my best friend inspired me to do. Then, I meet up with Dan [Weller], co-writer and producer, and play some bits on piano while he starts to make a beat/ loop. Usually I'll sing something that catches our attention and develop it from there, but it's more a case of putting the pieces together from the poems I've written. As I've gotten more confident with writing, I've started making rough songs on GarageBand and feeding them back to Dan to see if they spark anything. We tend to use most of the things I work on. I play bits of instruments on my tracks too and it's nice to see Dan's new perspective on them.

You started off by covering other artists' songs. What did you learn from that experience in terms of writing and performing your own material?

I learned to seek heartbreak in the nicest of songs. I like it when artists write what sounds like a happy song, but underneath there is always something else going on. It sets a scene; I guess not all songs are sad/ angry, but it's cool how you can change the whole perspective of the song by throwing in a few minor chords.

How is it working with Naomi Kane on these videos? What does that collaborative process look like?

She's magic. I'm really lucky to have such an amazing team to work with. Naomi really understands what I want aesthetically, and aesthetics are really important to me as not only a musician but also a visual artist. I'm always drawn in by the colous, the mood, the little worlds that artists create. Naomi has really helped me bring my daydream to life and it's so much fun.

Lyrically, what is the story behind "HIGH/BYE"?

Finding it hard to "grow up." I see my old friends from school sometimes and I feel like I don't know them. I've been doing a lot of stuff and it's sad that I wouldn't really know how to begin at re-kindling a friendship with them. But also realizing that they aren't really what you need anymore and I'm not sure they ever where. I miss the good times, but also wanted to mark this weird period of time in my life where you're not sure if you're doing everything right and you have to pay bills and you're kind of on your own.

How do you think the music video amplifies the message of that single?

I wanted to show that sometimes when people leave you out, you kinda feel like a clown. But I guess, for me anyway, I realized I've always been the clown. That's okay though cause I look cute.

"I like it when artists write what sounds like a happy song, but underneath there is always something else going on."

In addition to being a musician, you're also a tattoo artist. How did you learn that?

I'm still learning; I feel like you never really stop, though. Even when I fully finish my apprenticeship I will still continue to learn. I knew I wanted to work in a shop — cause you, know, needles and hygiene and that — and it took me a while to find a place that would be patient enough to deal with me [laughs], but I like the place I am now and I love my customers a lot.

Do you have a favorite tattoo and what is its significance?

I have a few favorites. I love my My Chemical Romance ray-gun on my arm. They where pretty fundamental to building my music taste. I love all their eras, but Danger Days will always have a special place in my heart — feels super nostalgic and takes me back to being 14. Plus, the line work is really clean on it [laughs]. I also love my plaster on my knee. It's a little heads up to self-care and learning to take care of myself. But I do genuinely love all my tattoos. Some aren't perfect but they're like a scrapbook of the things I've been through so far.

That's tough cause I usually just get whatever I want, whenever I want [laughs]. There are a few artists, lockdown permitted, that I would love to travel for. Kinda want something under my chin, but not sure yet. Maybe I'll get the "verbal warnings" release date cause that was my first release?

Stream "HIGH/BYE" and "verbal warnings" by Cody Frost, below.