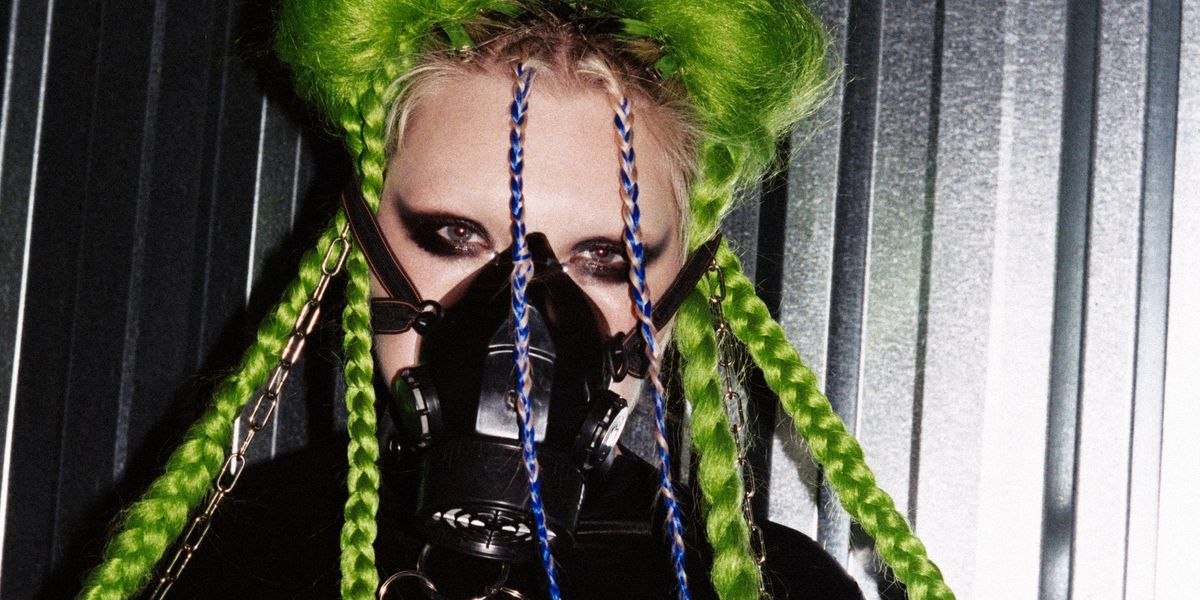 Sweden's best kept secret is wrapped in latex, struts in mile-high platform boots, has a ball gag hanging out of her mouth and goes by the name of COBRAH.

COBRAH's latest single, "DEBUT," is no exception. Featuring some freaky 3D mouth-orb artwork, the track itself is a dark electro cruiser full of grinding metal, throbbing bass with cheery house stabs sprinkled throughout. On top of all that, COBRAH's robotic, staccato vocals give it an almost sinister undercurrent. Inspired by COBRAH's own experiences with straight girls she's dated in the past, "DEBUT" at large is about pushing someone out of their comfort zone and showing them the ropes — even if that means they have to be tied, bound and gagged to do it.

Ahead of the PAPER premiere of "DEBUT," we caught up with COBRAH chat about the last time she stepped out of her own comfort zone, plans for her label GAGBALL and putting an end to the age-old debate over the best "Wurthering Heights."

What's the backstory behind your new song?

The day after I guest danced with Charli XCX in Stockholm, I went to the studio and had lost my voice from screaming at the concert. Me and Hannes [Roovers] wrote the bassline and put Snoop Dogg's "Drop It Like It's Hot" vocal over it because I couldn't record anything. Eventually I wrote the first lyrics inspired by an old romance I used to have and recorded it really soft because of the loss of voice. We decided to stay with that soft energy to the hard bass and it fitted very nicely.

Do you remember the last time you stepped out of your comfort zone?

We took these photos at a demolition site in the middle of the night. Highly illegal, probably. I was wearing this crazy performance outfit and a pair of 8-inch platforms. To get to the top of one of the excavators, my stylist and photographer had to lift me like a cheerleader to get up there. It was in the middle of a residential area and all of the sudden a lady screams, "GET OFF THE EXCAVATORS OR I'M CALLING THE COPS!" multiple times, and I had to calm her down screaming back, "WE'RE JUST TAKING PICTURES!" and then another guy screamed, "ARE THEY ANY GOOD?" and all of the sudden we had a big audience of people from the neighborhood looking at us. Normally I'm quite a "good girl" when it comes to law breaking, but anything for the arts. Always.

If you could perform "DEBUT" anywhere, real or imaginary, where would it be?

Definitely a space shuttle going off into space. Like when the bass hits, you just shoot into the sky... that would be so dope.

I love the dark electro feel of the track. What are some of your musical influences?

I'm in love with the album HOWSLA, which is a mix of many artists and producers at the OWSLA label, and artists like Arca, Flume, etc. But when it comes to artistry there has to be something more to it than just great music. Great artists are people with a purpose and a message, like Peaches, Nina Hagen and Amanda Palmer to name a few of my favorites.

What were the reasons behind founding your own label GAGBALL?

In the beginning, no label wanted to work with me on my vision. In Sweden they didn't really get what I was doing (I still think they don't really get it). and so it was way easier to do it by myself with no artistic compromise. It has been really great having all the control, but doing something for the first time also means doing a lot of mistakes. It's just way more worth figuring out who you are as an artist independently than having a label forcing an image on you.

What is your vision for GAGBALL going forward?

Right now it's me doing everything, from releasing the music, sewing the stage wear, booking the shows, making the cover art and videos (working together with the animator Erik Hellmouth) under GAGBALL. I'm looking to work with some more people around the administrative stuff, so GAGBALL can be just a creative hub for me and eventually far ahead in the future for other artists too.

Definitely Kate Bush, I listened to her songs as a kid and she was one of my first Idols. When I listen to the music that I write today, I think there's a strong hint of Kate Bush's melodic language. Also the reference of longing for affection that's described in Wuthering Heights.