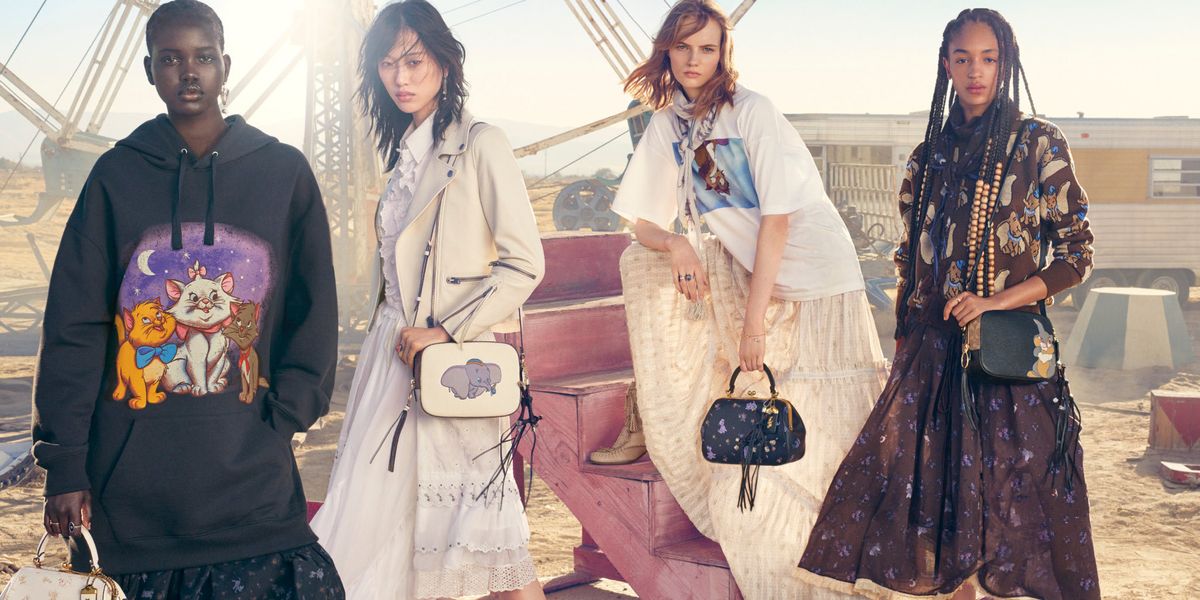 Coach is kicking off the new year in dusty desert, golden hour-style. Today, the brand has launched their Spring ready-to-wear women's campaign. Shot by Craig McDean on the ruins of an abandoned carnival on the outskirts of Los Angeles, an all-star gang including model of the year Adut Akech, Sora Choi, Fran Summers, Kiki Willems and Indira Scott as well as Coach ambassadors Kiko Mizuhara and Guan Xiaotong stun in conestoga wagon-wear meets Americana kitsch.

The collection was "inspired by road trips out west" — seemingly both those along the Oregon trail in mid 1800's, and a family road trip to Disneyland in the 21st century. Styled by Jane How, we see the cast in waterfalls of ruffles, long prairie skirts, distressed leather, subtle floral prints, embroidery, patchwork denim, moccasin booties and fringed leather heels.

"The images and new cast convey the distinctly inclusive and optimistic vision of the house and the collection's theme of scavenged and reconstructed Americana" Coach explains in a press release.

In the semi-apocalyptic desert sprawl, the pastoral pieces are charmingly bucked by the playful kitsch accents. In keeping with nostalgic Americana, the campaign includes a series in collaboration with Disney: in several shots Akech rocks an oversized Aristocats emblazoned hoodie, Scott a cowl neck Dumbo print sweater, and the whole cast are adorned with Disney animal purses. Coach's Signature Patchwork Dreamer bag, delicate splayed fan earrings, and a stunning oversized braided sweater are among the stand-out pieces.

"Spring 2019 is inspired by the American west," said Coach Creative Director Stuart Vevers. "It's about possibility, adventure and romance—and places where anything can happen."

Coach has shared an exclusive video of the campaign with PAPER. Eerie, delicate music plays as the cast interacts with their surroundings, emphasizing the contrast of the the childish ruffles and pretty textures with the desolate landscape.

Watch above, and check out a slideshow of the campaign, below.