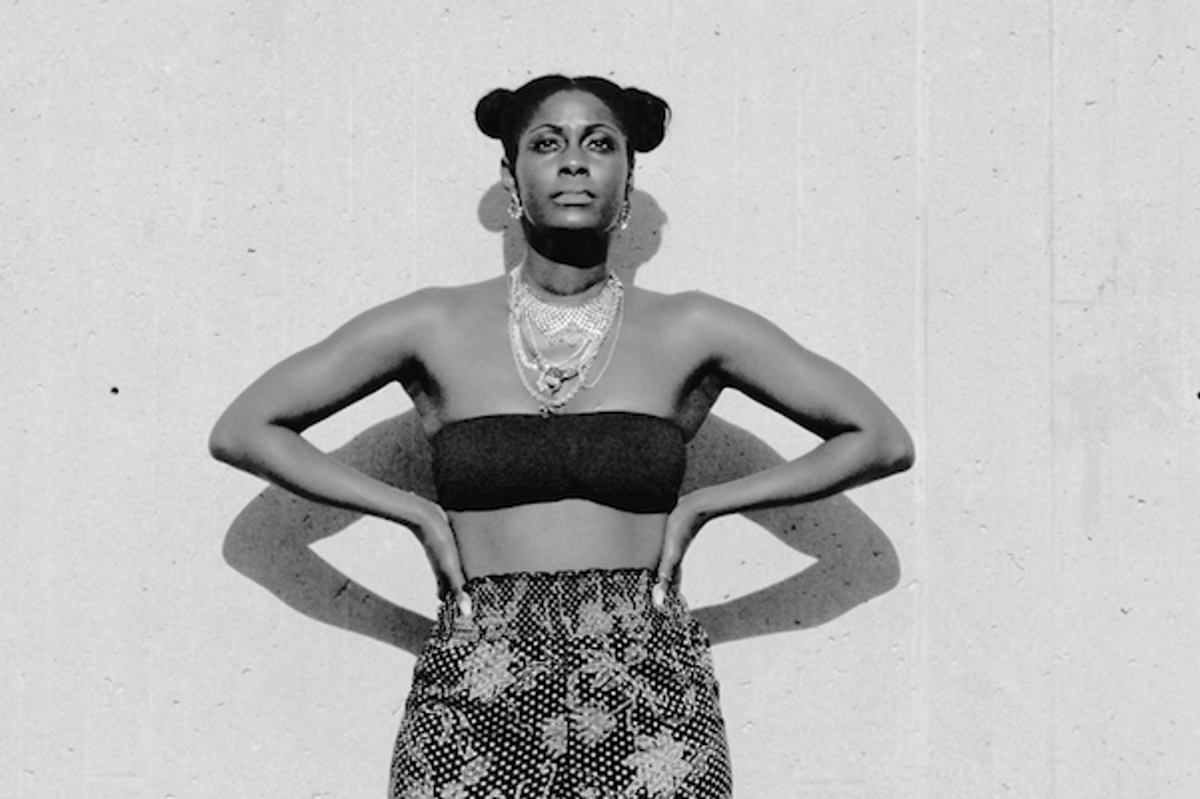 Rapper Sammus on Challenging Gender Norms, and the Complicated Notion of Strong Women

Enongo Lumumba-Kasongo, the Ithaca-based rap artist, producer, and PhD student who performs as Sammus, fills the room with shining pieces of herself the moment she begins to perform. Her music simultaneously acknowledges and navigates the vastness of emotion.

Sammus distills lived experience that resonate strongly. The fear of not being sure your parents are proud of you positioned next to the pain of sharing a Netflix account with an ex brings us to the turning point of "1080p." Her love of Joy Division builds upon her interest in conversations about the 4th dimension in "Mighty Morphing." We sat down with her to talk about her album Pieces in Space, activism, and the shortcomings of the idea of "genius."

How did you choose Sammus as your music identity?
The name Sammus was given to me by a friend, but it was something I had been thinking about. The easy answer is "I love video games!" and Samus is one of the first playable women characters. I remember playing the videogame Metroid and the main character is in an armor suit so you can't tell what the character looks like. When you beat the game, the armor suit comes off and you discover that it's a woman and she's in a bikini. As a kid, that really threw me for a loop.

It wasn't until later when I started making beats and showing people that I was a producer that I started to deal with weird gender stuff where folks were like, "Oh, who helped you to make your beat?" That wasn't being asked to my male counterparts. It was then that I started to have a relationship to the character of Samus in the sense that there was a moment of shock when people realized "Oh, she's the one who's behind the production."

You're currently on tour and you're donating a portion of profits to Ithaca Underground and Black Lives Matter Ithaca. How does your activism intersect with your music?

I'll start with Ithaca Underground because that's chronologically where I got started working within my community. They're a nonprofit that puts on all-ages radical shows in Ithaca with a focus on bringing in artists who might not have a platform otherwise- A lot of woman-fronted bands, artists who identify as queer, trans artists, artists of color. They also bring in genres that aren't traditionally represented, so a lot of punk, hip-hop and noise. The all-ages component is also critical. It creates spaces where a 15-year-old can come and play their demo and someone who has been in the game for 20 years can play, and they are all accepted. Ithaca Underground really helped me set up shows and put me on the bill with artists that I don't think I would have thought to book myself with- a lot of punk artists. Very rarely have I been on an all hip-hop set with Ithaca Underground. That really informed my ethos around how I set up shows now. On my tour, every stop is multi-genre.

Last summer, I went to a conference called The Movement for Black Lives Convening in Cleveland with a group of individuals. We came back to Ithaca and developed a Black Lives Matter Ithaca chapter. Since that time, we've put together programs including healing circles and spaces for black folks and folks of color to talk about what's going on in their lives and the unique ways that they experience racism in Ithaca. Moving forward, the goal is political education and providing means for folks to connect some of the big theoretical concepts with what's happening on the ground. Both of those groups are really important to me in terms of my thinking and art.

You have a song about genius, and we've talked about the social implications of the word before. How you think the word is used or misused?
I've thought a lot about genius, mostly in relation to Kanye West. He is someone whose unifying message has been, "I'm a genius and I deserve to be seen among the greats. I'm right there with Beethoven." Seeing him fight for his space in a variety of different platforms has allowed me to see myself in those spaces.

There are two competing notions that I grapple with. One of them is, "I can speak as a genius in the same ways that you can." But then there's also a rejection of that even being a reflection of what genius means. Those two things are always in contention. In the same way, we all watch The Oscars and we want our brown artists to win, and then we're like, "The Oscars don't mean anything!" That's what the song is grappling with.

Girl-power feminism often mandates that we be strong in order to be good feminists, but I don't find that encompasses most peoples' experiences as women or as humans. How do you think about strength and vulnerability? Maybe the definition of what is or isn't "strong" needs to change?
I think about this a lot because I'm really fascinated by this movement of feminist memes- folks who play with ideas of strength and vulnerability when they're talking about what depression looks like for them. Those are really powerful. They have created the space for folks to really engage with sadness or fear or being in the kinds of relationships [where people tell you], "You're not being a strong woman by being with this person." But as you said, humans end up in relationships with folks that aren't always for the best.

These memes fight against using empowerment terms to shame people around their decisions. I hope my work does similar things, especially around blackness and black womanhood and ideas of strength there, because the idea of a depressed black woman is unthinkable in some circles. I've had so many women of color, black women come up to me and say, "Thank you for writing 1080p because I never thought it was ok to say, 'I don't know what's going on.' I never thought that it was ok for me to exist in that space because I have to represent all black people. I have to represent all women. I can't have any of those identities appear to be weak."

There's an extra emphasis on keeping it together because the reality is that we will be judged if we're seen as weak. That balance is really hard for me; I don't want to make it an imperative that you show your vulnerability because there are reasons to protect yourself sometimes. Not everyone's vulnerability will be treated with care. It's a beautiful thing when you're able to emote, but sometimes that's not safe for some folks.

Ultimately what I hope I'm doing is creating more space for women of color to say, "Today was awful. I didn't get anything done. I didn't eat. I didn't shower. That was my day. That's fine." Empowerment is about complexity. It's about showing a variety of different ways of being.

Sammus will perform today and tomorrow at SXSW. Check out her tour dates below: