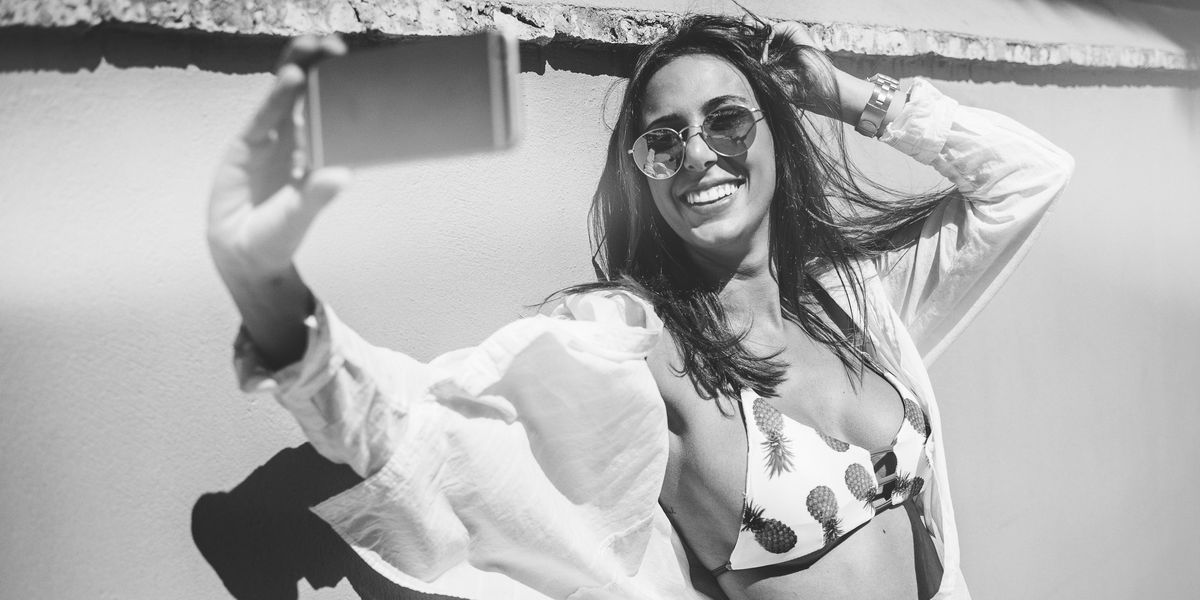 If you joined the app anytime from 2012 to present day, you're probably already aware that Instagram trends are exhausting. As much as celebrities might want the act of posting black squares, short clips of singing John Lennon lyrics, and now black and white selfies to be woke, most of the time, these posting trends appear as merely performative. How often, we should ask ourselves, does 'challenging' our friends to post something really make a difference for those that the act is supposed to help? (We're looking at you, ALS Ice Bucket Challenge from years past).

The latest trend to dominate our Instagram feeds this week is called #ChallengeAccepted, in which women are sharing black and white selfies in the name of female empowerment. Many then nominate others to do the same, with Jennifer Lopez, Reese Witherspoon, Khloe Kardashian, Eva Longoria, Natalie Portman, Rashida Jones and more hopping on the bandwagon in the past few days.

Each has explained in their captions something along the lines of how important it is for women to support fellow women, mainly including the hashtag #womensupportingwomen (which has now been tagged in over 8 million photos) but not divulging any further on the trend's true purpose. The hashtag #ChallengeAccepted itself currently boasts over 5 million posts, meaning it isn't only being shared by celebrities.

As written by Taylor Lorenz for The New York Times, there are several possibilities as to where #ChallengeAccepted originated. Back in 2016, black and white photos with the hashtag first emerged, aiming to share messages of "cancer awareness," and "spreading positivity" in the years since.

Speaking to the Times, an Instagram representative indicated that the first post "for this current cycle of the challenge" was shared close to two weeks ago on the page of the Brazilian journalist, Ana Paula Padrão.

The Times also spoke to a public relations and "influencer marketing manager" at Later, a social media firm, who believed this round of selfies might have been inspired by Alexandria Ocasio-Cortez's speech on the House of Representatives floor last week, after Ted Yoho referred to her as a "fucking bitch." Feminist and female empowerment posts circulated on multiple social media platforms after Ocasio-Cortez spoke out.

Another popular theory is that the challenge derived from Turkey, where women have been said to be posting black and white selfies to protest gender-based violence there.

Writer and artist Mina Tunay shared a graphic detailing "what's going on in Turkey" at the moment, connecting the hashtag to high femicide rates in the country, the recent killing of university student Pinar Gültekin by her boyfriend, and information regarding "honor killings," police brutality and other forms of violence facing Turkish women within four slides. In its caption, Tunay writes, "Of course this is not the entire story but a general background."

Munroe Bergdorf posted similar graphics to Instagram, one from creator @beelzeboobz and another originally posted by American University's Turkish Culture Club, using the information presented on their slides as the reason why she won't be posting a black and white selfie:

According to Lorenz, however, Instagram confirmed that the resurgence of #ChallengeAccepted in Turkey is "unrelated to the version of the challenge that spread in the US."

Ultimately, if your goal this week is to "support women," many Twitter users have come up with more logical ways than a flattering, filtered selfie, such as reading books and articles penned by women or giving shoutouts to other female-made creations we've utilized recently, as one user writes:

Other Twitter threads suspect that a man may have started the challenge just to see a slew of attractive selfies (which actually sounds probable), but there is truly no way to be sure.

a man clearly created this instagram challenge where women post hot black and white pictures of themselves for feminism
— Rachel Wolfson (@Rachel Wolfson)1595873633.0

Before you edit and post a black and white selfie of your own, keep in mind that it may not "help" or "support" women in this current environment as much as donations/ financial support to feminist organizations, or voting for women running for political positions this fall would.