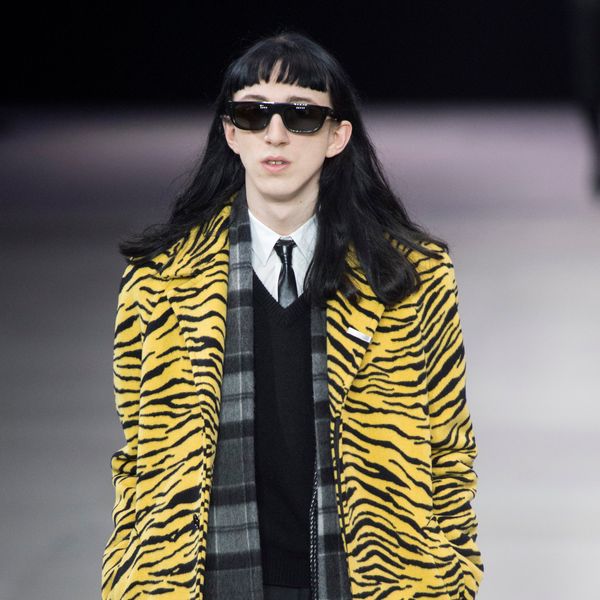 Say what you will about Hedi Slimane and his sans accent mark revision of Celine, but he brings his cultural imagination with him wherever he goes.

One of his hallmarks as a designer and creative director — first for Dior Homme, and then for Saint Laurent, which he rebranded from the house's original YSL name — is his irreverent, rebellious streak. For those not fully attuned to the occasionally complicated language of fashion, Slimane imbued those brands with a rockstar sense of freedom, making fashion more accessible for anyone else who might dare color outside the lines, or even wish to.

Since launching his first spring 2019 collection as Celine's newly tapped creative director, Slimane announced he would also launch the luxury brand's inaugural menswear line. He presented an androgynous, co-ed show then, and now, for fall 2019 in Paris Fashion Week: Men's, he presents a vision of "man" that feels rooted in the tradition of men's clothes, but still aims to break certain rules.

​Oversized, double-breasted blazers are paired with boldly-printed coats and shades; skinny ties, prim collars, and neutral sweaters match with stylish overcoats and a variety of '80s-leaning bombers. Pleated trousers in different fabrics expose white socks (!!!), which go with black tasseled loafers, buckled boots, and the occasional creeper. It is worth noting that there isn't a chunky sneaker in sight, which in itself feels like fashion-trend rebellion via traditional men's dressing.

Something about this collection's incisively laissez-faire styling also feels as gender-fluid as his work has ever felt. It's just as easy to imagine this show with co-ed models, like his first collection for women. It also, like Slimane's past designs, feels indebted to a sense of music, honoring both the buttoned-up presentation of 1960s rock-and-roll stars and the artfully disheveled businessman of 1980s New Wave bands ranging from Joy Division to Depeche Mode. (For instance, notice how the models cast sport edgy, prismatic hairstyles with their business-bitch wardrobe).

It's as if Slimane's Celine menswear says to a cisgender man, questioning man, or man in transition in this modern world that, yes, you can play with fashion styles both classic and loose, and you can be successful either way. I suppose this all depends on how one defines success.

See a selection of looks from Celine's fall 2019 menswear show, below.