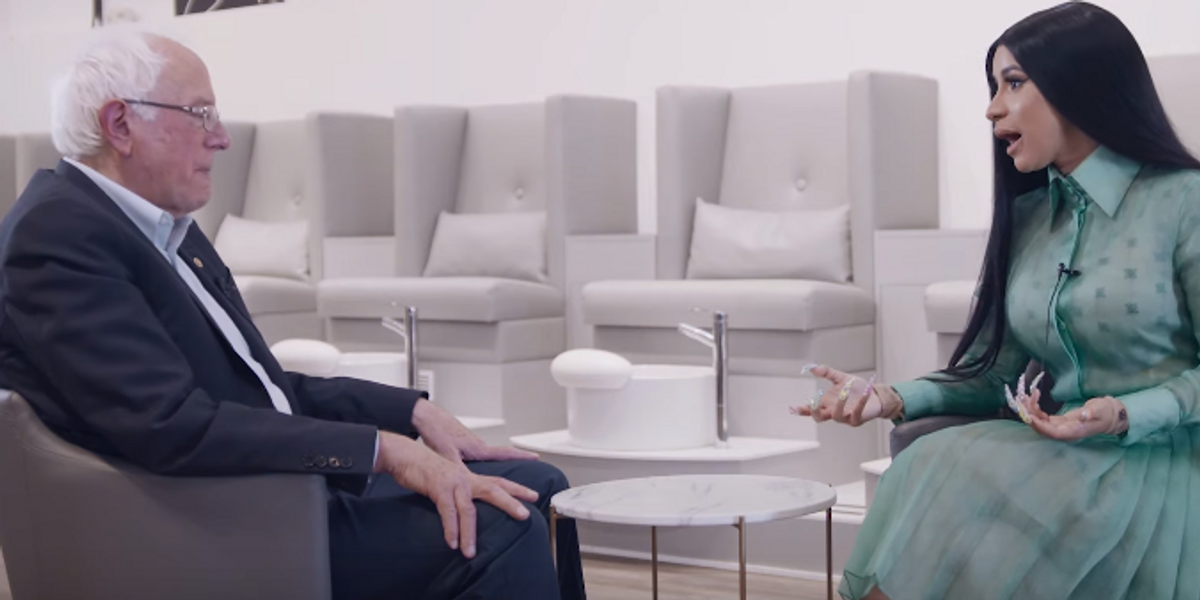 Watch Cardi B Take Bernie Sanders to a Nail Salon

Cardi B and Bernie Sanders have forged an unlikely friendship over the past couple months, after first interacting on Twitter. Today, they posted a campaign video filmed in Detroit salon Ten Nails, with Cardi asking the popular Democratic candidate policy questions submitted by her many followers.

The video acts as a primer for young voters unfamiliar with Sanders's main platforms: universal healthcare, canceling all student debt, free public college education, addressing issues around race and police brutality, taxing Wall Street, expanding DACA, improving worker conditions, and increasing the minimum wage. (You know: literally everything that would fix America.) "We have this bully as a president and the only way to take him out is somebody winning," Cardi B begins. "I want to tell my millions of followers: We're here to educate you guys."

Cardi B frequently and effectively brings her personal experiences into the discussion, speaking as a member of the Latinx community and as someone who has struggled to make rent while earning minimum wage in the past. "As a New Yorker — not now but when I was not famous — I felt like no matter how many jobs I get I wasn't able to make ends meet," she says.

The two go on to talk about, among other things, a shared love of Franklin Delano Roosevelt — he's Cardi's favorite President, although Sanders hopes to change that come 2020.

The video ends on Sanders making a plea for youth voter registration: "Cardi, can I just say one thing before we get off? A lot of people moan and groan, right? They don't like Donald Trump, they don't like the low wages, they don't like spending 50 percent of their income on housing, they don't like student debt, they don't like the fact they can't go to college. But all of that moaning and groaning and complaining doesn't mean anything unless we change the system, okay? Young people have got to get involved in the political process." Earlier in the video, he also refers to Trump as "an overt racist."

It says a lot that the Sanders campaign saw an opportunity in Cardi B, who obviously has millions of young fans to mobilize but is also an unpredictable figure known for speaking her mind on social media. Though she has been publicly feeling the Bern since 2016, you get the feeling that if Sanders said or did something she disagreed with, Cardi would happily call him out. He's presumably comfortable with that.

Politics aside, let's consider the fact Sanders and Cardi went to a nail salon in the first place. It's extremely funny! They should have taken it further and gotten him a manicure, but whatever! We can't have everything. As the Democratic candidate acknowledged, "Cardi's nails are just a little bit different from mine," but "our views on the issues are pretty similar."

Watch the entire video, below.