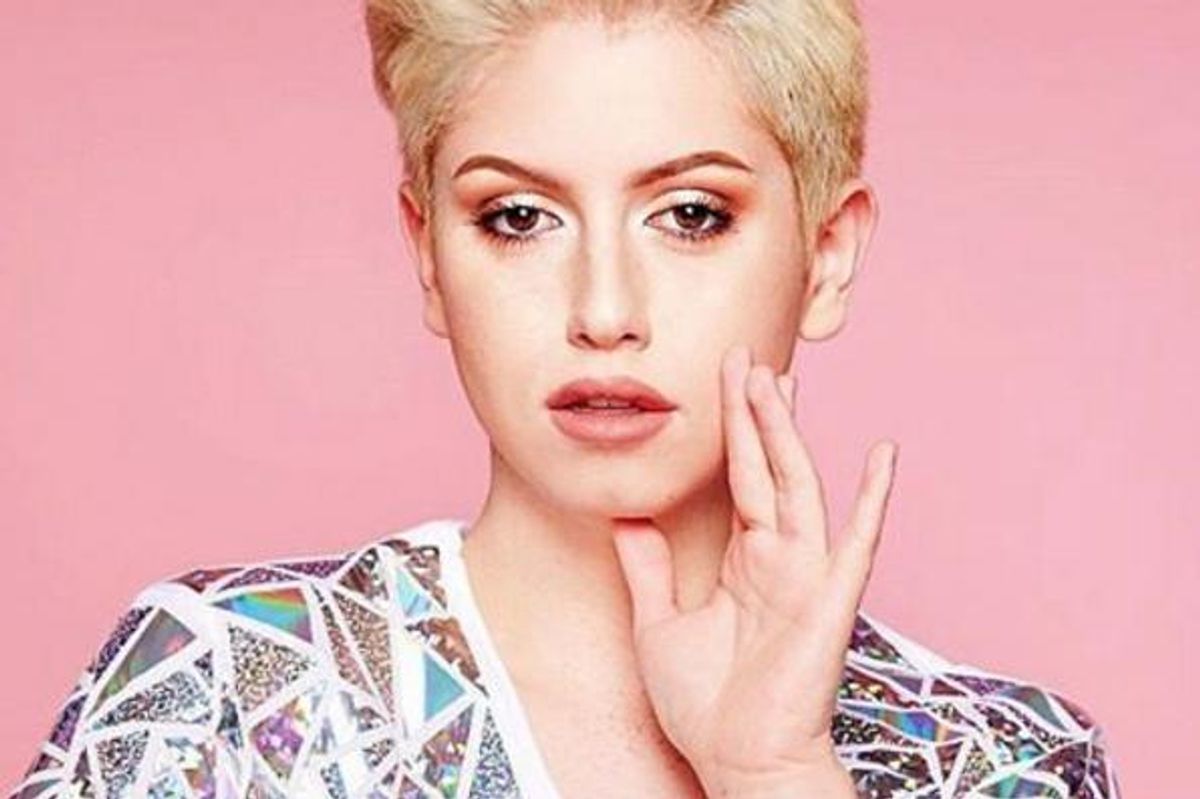 17 year old Brendan Jordan's fame arrived in an instant when his voguing in the background of a local news broadcast turned into a viral sensation. It might sound unremarkable, but Brendan's performance at the opening of a mall in his native Las Vegas stole the spotlight from the hosts. The Internet became obsessed with this young, Lady Gaga-loving, fierce and femme teenage boy.

Since then, Jordan has found himself with a large social following, including 200K subscribers on YouTube and 69K Twitter followers, an ever-growing YouTube channel where he talks Disneyland, Lady Gaga, and beauty tips, and a desire to share his spotlight. After a routine dental cleaning, Brendan Jordan hopped on the phone with PAPER to tell us all about defying gender norms, experimenting with his look, and the best moment of his year (hint: it's Gaga related).

You stole everyone's heart in 2014 dancing in the background of that local broadcast—you totally were the star. Did you go there hoping to be noticed?

Not at all. I didn't plan anything. I just saw the lights and the cameras and I've always been attracted to those, even when I was young. I was like, "Mom, I'm going to see if I can get an interview," since it was an opening. They weren't doing interviews, so I stuck around and did my thing.

When you were younger, did you perform a lot?

I was never really in something but I always loved performing, I guess. I didn't perform for anything specifically, but, you know, my character was just like that.

Your mom told me you take vocal lessons now.

I do musical theater, shows. I have to sing for those. At my school I'm enrolled in the conservatory. I had to audition for it. My major is in performance. My school just cares so much about the arts and invests a lot of money in it.

What is it like growing up in Las Vegas? Were you always accepted for who you are?

I've always been really outgoing and loud but whenever we had family gatherings I would always go to the adults, like "I'm too mature for the kids." I've always been an outspoken person. I always speak up on things I do or don't agree on. I've always been very talkative, as my teachers would explain to my parents in some of those parent-teacher meetings. I don't think that's necessarily a bad thing. I've just never been afraid to say what's on my mind, bad or good.

I think one thing that I love about you—and that so many love about you—is that your viral moment was one completely unlike a lot of the other young, male-presenting internet celebs, in that it was gloriously queer. A lot of male-presenting teens find recognition for only being, like, good-looking and marginally funny in a Vine. You became popular for being yourself. Is than intentional? Did you expect this to happen?

I've always wanted to be in the limelight. I know some people will take that the wrong way, but I've always been excited for the future. I'll always tell my mom, "I'm so excited for what's to come of me." I didn't know what was going to happen, but I knew I'd have a lot of people in my future because I love being around people.

I saw that you met your hero, Lady Gaga, this year. What did you say to her?

It was amazing! It was so spontaneous. I went to this event to see her perform and watch Joe Biden speak—but Joe Biden was kind of her opening act, for me, anyway. I saw her coming my way and I was thinking fast of what I was going to say her. It's been two years since [my viral video] so I used my full name to see if that rang any bells. It did! I said, "Hi, my name is Brendan" and she cut me off. "I know who you are! You're the one who did the whole dance!" And then she did it and it was so funny. She said, "We just wanted to say we love you so much, and you're such an inspiration to me and a lot of other people." It was everything to me to hear those words.

It's so great that she inspired you and you were able to reciprocate. As you said, it has been two years. What have you been up to? I know American Apparel reached out to you to work with them.

It exploded. After the video, there were emails from American Apparel—they must have been stalking me and saw that I love them. "We want to have you come down here and collaborate with us." From there, the drag community picked it up. Ru Paul's Drag Race and Ru Paul's team picked it up. From Ru Paul I met Miley Cyrus. It really is a chain reaction.

Are you interested in pursuing fashion or makeup? You've recently started experimenting with androgynous looks.

I'm interested in art. Modeling and fashion is another part of art. Anything to do with art I'm totally obsessed with. I'm so into andro looks, even for Homecoming. I had an andro Homecoming. I remember being as young as three and wanting to get into my mother's makeup. Later, I'd watch YouTube tutorials but never experiment with makeup myself. After [the video happened] and the drag community started picking it up, I started to learn.

You don't seem to care about gender limitations.

I really don't. My age group, and society as a whole, we all try to put labels on certain things. "What are you? Are you gay? Are you straight? Are you trans?" I'm not trying to diminish anyone for what they identify as. Me, as a person, I just love free will. I just want to be liberated. I don't want to strapped down by certain labels. To make things easier for everyone else, I identify as gender-fluid.

I watched a YouTube video where you discussed which bathroom you use—that lately you've been using the ladies', but you get looks using whichever one you use. Has that changed? Does it switch from day to day?

There's no silver lining. I remember this man stopped me once--I wasn't wearing makeup, I was in sweats at the airport and this man said, "This is the boys' bathroom." I said, "Oh, sorry" and went to the women's, where I got stares. I don't care, I'm just going pee. I've always thought the boy's bathroom is revolting.

Since this series focuses on all things teen, I have to ask you a few questions in that vein. What are your favorite social media platforms?

I definitely like Instagram and Twitter. Surprisingly, I've been getting into Facebook—I made a private one for my family. I've befriended people [who're famous because of social media] who've helped me. Remember, I was catapulted into this. I didn't get to learn. I've gotten advice from other people, become people's apprentice. I'm still learning. I'm not the YouTube master I want to be just yet.

You don't have a lot of free time, but what do you like to do to relax?

What have you been listening to lately?

Of course Lady Gaga's new album! What type of fan would I be if I wasn't listening to it? I just love any powerful, woman singer. Any woman that is just a woman, that is the kind of girl I love listening to.