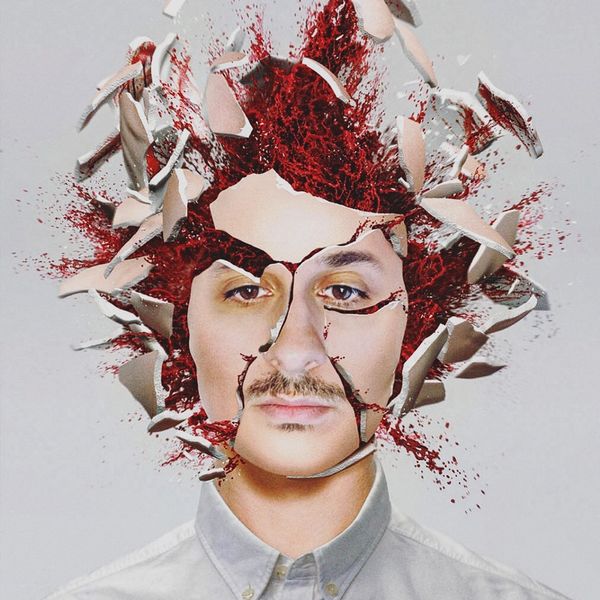 Could you imagine losing the love of your life, your home, stability, and close friends all within a few days?

This is the story of Brad Walsh, musician, producer, and visual artist, who, following the dissolution of his 11-year marriage to fashion designer Christian Siriano, entered a dark summer of despair. The monumental loss of all he held dear led to a suicide attempt, and time spent in a Connecticut psych ward to recover. It would be understandable for Walsh to completely go into hiding upon being released from the hospital for a while, and it can be argued that he did.

Walsh turned to music and, like an endless purge of raw, unfiltered emotion, he put all he had into his lyrics and production. The result, an ambitious 23-song project called ARTBREAK, doesn't hold back, as Walsh bravely explores topics including infidelity, jealousy, and, in the middle of it all, spots of true joy and recovery. "I just felt like I had been turned upside down and emptied," Walsh tells PAPER. "This album... just poured out."

Thankfully, he didn't go it totally alone: the album is full of guest spots from actor friends from Gabourey Sidibe and Lena Dunham to Janet Mock and many others, incorporating spoken word companion pieces to his tense but snappy electronic and pop compositions.

Listening to the album is akin to having a front row seat to a tragic pop opera, except everything Walsh sings about is real. It's a lot to unpack, but ARTBREAK feels like an important therapeutic exercise for him. In fact, there are intros incorporating quotes from Carl Jung and Oscar Wilde, so Walsh is definitely processing here.

Beefing up his production skills from his last release, 2017's all-vocal album, ANTIGLOT, the rhythms on ARTBREAK pull inspiration from dark and frosty new wave in the vein of Depeche Mode. "68 Steps" explores what it means to be alone, by finding solace in nature. Strengthened by gorgeous melodies, "Topper" pledges devotion to a "hunter, the finder of lost things," but because we know how Walsh's fairytale ended, there's an inescapable tinge of melancholy in his vocals. "The End" is perhaps one of the most striking entries, closing the album with a diaristic list of indictments against his former partner, calling out specific details of "whores in Texas," overdoses, and love tainted by fame and status.

PAPER caught up with Walsh, who is on the mend, and having finally let this all out of him, is free to enjoy his next chapter.

There are many impressive guest spots on here, from Janet Mock to Gabourey Sidibe. How did you decide which actors and artists would appear on which songs?

When I was in the psych ward last summer I had a lot of time with nothing but books and a bed, so I read a lot of Stephen Hawking and Oscar Wilde and wrote poetry in the margins. As you could probably guess, it was a lot of existential and fantastical thought put to paper, with a strong awareness of death — death not so much as the end, but as a change in consciousness. Training my brain to think in universal terms and to see beyond the mundanity of my immediate surroundings, with these writers as my professors, helped me immensely — and they inspired me to write.

A lot of those scribblings in the margins became song lyrics, most notably the song "Psych Notes," and a lot sort of stood on their own as spoken pieces. I am not a spoken word performer with any real talent, I don't think, so I knew when I started entertaining the idea of including spoken interludes that I wanted to invite friends of mine who are actors to really bring the emotions to life in performance. I chose pieces that I thought each performer would be best for, and I'm totally humbled that these people believed in me and wanted to be part of this moment. Most of the spoken parts are things I wrote, but a few — like Lena Dunham's Oscar Wilde quote and Cheyenne Jackson's Carl Jung monologue — were pieces that spoke to me so much when I read them that I knew I wanted them to be included.

The only guest spot that is included on this album that was not recorded specifically for this album is the Carrie Fisher intro to "Psych Notes." Her quote about "getting to the end of [her] personality" just stuck with me. She was one of the most beautiful minds, full of hope and coping through a lifetime of despair, always caring for other people when she herself needed care. I loved her so much and needed her to be present on my darkest and most personal expression.

"You can't schedule genuine feelings. Investing a lot of hope and expectation into a scheduled day of love is bound to be a let down."

Usually Valentine's Day is a holiday that commerically commemorates the joy and rapture of love. This release challenges that with something much more dimensional. What are your own feelings about Valentine's Day, especially as it relates to this album?

Valentine's Day is phony. And I don't mean that in a cynical "the world is shit" kind of way. I mean, even when I was married for a decade, Valentine's Day was a scheduled day to remind each other that we were in love. You can't schedule genuine feelings. It's silly to try. Investing a lot of hope and expectation into a scheduled day of love is bound to be a let down. So I wanted to reclaim this year's Valentine's Day for myself by releasing this album and having a Broken Hearts party. I have so much love in my heart and in my life, and I show and am shown it in many ways and at many times. I think any healthy relationship — whether it be romantic or a friendship — deserves spontaneity of expression, and I love to give gifts and send nice messages often, but only when I am inspired to.

In the midst of your personal heartbreak, it feels as though you left no stone unturned, addressing self-doubt, recovery, infidelity, jealousy, despair, and ecstasy. What felt most important for you to capture on this album?

I think the most nagging emotion that drew me to write this album, which ended up consisting of so many songs (10 didn't make the cut), was the despair I felt when in all one day I lost my marriage, my home, and my career. And soon after, I also lost two of my four very best friends. I just felt like I had been turned upside down and emptied. This album bubbled up like vomit, uncontrollably; it just poured out. Many of these songs were recorded in one take, which I think is apparent. They're not perfect, there's doubt in the expression at times, because I was deeply imperfect and doubting everything while I was making it. I think that desperation comes through on this album quite clearly, but so does hope. In songs like "68 Steps" and "Through the Floor," for example, I began to heal and build myself a new domain, slowly, piece by piece, and accept new beautiful people into my vulnerable stasis. I have since found new love and a great sense of self-worth and accomplishment, and one of the two lost best friends and I made amends and are closer than ever. She's as close as a sibling to me. I didn't really understand it at the time, but writing and recording this music was a thorough purge that exorcised a lot of negative feelings that were poisoning me. Art literally healed me.

Listen to ARTBREAK by Brad Walsh, below.