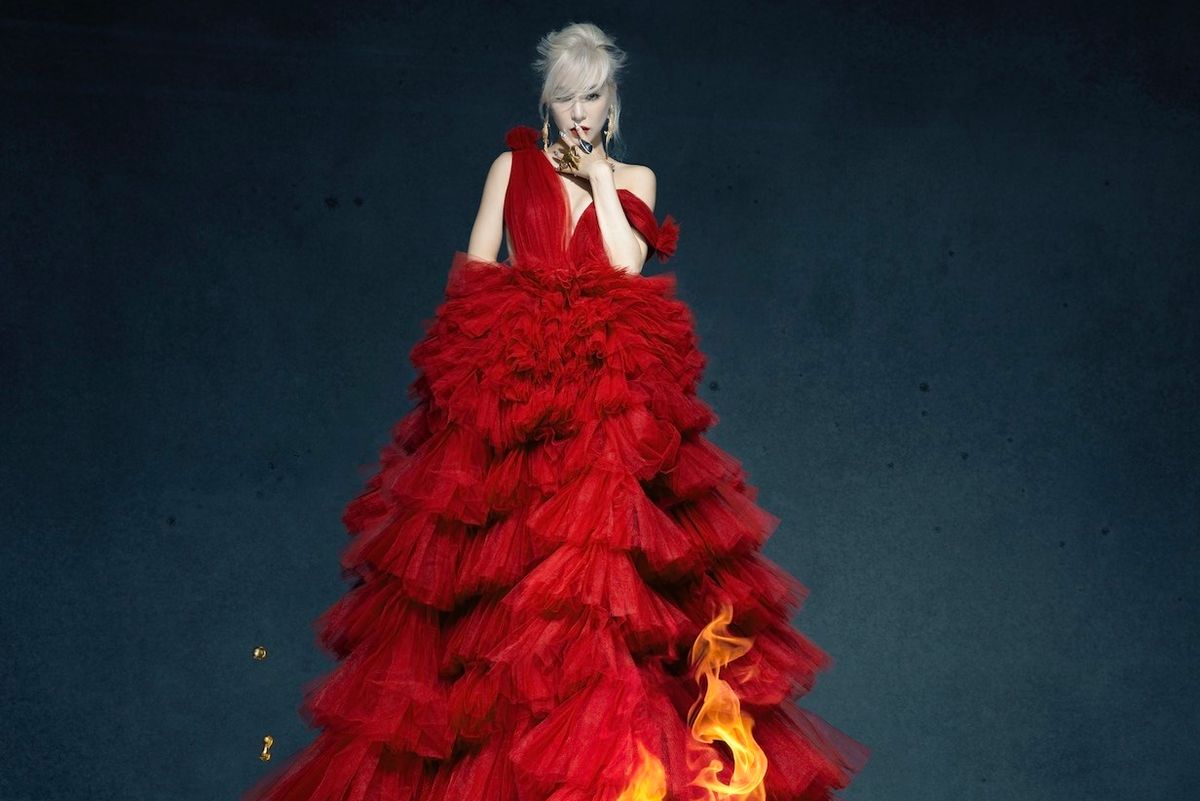 On Tiffany Young's new single, "Run For Your Life," she fills up space with moody synths and menacing vocals and lyrics about the dark side of ambition. The song marks a spooky new shift in Young's evolving sound, as she delivers lines like "I'm ice cold, baby on an ocean of glitter" with the resolve of someone determined to rise above any obstacles in her way. The anthemic chorus bears a nostalgic resemblance to Lady Gaga's The Fame Monster era, too, but as a solo artist, Young is carving out a space of her own, running from the past, embracing what's ahead. The “Run For Your Life" video is out now. Watch it here.

Kidd Kenn's "Babysitter" finds the teenage Chicago phenom gleefully acting up, rapping charmingly bratty lyrics about stealing boos and running off into the sunset, his crew of "pretty bitches" by his side. There's an ominous minor-key piano riff underneath it all, like a devil-face emoji, but it's offset by booming bass and a childlike "yay!" mixed in. If you find yourself mad enough about Kenn's antics to approach him, don't. He reminds enemies that his crew "watch to kill like they my babysitter." This is all to say that means Kenn's going to continue slaying, and — like a baby throwing a fit during feeding time — getting away with it.

There's a curious expansiveness informing the nine tracks comprising Kim Gordon's first solo album, No Home Record, out now. "Cookie Butter" is one standout example, which finds the iconic rock star, delivering poetic verse to a sparse track of bass thuds and clattering drum machine, before it mutates into a grind of furious guitars. Gordon's vocals, sounding both aloof and extremely present, allow for lines like "You fucked/ You think/ I want/ You fell" to seem like discoveries. It's hard to decipher what the song itself "means," but figuring it out disables the thrills of hearing Gordon find her voice as she goes along. And at six-and-a-half minutes, "Cookie Butter" yields constant discovery, not unlike the LA sprawl Gordon now calls home.

On 9, Lil' Kim's first proper album since 2005's The Naked Truth, the rap legend shows off a more versatile range with a collection of songs that feel more of-the-moment. Considering how long it's been since the Queen Bee's dropped new music, perhaps it's a smart move that she doesn't seem hellbent on proving a Big Point. "Bag" is an example of Kim cutting loose. She rides the beat with vocals that are half-sung through AutoTune and half-rapped, relaxed and here for the money, plain and simple. But make no mistake: from the sound of things, Kim's not hurting for it. She calmly invokes the laws of attraction: "Money wlll run from you if you chase it/ Just sit back and have patience." Good point!

NYC singer Juletta's "Strawberry" is grand in its sonic scope, encompassing romantic strings, bell chimes, jazzy piano chords, and midtempo beat that all grow more intense as the song progresses. Juletta's tender lyrics and vocals, both vulnerable and resolute, are the parts giving "Strawberry" its sense of wholeness, which is funny, given that it's a song about a person caught in perpetual limbo. But the devil's in the details: "I stick with a water and he buys another coke can," she sings. It's a haunted memory of a love lost, and a reminder that while some things change, others stay the same.

Sam Sparro is "Outside the Blue" on his spacey, sexy new single, the first to come from his upcoming, long-awaited studio album, due for release next year. The atmospheric, retro-leaning R&B track features blessed harmonies by twin-sister duo We Are KING. Sparro asks for honesty with a lover ("Say the words in your heart and color me blue") so together they might discover utopia. As the song progresses, the color "blue" changes meaning, at first describing a place of reliable sadness, before discovering blue as a space of tranquility. This song essentially lives there, in a peace that passes understanding. I guess good love can do that now and then.

I first met Minty.Ivy this summer in a remote forest in southern New Jersey, and she sang her twisted poems and stories into a vocoder before a bewitched audience. "Every Man Gots to Eat" is one of the tracks Minty performed, and it's just as strangely intoxicating recorded as it was live. There's dissonance between the track's intentionally disjointed, sparse instrumentation and Minty's warped voice, sad and mournful, as she repeats the track title as if in a trance. Maybe she's hungry? Maybe I'm hungry? I should eat something.

Related | 48 Hours With No Cell Service at Jersey's Weirdest Festival

NYC band Britton & the Sting shows off a flair for operatic rock in debut single "Burn." Lead singer Britton Smith ponders the likelihood of a world in flames, perhaps a commentary on climate change, or a meditation on what it means to live in the moment. Throughout, the drums build drama and the harmonies add high-wire tension. Smith gives us options on how to face the world's inevitable collapse: "You can be mad," goes one shrugged-off line, or there's hope: "Purify it all, start again." Maybe some other day, I'd be pressed, but today, I choose a silver lining. What's your choice?

In the lyrics of "Addicted," Yoshi Flower has tried everything, from learning to smile in pictures to seeing a shaman, and still nothing can dull the power obsessive love has over him. No matter what, Yoshi can't shake the feeling of a mysterious, alluring "you." And neither can we: the song's deceptively sunny melodies and abundant hooks, full of stuttered vocals and repetition, are bound to be committed to memory. We warned you.

Melancholy guitar chords and Lie Ning's emotionally-charged voice weave a tapestry for fantasy in "Secret Island," a cut from his debut EP Traffic Songs for the Inbetweens, out now. "We let the tide take away yesterday's troubles," he sings, offering to take his lover to paradise in a repetitive "let's get away" refrain. On a secret island for two, it's easy to revel in fantasy. There's a mournful sadness underscoring the utopia though. Will this vacation, whether real or imagined, truly last? There's always a point where paradise is interrupted, Lie Ning sings with a kind of pained knowing. Trouble may not last always, but after days of sun, it comes back around again, and what happens then? One can dream.