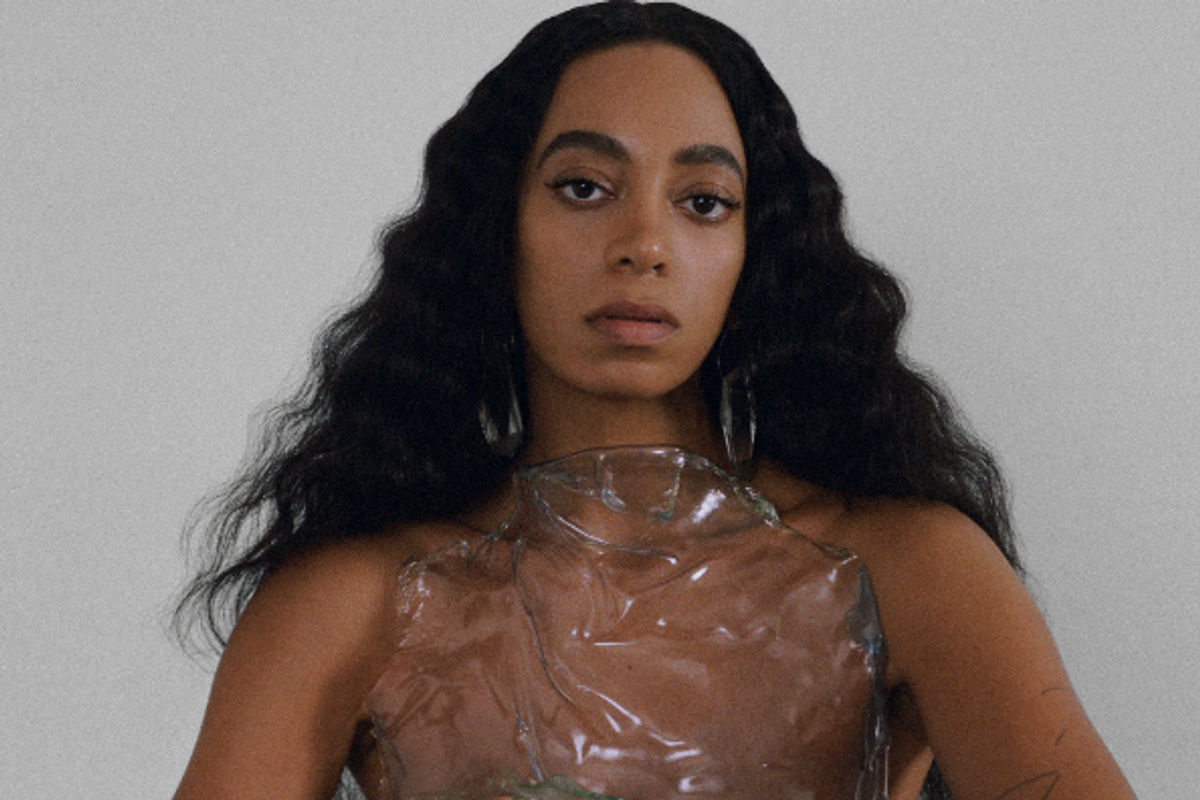 We were all pretty geeked when the increasingly avant-garde Solange announced that her new album was forthcoming last fall, full of jazz at the core, with beats to "make your trunk rattle." After a strategic, mysterious social media rollout that included taking over BlackPlanet (hey, fifth grade), the native Houston artist has finally dropped When I Get Home. It may take some time to really marinate in its plentiful layers of free jazz structures, lush vocals, and hip-hop beats, entirely written and executive produced by Solange. For "Almeda," though, enjoy some all-star instant gratification: complete with a clattering, Pharrell-led banger that just won't quit, backing vocals from The-Dream, Playboi Carti's hype-man yelps, and Solange, who is laid back in the cut paying homage to a Black area within greater Houston: "So pour more drank/ Sip, sip, sip, sip, sip/ Brown liquor/ Brown sugar/ Brown face/ Black skin/ Black Benz / Black plays / Black molasses/ Blackberry the masses." If 2016's A Seat at the Table celebrated the nuance of Black womanhood, tracks like "Almeda" and When I Get Home honors that experience from the place that made her, and with listeners as her witness.

The prolific 2 Chainz's fifth album since 2017's Pretty Girls Love Trap Music is out today. Aptly titled, Rap or Go to the League, 2 Chainz brings in abundance of A-team features this time around. One standout is the Ariana Grande-assisted "Rule the World," which boasts a flipped soulful sample of R&B singer Amerie's first single, 2002's "Why Don't We Fall In Love." The song works twofold; while being quite catchy and sentimental, it establishes the duo as artists who have earned their stripes. They sound on top of the world together, and we won't argue otherwise.

The latest peek into Marina's new conceptual album, Love + Fear, is "Superstar." The new direction of Marina (formerly Marina and the Diamonds) presents a clearer portrait of the artist than ever before, who is laying her heart bare with minimal soundscapes without forsaking the melodic pop that made her, well, a superstar. On this track, for example, Marina's evocative lyrics ("my love is a planet revolving your heart") work in tandem with her trademark operatic singing, mystical instrumentation, and an addictive trap-lite beat, all ingredients making for a deliciously catchy and meaningful tune. "Superstar" is less about fame than it is about being awed by love's all-consuming power, which is honestly something the world needs to hear more of. Thankfully, Marina is here to do just that.

Maluma, the Colombian singer and Latin Grammy winner, has been on a red-hot streak for some time now, with singles like "Borró Cassette" and "Corazón" establishing chart-topping crossover success. Today, he is back with a new, tongue-in-cheek banger. "HP," full of catchy reggaeton rhythms and a fun, subversive message about kicking back and cutting loose. "HP" is short for "hijueputa," or "son of a bitch," and is essentially, "a man who doesn't respect women." In the colorful Miami-based video to "HP," out today as well, Maluma and his crew keep things lighthearted and poke fun at this tired male archetype. The track is the latest from his upcoming album 11:11, and a tease at what makes Maluma's growing global stardom so inevitable. (He's reportedly working with Madonna on new music, too, if that's any indicator of what's to come).

HoodCelebrityy's new song "Inside," her first single since last year's release of her Inna Real Life EP, offers a more vulnerable side of the musician. Sticking to her winning formula of dancehall, hip-hop, pop, and reggae influences, "Inside" finds the singer challenging a suitor to show what they are made of. "I know what's inside of you," HoodCelebrityy sings. It's a seductive and rhythmic call to reveal one's true colors, a message we can all take something away from.

Chicago's Queen Key has, over the last few years, fast established herself as one of the city's most important emerging voices in rap. Eat My Pussy, Queen's breakthrough mixtape released last year was a seven-track series of assertive, feminist bangers that commanded respect. Showing that she's still more than worthy of that respect is "Can't Take It," which finds Queen stepping back onto her throne over a red-hot soul sample through a fiery flow that doesn't let up. On the track, she calls out cheap imitators who lack Queen's fierce sense of humor and timing ("These hoes ain't cut and I'm really bleeding"), while instructing would-be suitors on how she deserves to be treated ("Suck my heels/ Show me it's real, before reminding them, "I'm a business/ I told you boys, watch my feet"). Like royalty, of course.

K.Flay returns with her latest single, "Bad Vibes," a fizzy blend of jock-jam worthy rock and sugary pop. As we've come to expect from the musician behind 2017's Every Where Is Some Where, she swings for the fences to create an anthemic track about, well, refusing to be brought down. It's like Kendrick's "Bitch Don't Kill My Vibe" got a rockstar's facelift, and is designed to be the next song on your shuffle that either inspires you to roll the windows down on your convertible two-seater, or strut like you mean it. Whatever helps you shake off negative energy.

Speaking of not accepting less than you deserve, Bea Miller's new track with 6LACK, "it's not u it's me" is all about accepting responsibility for settling. Miller's honest lyrics and punchy melodies about realizing when, sadly, you're just not that into somebody, is a serious mood. But rather than pointing fingers, Miller acknowledges her fault in dragging things out, vowing to move on to something better. Her growth both as a person and as an artist here? Also a mood.

Emotional Oranges' newest bop "Corners of My Mind," is relatable in its melancholy. Have you ever loved and lost someone, but you can't get them off your mind, despite knowing that a relationship has fully reached it end? That's this stunner, which is fleshed out with hazy guitar licks and atmospheric sounds. "I know it seemed like you weren't enough," goes one lyric, before this heartbreaking line, "I can't forgive you no more." But is forgiveness possible when you still love someone too much to let go? Brb, we're all in our feelings.

Shy Girls, the alternative R&B project of Dan Vidmar, drops their third album in almost four years today. Bird on the Wing is full of graceful songs about love, fragility, and spirituality. "Hallelujah" is essentially built around a commonly used gospel refrain, but it stands in stark contrast to the lyrics, which seem to concern people in a state of confusion: "Loving in circles... Jesus can't help you now/ Poor man's praises... No one is left around." It's both sticky and thought-provoking — a modern meditation on the hypocrisy of refusing to acknowledge one's own limits, with god as your witness. How did we get here?