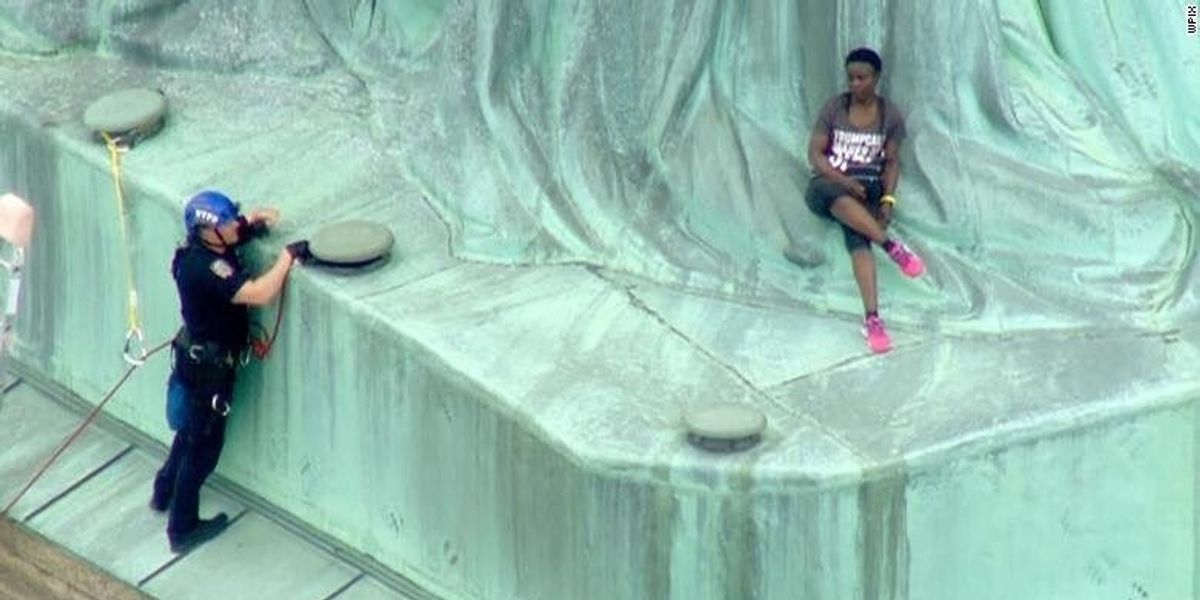 4 Moments Black Women Took Up Space and Changed the World

What do Ruby Bridges, Rosa Parks, Bree Newsome, and Therese Patricia Okoumou all have in common? They are Black women in America. They are Black women who pushed back. But most importantly, they dared to take up space when the world told them not to — and all of us are better from their example.

Let it be known that Black women as superheroes is not a new concept. In American history, they have always been among the most powerful forces behind social changes ushering the country forward, and yet, culture and society has consistently undervalued their contributions and attempted to eclipse their input by accomplishes of their male counterparts (especially their white male counterparts).

An example: Harriet Tubman's work for the Union army as a nurse, a cook, and a spy, and her creation of the Underground Railroad to freedom during antebellum slavery, which ultimately freed more than 300 slaves over the course of 10 years. Abraham Lincoln, a white man, issued the Emancipation Proclamation, an executive order that sought to abolish slavery as legal practice in 1863. It was a big step forward in theory, but in practice, the Proclamation actually freed few people, and applied only to southern states in rebellion to the federal government during the Civil War. Nevertheless, depending on who's talking, Lincoln's act sometimes gets credited as a move seemingly more significant than Tubman's efforts.

In modern times, outspoken women like California Congresswoman Maxine Waters frequently get bullied by President Trump. An often repeated fact (as it should be often repeated, lest we forget) is that Black women showed up for America's marginalized community at the polls on Election Night 2016, with more than 90 percent of them voting for Hillary Clinton, while many white citizens voted for the candidate who promised to Make American Great Again. Black women have always, and continue to show up (see also: last year's election of democrat Doug Jones to Alabama Senate; this year's powerful campaign run by Stacey Abrams, who is on track to becoming America's first Black female governor, and Georgia's first female governor ever).

Below, four Black women who have stood up and taken up space when they "weren't supposed to." Stand with them, and encourage them to take up as much space as possible. — because when Black women claim space, it changes the world.

When Black women claim space, it changes the world.

In 1955, Rosa Parks (1913-2005) went from woman to hero with one instance of taking up space that sparked a movement in the fight to end racist segregation. After a long shift working on her feet, Montgomery, Alabama seamstress Parks went from woman to hero when she refused to give up her seat on the bus to a white man so that she could then move to "colored section." This sparked the Montgomery Bus boycott, the 13-month long protest held by Black people to desegregate Montgomery's public transit system, which was a seminal event within the Civil Rights Movement, and led to the Supreme Court ruling that segregation policies on public buses was unconstitutional. Transportation is still being used to enforce racism by stopping primarily people of color from crossing our borders — whether by foot, wheeled vehicles or jumbo jets. Support the Arab-American Association of New York, which is partnering with other activists groups to fight the recently reinstated travel ban affecting Muslims, here. For ways to help immigrants embroiled by no fault of their own in America's current crisis, click here.

Ruby Bridges was born in 1954 in the Jim Crow south. 1954 was the same year that Brown v. The Board of Education passed in the Supreme Court in a sweeping 8-1 vote, which ruled that state laws establishing separate public schools for Black and white students was unconstitutional. At age six, escorted by federal marshals, Bridges braved violent white mobs throwing glass bottles at her feet to attend school at the all-white William Frantz Elementary School in Louisiana during the New Orleans desegregation crisis of 1960. She thus made history as the first Black student to attend an all-white public school, and was an influence on leaders of the Civil Rights Movement that followed. Bridges was a powerful example of the importance of integrating and diversifying the public school system.

But more than 60 years after Brown v. The Board of Education, the public school system is still separate but not equal: Expectations for Black students and how well they perform are generally lower than they are for white students, due in part to factors such as lower economic wealth, lower health, lower parental education levels, more dealings with the justice system (and bias held by many white teachers, which still makes up 80% of the educator population of public schools, according to recent data). The Trump administration is currently targeting diversity and public schools, rescinding Obama-era guidance on the use of race in college admissions. The Education and Justice departments also got rid of Obama-era documents encouraging public schools to, among other approaches, boost diversity through school zoning or admissions into competitive schools or programs. You can support the efforts Bridges made to integrate and diversify schools, by donating to the ACLU, which, as part of its many civil rights initiatives, fights the school-to-prison pipeline most negatively impacting young children of color from disadvantaged backgrounds.

Bree Newsome is an artist and filmmaker who captured the nation's attention in 2015 when she climbed the flagpole in front of the South Carolina Capitol building and lowered the confederate battle flag. The confederate flag was originally used in the Civil War by the Union army's opposition (Southern states) to fight the end of slavery, or our country's then-primary form of economic prosperity. It has since served as a symbol of American white nationalism, which is to say, those who still believe in the "white right" to designate Black people as second-class citizens or less. If you'll also recall, this was done in response to the murders of nine Black people in a Charleston church by then-21-year-old white supremacist Dylann Roof, who is now on death row. Newsome's heroic act occurred a week after the mass shooting; she was subsequently arrested and charged with a misdemeanor offense of defacing capitol property. The flag was taken down from the South Carolina Capitol grounds two weeks later following intense public and media scrutiny. Newsome has since spoken to numerous publications and on television about race-related issues, including the 2017 Charlottesville, Virginia terrorist attack coordinated by members of white nationalist and supremacy groups holding a rally called Unite the Right. The attack, which involved a car driving into a crowd of counter-protesters, left three people dead. You can support Newsome's initiatives by donating to Southern Poverty Law Center, which among other anti-racism services, updates a "Hate Map" tracking the existence and location of white nationalist groups in real time. (there are currently 954 active groups in America).

On the 4th of July, Therese Patricia Okoumou, a 44-year-old immigrant from the Democratic Republic of Congo climbed atop the Statue of Liberty as an act of resistance against the government's zero-tolerance immigration policies that have left untold thousands of children and parents separated and detained by ICE. Before climbing the statue, Okoumou took part in another action with the activist group Rise and Resist, during which they hung a banner from the Statue of Liberty reading "Abolish I.C.E." Separately, once atop the Statue of Liberty (which was a gift from France), Okoumou smiled and waved at passengers on ferry boats passing the monument, refusing to come down until "all the children were released." She was subsequent arrested and has since called President Trump “a monster,” citing Michelle Obama as inspiration for her recent actions. Okoumou held a press conference outside court where she is facing charges of trespassing and disorderly conduct and spoke about her unplanned protest. There, she referenced Obama's 2016 Democratic Convention Speech, saying to crowd applause, "Michelle Obama, our beloved First Lady that I care so much about says, 'When they go low, we go high.' and I went as high as I could." You can support Okoumou by donating to Rise and Resist, who is currently assisting with Okoumou's legal fees, here.