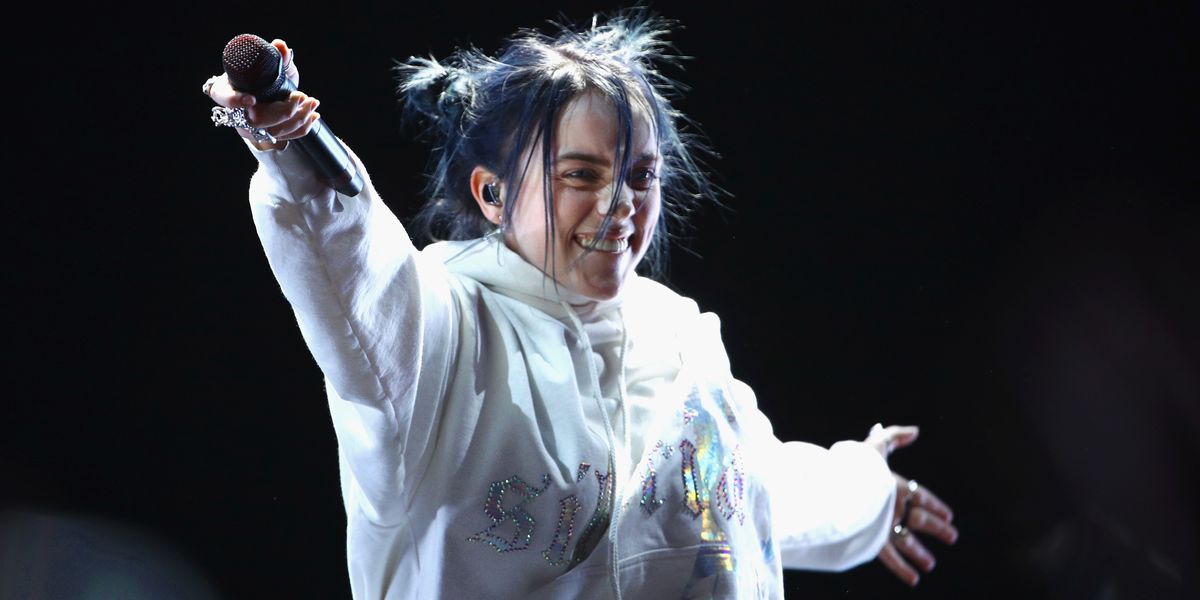 Billie Eilish's spooky, mumbling bedroom pop is already ASMR ecstasy (just listen to the feast of tingly whispers, snaps, tongue clicks, reverberating groans and voice cracks on "bad guy"). ASMR enthusiasts, and the rest of the world are obsessed. It's a quality that makes her music even freakier and sadder, part of what causes people to compare her to Lana Del Rey's aural sumptuousness (which Billie finds offensive... to Lana!) and is one of the reasons why there's no one else like her in pop.

But label reps aren't ones to pass up an opportunity to expand their market. As we learned in a new Pitchfork essay, her (okay honestly... brilliant) UK distributor Polydor tapped top ASMR star Gibi ASMR (who has 1.8 million YouTube subscribers) to perform a full ASMR read-through the Justin Bieber stan's debut album When We All Fall Asleep, Where Do We Go?. It posted on Gibi's YouTube and Spotify channels week after the album dropped, and has already amassed nearly 1.3 million views.

It's a work of art. Gibi kicks off the 40-minute song-by-song video, which features costume and themed set changes, by literally removing her Invisalign, just like Billie does slurpily on album opener "!!!!!!" ("get it?? I hAVE inVISALIGN TOOO" Gibi says gleefully in the video description). Over a million people have tuned in to hear Gibi whisper Billie's melancholy lyrics, complemented by the sounds clicking nails, waggling fingers, turning pages, and rubbing a sweatshirt make when picked up by hyper-sensitive pop rocks. She loads her mouth with Pop Rocks for sizzling back-up vocals on "xanny." I particularly enjoyed the hairplay on "you should see me in a crown" and the sounds made with a Nintendo controller on "ilomilo" (which is named after an X-box game).

Gibi did the entire project for free. She tells Pitchfork she wasn't paid, though she did get concert tickets, but that she was happy to do it, as a longtime fan. Pitchfork writes:

"Over email, Gibi tells me that she first discovered Eilish through an ASMR cover of her song "lovely." Then, when When We All Fall Asleep came out, Gibi was contacted by someone at the singer's UK distributor, Polydor Records, and asked if she was interested in performing a read-through of the album. She immediately said yes. "I hope [Eilish] enjoyed the video and it didn't freak her out too much!" Gibi adds."

Gibi also described her process in the video description:

"OKAY I already wrote this description once but YouTube is the worst so here we go again I hope I don't forget anything!!! ANYWAY — I was literally listening to a Billie Eilish song (i kid you noT miss me with it) when I got this email to do a video for her new album and I was like YUP and spent the entire week shooting and editing and I know its late but I really hope you enjoy it ;-; She is so freaking talented I hope I did a semblance of justice to the album and its a cool ASMR experience for you! I had a lot of fun actually using my camera and lights to their bigger potential (as much potential as one girl + a Ben in a room have) and it gave me a lot of ideas for future videos :') Thanks for watching, all."

Gibi promises "the more you check out [Billie's] content, the more easter eggs you'll find" in her version.

To be clear, Gibi isn't the only ASMR performer inspired by Billie, as Pitchfork points out. Billie's long been an ASMR icon and lots of videos inspired by her existed before Polydor got in touch with Gibi. Popular ASMR star SophieMichelle offered her take on When We All Fall Asleep a week earlier.