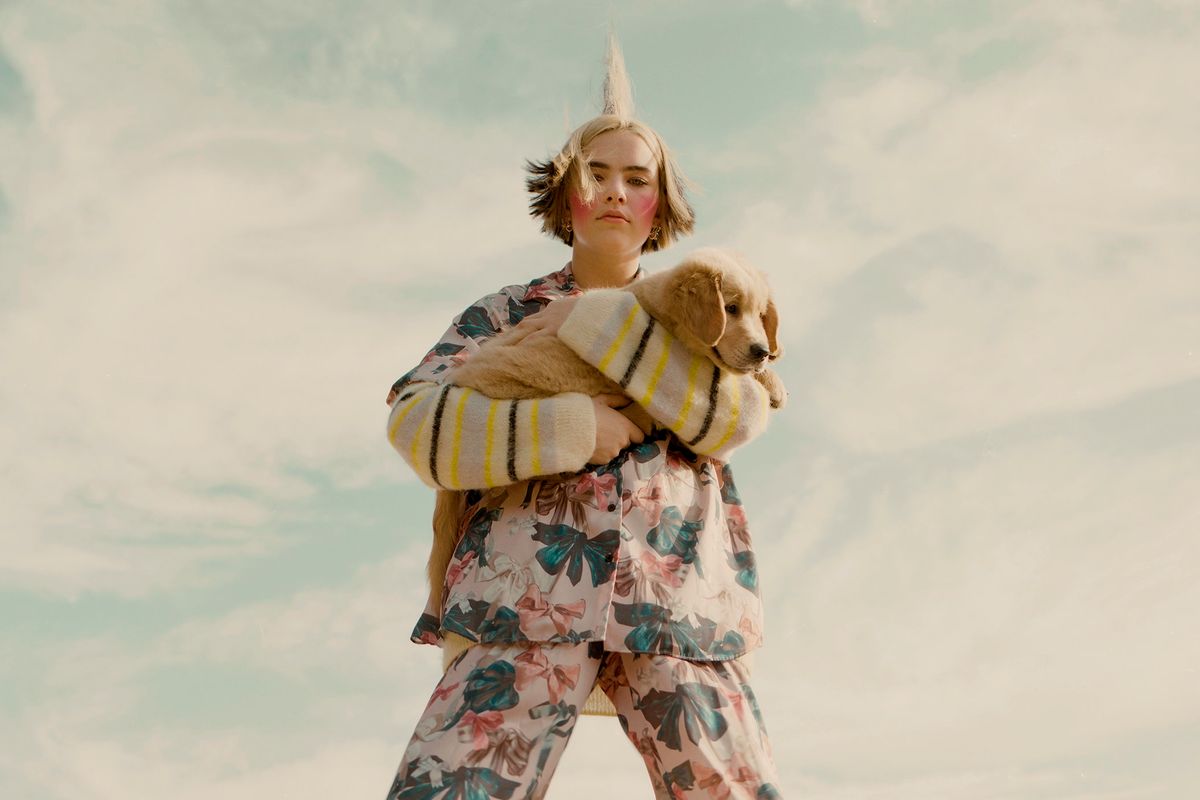 It's no coincidence that a song called "Supalonely" is one of the most popular songs on TikTok during an era of self-isolation and social distancing; it's also no coincidence that 20-year-old New Zealand breakout star Benee wrote it. The second track on her most recent EP Stella & Steve, "Supalonely" is a clicky pop song that fits squarely into the elevated bedroom pop sub-genres that have emerged as victorious among Gen Z listeners in recent years.

"I'm a lonely bitch," Benee says, punctuating her post-chorus la-la's with a type of blasé and self-deprecation that points to a concealed yearning for connection. Between the daydream runs that bookend the chorus, however, is the crux of the TikTok dance trend that the likes of Charli D'Amelio and Emma Chamberlain have indulged in this past month. Shoulder pops, pearly smiles and hip rolls are hallmarks of the cheery viral dance — a clear alignment with the bright acoustics, but not the lyrics.

Benee is just naturally attracted to sad songs, though, she says. Funk guitars, tambourine claps and all, she's still able to hone in on and perfect the making of a "sad banger," an increasingly popular category of songs catapulted into the mainstream by artists like Mark Ronson on Late Night Feelings. Similar to her contemporaries, Benee admits to wanting to write from experience, so her tracks often sound like glimpses into depressive episodes rather than celebratory bops.

For someone who began her career doing covers on SoundCloud and writing in her bedroom, the intimacy isn't stunted. Songs like "Blu" ("Don't look pretty when I cry/ Do you feel bad when you lie?") and "Find an Island" ("Find an island far away from me/ A shipwreck lost at sea") feature the same sort of uptempo melancholy. It's surround-sound honesty, another prime example of pop-gone-wild as we head into the new decade; for a genre that's propped up to be widely palatable, artists like Benee are subverting it to be hyper-personal.

Continue on to read about Benee's journey from bedroom songstress to studio maven, the blurred lines of pop in the new decade, and the viral success of "Supaloney," exclusively for PAPER.

I've been in an amazing rut of downtempo electro-pop lately. Is that how you would typify your music?

I go through phases — a little of a mix, which is most likely indie-pop. I'm really into making music that I'm interested in, but then also trying to convey R&B with pop melodies. I'm trying to do a mix of it all.

It's very of-the-moment too, because nobody's really making one genre.

Is there an artist who stands out for you that does this perfectly, this crossover of many different Gen Z genre blends?

I feel like James Blake is someone who has been an inspiration to me for a very long time. I do like the electronic elements, and kind of giving them to trap and like hip hop now, collaborating with big rappers and stuff. I feel like he's done a pretty good job of mixing genres.

For Stella and Steve, what were you looking to distinguish it apart from the first EP?

I don't know. I just know that I'm constantly trying to make a different-sounding song. When it comes to making EPs, for these last two, I wasn't really thinking about how the EP would come to be when I was making the songs. When I'm making a body of work, I like the idea of being able to pick songs of mine that I already checked and build them up and arrange it again. I think of it as like a puzzle, how it all fits together. I like the idea of being able to put "Supalonely" and "Blu" together. They're written about the same thing, but with very different ideas.

Do you prefer the EP structuring, where it's succinct? Or has a full-length album always been the pinnacle of creation for you?

Sometimes doing the EP is a lot of work, but I want to make the album. I'm looking to make an album now, I think. I've done my EP, I've done that, and now it's kind of a bigger "something" to work towards.

It mirrors from where you started, with GarageBand and the SoundCloud releases, to now these sort of mastered track worlds and new wealths of resources.

It's been wild. To be honest, when I was making my SoundCloud stuff on GarageBand, I had no idea what working in a studio would be like when I was with a producer and recording my vocals properly, but it's been awesome. Being able to work in a studio, I love it, it sounds so much bigger than doing it at home.

Were you familiar with a lot of the larger production tools, or is it all still a learning process for you?

No, I'm still terrible at working with Logic and stuff. My producer, Josh Fountain, kind of taught me how to navigate myself around it all, but someone could tell me how to produce a song and it would not really work out very well.

Are there sounds or genres that you want to explore that you feel like you're still learning how to craft. A lot of writers find it a bit harder to resist pop structuring.

I always lean towards making more pop-y songs because they're a lot easier for me. The more indie and sad songs I really enjoy making, and I think that making a song like "Blu" was like nothing I had ever done before. I've always wanted to make a rap song, but I can't rap. I really want to make a cool hip-hop song. I've trial'd a bunch, but it just doesn't work, but it might in the future. I really want to experiment with different genres.

What attracts you to making these songs that are lyrically sad, but sound happy.

I just love sad songs. They flow so easily. It's so easy to pause and feel these depressed and sad emotions and just to write about them. I prefer writing these sad songs, which is kind of weird.

Where does that comfort come from, because you were a bit more isolated in your songwriting process prior to getting into a studio?

It's very much me becoming more comfortable in the studio. I don't think when I first got in there, I wasn't sure if I would be able to do "Supalonely." It's about becoming comfortable, forming this relationship, telling the producer what's going on in your life and what you're going to write about. I think I'm just drawn to the feeling of being super sad and just writing songs about it.

What was it like getting Gus Dapperton to have a feature on that track ["Supalonely"]?

I had the song, already written. I thought that it was finished. Me and my guy Dan from the Republic, he's my A&R guy, he's mates with [Gus]. He had lunch with him and showed him the song and he was just like, "What would you think about Gus coming in and building something on here?" I was just like, "Oh my gosh, what about a bridge?" and it just happened. I'm a big fan of his work, and had been for a while.

Do you find that you and Gus match up from time-to-time in terms of occupying a similar pop sound space?

I feel like he's also kind of experimental in the way that he's playful with his work and he's got pop elements and an indie vibe going on. Overall, it's just a fresh sound. He brought a lot to the song.

You also seem to have a very solid aesthetic vision for yourself and your videos. Do you see style and sound as going hand-in-hand?

I think that style has become something that is more experimental within music. I think there's a line, and it's also just another way that you can express yourself. It adds to the sound — it adds to the movement.

Have you seen your style change as you've been putting out the EPs? Or is your fashion sense pretty core to you?

A little bit. To be honest, working with stylists — they're kind of like a teacher, telling you about all these like brands you've never heard about before. I've found out about all these different kinds of designers. Same with the "Supalonely" video, I'd been working with a stylist named Sarah, and my style has definitely changed.

The way you come up with ideas for your videos, is that similarly collaborative?

Definitely. It does change depending on who I'm working with. With the "Glitter" music video and the "Soaked" one, which is an old one, I was super hands on. I made a Pinterest board, where I had this idea in my head of what I wanted it to be. For the "Supalonely video, I talked to the director, ROME, and I told him exactly what the song was about, gave him other contexts about it as well. He got to see what it was all about, but I have gotten more creative control.

Do you enjoy the filming process? That's a whole new experience compared to making songs at home.

It's very hard work, especially the "Supalonely" video, and for some things we'd be up til 4 AM doing stuff and we're very tired, but you do it and it ends up being cool.

One of my favorite questions to ask is what an artist's favorite song to play on their setlist is. Do you have one?

I think it might've changed. I recently toured Australia, and "Glitter" was going off of TikTok, and it used to be my other song "Find An Island," that when I played that everybody went crazy, dancing wild. Now it's "Supalonely."

How crazy has that TikTok-ification of your songs been? People just have your song at their fingertips to use.

It's crazy, man. I didn't even know it! I didn't actually completely understand the app until a few months ago. I'd be getting people on Instagram DM'ing me, and scrolling and seeing all the dance videos, seeing that Emma Chamberlain made a video to it. I used to watch her YouTube videos, it's crazy!