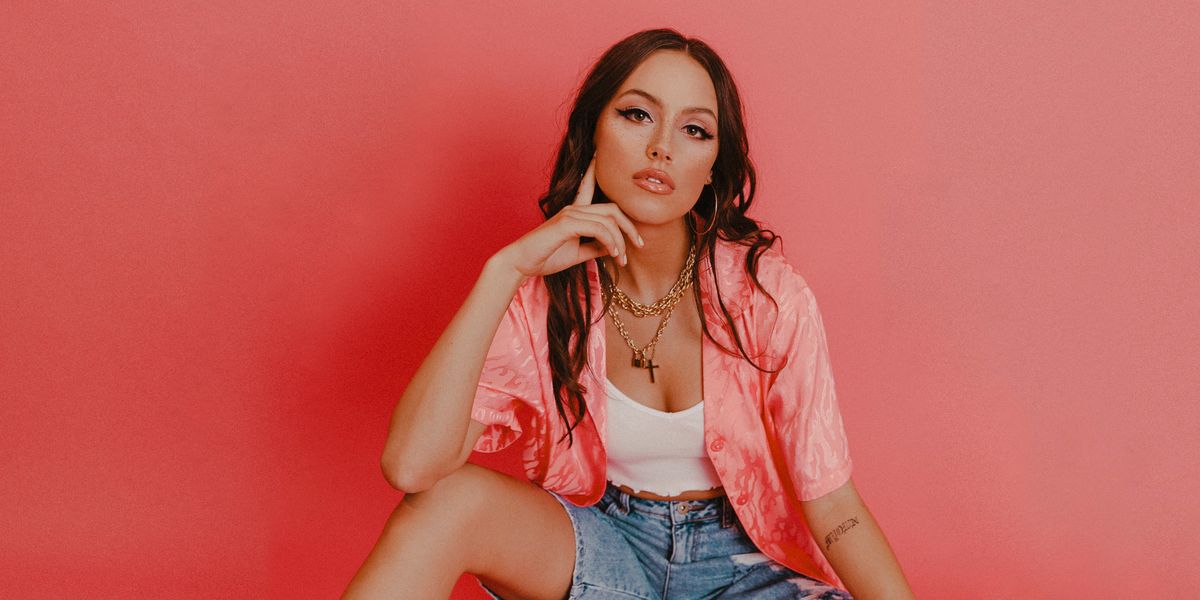 In a world of bad bitches, singer Bailey Bryan prides herself on being a sensitive bad bitch. But she wasn't always this way.

In an essay for PAPER, the musician reflects on a Rihanna song — off Anti, of course — that served as her awakening toward learning to embrace vulnerability in her personal life and work.

Echoing these ideas is Bryan's new single, "Steal Your Girl," which spotlights her ability to balance unabashed confidence with honest, self-reflective lyrics. "I'm gonna steal your girl/ That's what I'm gonna do/ If I can't have you," she warns on the sensitive bad bitch anthem.

It's 2020. If you have the slightest interest in pop culture and spend any time at all on the social medias, you know that it's a bad bitch's world. Unabashed confidence and savagery are the trends. We don't try and squeeze into boxes. We care for ourselves first and we don't apologize for it. We get money! Mostly figuratively because rent and things like college cost a trillion dollars and stuff... But still. In a lot of ways, this mindset is a silver lining for a whole generation — a seemingly pretty positive image for young people to want to mirror, from a self-love standpoint. But if you're like me and you've found yourself feeling a sort of pressure to start loving yourself fully overnight, and you've maybe beaten yourself up a bit for not being "there" yet, you're not alone.

I believe that my own bad bitch awakening began in 2016, when "Needed Me" by Rihanna, came out. The intoxicating energy of that song stirred something deep within me,and I started to realize that I, Bailey Bryan, was not a "bad bitch," by what I perceived as the classic definition. I felt every line of that song right in my gut, even though I could not relate to a single word. In fact, it's highly likely that I had just finished texting an entire novel to my boyfriend at the time, apologizing profusely to him for having my own needs and feelings. I'm talking the kind of text novel that should be multiple paragraphs, but you decide to make it one long one run-on sentence, because for some reason that feels better than admitting that the amount of feelings you have need to be separated into at least seven different sections. I don't know who needs to hear this, but they're never gonna read the whole thing girl, put your thumbs away.

Related | For Babygirl, Love Is Like a Demolition Derby

I digress. This moment, listening to Rihanna's "Needed Me," was one of the first times that I longed to be a bad bitch, but felt it was unattainable for me. My self-image had never been completely negative, but I've struggled with some body image issues, fallen victim to my own codependent tendencies leading to all kinds of situationships, and for as long as I can remember I had sort of been living my life from a place of high-functioning anxiety all the time. Basically being an out of control empath and crying a lot are major corner stones of my personality. In my mind, because of those things I fell miles short of the necessary criteria. I had confidence, but I was far too messy. Looking back, I think this is because I was always basing my idea of a "bad bitch" off one facet of somebody else's persona — always listing to songs, scrolling through my phone and looking at singular unattainable images.

My perspective on this "criteria" began to change when I started making music that I really love — music that reflected all of the messiness that is me, inside and out. Previously, all of the aforementioned elements of who I am felt like too much to honestly weave into my songs or even into my image as an artist or human in general. That feeling caused me to try and write songs for identities that I thought might be more attractive or aspirational to others. I wanted to portray one of those singular images that said "I don't get hurt because I love myself," and, "I may not be perfect but I am 100% in control and at peace with that." But that wasn't real and nobody cared. So I stopped. Cue, the birth of the sensitive bad bitch. The more I started being honest and open about all the different parts of me, the confident and the insecure, the pretty and the ugly, the more badass I began to feel.

The unhealthy corner of pop culture would have you believe that there is a long list of edits and changes that need to be made before you can achieve that trendy and coveted bad bitch status. How else would they capitalize off it? But if you look at the most iconic bad bitches of today — Lizzo, Rihanna, Billie Eilish, Ariana Grande, in my opinion — you'll notice that none of them appear to be looking to anybody else or buying into any kind of formula for how they should be. And they certainly don't hide their feelings or struggles. They instead celebrate those things by presenting them with confidence. Still, maybe easier said than done, but a whole lot more rewarding than faking it. For me, this looks like writing songs about insecurities I've had and mistakes I've made, and the things I've learned from them. It looks like pretty much always having something I'm working through, but therefore always getting stronger. And doing whatever I can to let people know that vulnerability and confidence are not mutually exclusive. Because the real bad bitches, are sensitive bad bitches.

Related | Zedd and Griff Talk 'Inside Out' Collab

So, my unsolicited advice to those of us who are struggling to find identity within the blueprints of social media, our idols or the world? Screw the world. What are you passionate about? What feels bigger than all of that stuff and makes you feel like you? Find that shit out and then own it. Oh, it's not clean and covered in rhinestones, you say? Oh, you don't have it all the way figured out yet and you maybe cry a lot still? Welcome to the journey of the pursuit of confidence. And congrats, you just might be a sensitive bad bitch.

Stream "Steal Your Girl" by Bailey Bryan, below.