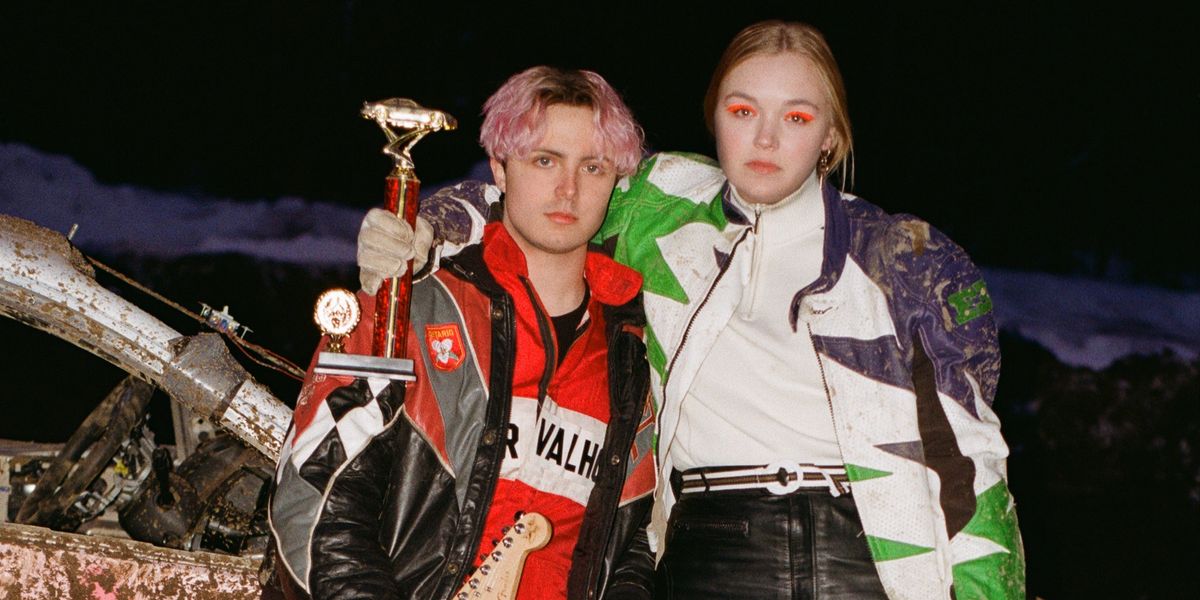 Unrequited crushes can easily be exhausting — but if played right, there's something undeniably addictive about the game. "It's about how attractive unavailability can be," says Babygirl of the pop-rock band's new single and music video, "Easy," out today. "Especially if it's kind of what we think we deserve."

Related | Woman From a Magazine Chats With HAIM

The smooth, guitar-led track is written from the perspective of someone on the wrong side of a love affair, singing about how "Mr. Nonchalant" makes it look so "easy" to leave. "It's okay if you tear me apart," sings Kirsten "Kiki" Frances (one-half of Babygirl). "Cause that's my favorite part."

The video, directed by Dylan Mitro, might at first seem like it's detached from the themes explored in "Easy." For Babygirl, however, the demolition derby provided a complement to lyrics about building something to eventually demolish for fun. The band's other half, Cameron "Bright" Breithaupt, called the sport "recreational self-destruction," while Kiki added that "it speaks to how chaos can be fun, as well as harmful and destructive."

Related | Winona Oak Is Coming for You

Beyond "Easy," Babygirl previously released their 2018 EP, Lovers Fevers, which featured the buzzy single, "Soft," that eventually got the two signed to Sandlot Records. Having first crossed paths in high school — united by a love for Lil Wayne — Kiki and Bright have built a singular sound that draws inspiration from Taylor Swift to blink-182. They even co-produced Lauv's Alessia Cara collab, "Canada."

Watch Babygirl's "Easy" visual, below, and learn more about the rising band as they gear up for a year of new music in 2021.

How did "Easy" come together?

Kiki: The initial inspiration came from a writing session with a friend of ours, Emily Rose, who is also an artist. Basically, we wanted to write from the perspective of someone that is completely enamored by somebody that is not so interested in return. It's that power dynamic of when you're the person in the vulnerable position of liking someone and they're indifferent. The song is about just how much that can color the way you're perceiving the relationship. "Easy" is all about how much it sucks to want someone that doesn't want you back and wish that you could be as nonchalant as they are about the whole thing.

Bright: But, also, on some level, maybe you're having a little bit of fun with it all.

Kiki: It's nice to have that feeling about somebody, but "Easy" is about reveling in that feeling while also acknowledging how awkward it is.

Bright That was all Dylan Mitro's vision. He was the director. It was his idea to do a demolition derby. He was like, "Okay, I heard the song and I was thinking... demolition derby?" We rolled with it.

Kiki: Yeah, we were like, "Perfect. We don't need to hear any more ideas."

Bright The video team went about sourcing the derby.

Kiki: In northern Ontario. We found one a couple of hours outside of Toronto.

Bright In a town called Gravenhurst. We got this dude Don from this small motorsports company called Edge Motorsports on board. He helped us with modifying the car as there are various modifications that have to be done to make it safe to drive.

Kiki: Which is also why I got to bash out the windows because, in order to enter a car, you can't have any glass. Don was like, "Yeah, if you want, you can smash the windows out." I definitely did want to do that — and I wanted to film it.

Bright He was very helpful as a consultant on making sure that we were doing everything properly.

Kiki: His wife was actually the stunt driver in the video so, as a team, they helped us make it all happen.

It's interesting how the video concept isn't directly tied to the song lyrics. Was that intentional?

Kiki: I like things that are a little subtler and we thought that if we did something too on the nose it wouldn't be that interesting.

Bright We didn't want to do anything hyper-literal that had Kiki yearning for some dude in a leather jacket or whatever. On some level, the idea of actively participating in building something so that you can destroy it — it's a bit of a masochistic lyric on some level. A demolition derby is recreational self-destruction, so maybe there is some sort of subtext that connects it to the song, but it's not too in your face.

Kiki: I think that you can draw your own conclusions because it's not so literal, but it speaks to how chaos can be fun, as well as harmful and destructive.

You describe your sound as "pop songs with sad guitars." How did this come to be?

Kiki: We have a lot of different things that we draw from. In terms of the guitar sound, I know that Cam is often referencing The Cure and Death Cab For Cutie. There's this band Turnover that we really like.

Bright Alvvays — great Canadian band — that was very important in the formative years of the project.

Kiki: As writers, we have certain writers that we admire, too.

Bright We grew up on the Max Martin songbook, so that's really important to us. That type of melodic and lyrical stuff. Taylor Swift is a big one for both of us. We definitely came together as a songwriting team around pop music first and the sad guitars followed closely behind.

Kiki: I think we both had our emo phase and it never really ended.

Bright It's not a phase, mom!

As songwriters, where do you think your perspective comes from?

Kiki: Overall, we're not afraid to edit. We're not afraid to write a lyric a hundred different times until it's absolutely right. We're both individual writers, but I think we just inherently understand what our style is as co-writers.

Bright We have a shared compass for our taste in lyrics.

Kiki: We just know when it's right and know when it's wrong. Overall, we don't want our lyrics to be boring. We want them to have personality. We want that perfect harmony of sentiments that you've already heard while presenting things in ways that maybe you haven't heard. We try to combine both of those things.

Bright Sometimes when we use simple melodies, maybe those are the times that we use slightly more nuanced lyrics. It's a balancing act to make sure it still feels pop enough, but it's not "safe."

Kiki: Katy Perry is definitely a reference for us in that world. She tows that line where sometimes she says something and you're like, "Wait, can you say that?" in a lyric. We like the instinct to maybe say things that you feel like you shouldn't say.

Bright We have a fearlessness, to be specific. I think it's a really important guiding principle for us in songwriting. We think that it increases the relatability of a song.