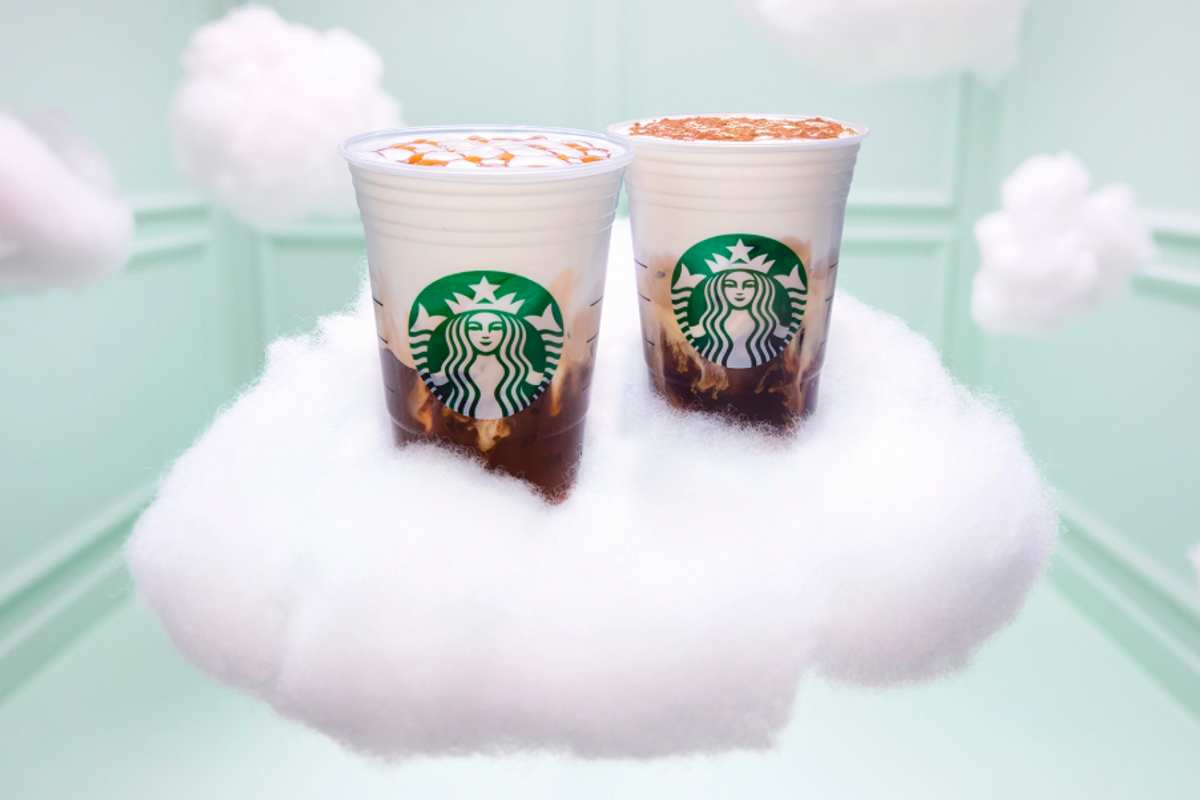 When Ariana Grande first hinted that she was partnering with Starbucks to create her own exclusive drink, I wanted to be angry. I think we all did. Unfortunately, even though hating capitalism is trendy right now, loving Ariana Grande is trendier — so it was hard to stay mad for long. Grande is a tiny, talented angel, and essentially beyond reproach. Is there a jury in the country who would dare indict her? There is not.

Yesterday, Starbucks and Grande officially launched the Cloud Macchiato with a series of candid-seeming photos: Grande wearing a Starbucks apron, Grande sipping from an eco-friendly green metal straw, Grande pausing to smooch a passing dog while holding the drink in her free hand. She looked great.

Today, I obtained my very own Grande-endorsed drink (iced, cinnamon flavor, grande size, strawless option). Before you rush out to purchase one for yourself (NOTE! They are NOT available from Starbucks express locations, as PAPER found out the hard way), here's what to expect.

I like how the Cloud Macchiato looks — its aesthetic layers of coffee and foam and cinnamon are indulgent and ridiculous, a throwback to the Starbucks frappuccino heyday, that reckless era before we all switched to cold brew. Given Ariana Grande was involved, it must have been tempting to go down the unicorn latte route and add, like, rose gold sprinkles or something. Instead they stuck to a more restrained and traditional color palette, which was smart.

Although you can technically be a psychopath and order it hot, the Cloud Macchiato is definitely a warm weather beverage that should be served over ice cubes that clack together pleasingly as you sip.

The price is completely unreasonable, however mine was expensed.

Glad you asked! The "cloud" aspect of the Cloud Macchiato refers to Ariana Grande's favorite emoji, and also a new technique where baristas create a thick foam topping using egg whites and milk. Starbucks did not invent this, obviously — as a press release admits, the "cloud" draws inspiration from Spanish dessert staple leche merengada, or "meringue milk." You may also be familiar with the concept from cocktails, but unfortunately the Cloud Macchiato is non-alcoholic.

I enjoyed the cloud consistency, but will say that it comes at the expense of actual drinkable liquid. If you slurp too fast, all that's left in the cup is ice and foam, AKA egg-flavored air. Also the lingering sense that you should have ordered a drink designed for adults, not 13-year-olds hanging at the mall.

There are actually two Cloud Macchiato flavorways: caramel and cinnamon. I went with cinnamon, because Internet research confirmed that the caramel version is pretttty much the same as a normal Starbucks caramel macchiato, just with the extra fluffy foam on top. To me the cinnamon-flavored drink tasted more like horchata than coffee, but it also tasted more like sugar than horchata. Guess they added some SWEETENER? Ha, ha.

But also, for what it's worth, the sugary taste wasn't as overwhelming as expected — especially once the ice had melted a little. (Ongoing office heating issues here at PAPER convincingly simulate a steamy New York City summer, so I was testing the drink under ideal conditions).

What My Co-Workers Eliza and Justin Said

"It was kind of embarrassing to order? Is that worth noting?"

"I felt bad for the man making it because he had to blend something and it disrupted his flow."

"I did like it! In the end, it was a delicious drink. A bit sweet? Yes, as many Starbucks drinks are. But I don't think Ari is to blame for that."

"A fluffy egg white cloud in your morning coffee? Imagine a world like that."

I can't blame Grande for capitalizing on the fact her name literally corresponds to a Starbucks cup size. I really can't. Having studied many of her paparazzi photos over the years, I'm certain she generally avoids milk-based Starbucks drinks anyway (she's a cold brew gal), which makes this whole collaboration even more of a chilling and cynical charade. One has to respect it!

Ultimately I thought that the Cloud Macchiato tasted like any other novelty Starbucks drink: overpriced, sickly sweet, and inherently basic — but was perversely enjoyable for those same reasons.

I also think it would be funny for Peet's to do a Pete Davidson collaboration as a viral stunt, but would like a cut of the profits if they steal this idea.