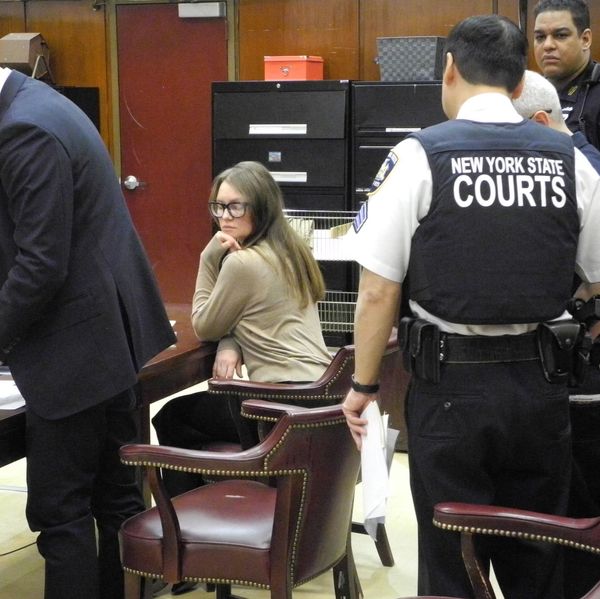 Who wears a choker to court? Anna Delvey does. The famed pseudo-socialite grifter glided into Manhattan's Supreme Court yesterday dressed with the perplexing and iconic self-assurance of a true scammer queen. Rather than pander with stark turtlenecks, demure sweaters, clean white button downs or serious suits often donned by the publicly shamed, Anna opted for black chunky hot-nerd girl glasses, a cleavage-baring black sleeveless dress, tights and ballet flats. Her notoriously disheveled red hair was transformed into neat, styled natural brown waves, and dare we say, it suits her! The effect was very sexy viola teacher or PhD student at cocktail hour. It was definitely not your typical courtroom 'fit designed to extract sympathy from onlookers, but then again, she wasn't dressing for an apology.

Anna's defense, according to The Guardian, is that, though her actions might not have been ethical, Anna never meant to scam anybody and was "merely buying time, so she could launch a business and repay her debts." In his opening statement, her attorney Todd Spodek's essentially arguing that Anna's exploits were just business acumen ("Sorokin was exploiting a system that was "easily seduced by glamour and glitz" after she saw how the appearance of wealth opened doors, via The Guardian). Honestly... fair. "Anna had to fake it until she could make it," Spodek said, characterizing her strategies like convincing banks to give her massive loans, faking letters of credit from European banks, leaving hotels with huge unpaid bills, and putting tens of thousands of dollars of expenses on friends credit cards, promising to pay them back. Holy shit, this trial is going to be great TV (it soon will be — both Lena Dunham and Shonda Rhymes have Anna Delvey projects in the works).

Fake heiress #AnnaSorokin appears with a black dress at the start of her trial in a #Manhattan court room. What fol… https://t.co/MvkxbTit5f
— Herbert Bauernebel (@Herbert Bauernebel)1553720682.0

Her head-turning, chokered look is actually far trendier and more put together than she ever appeared in her socialite days (her favorite item was supposedly a Supreme hoody. As Garage has pointed out last year, her sloppiness seemed to assure people of her status rather than undermining it, because only the rich and powerful would be so careless. According to GQ, the courtroom outfit was the result of a professional celebrity stylist, who the outlet confirmed, is Anastasia Walker. Anna's team enlisted Walker following a public scramble last week to figure out what her trial style "angle" will be as the highly awaited trial ramps up.

When Anna appeared in court last week for jury selection, she showed up in her Riker's gear. Upon seeing her inmate attire, according to the New York Post, her lawyer freaked out and sent an assistant to pick up $200 worth of H&M business casual. In her fast fashion black brazer, capris and beige sweater, she looked like a fresh faced publicity intern. However, it seems that Anna and her lawyers have different ideas about how to help her case: Anna wanted the aid to pick her up some stilettos, but the Department of Correction wouldn't allow for them.

Related | What Do You Wear When You've Been Publicly Shamed?

Based on the choker, it seems like Anna has convinced her team to do things the Anna Delvey way... aka acting like a wealthy and famous person. Walker's past celebrity clients include Courtney Love, T-Pain and G-Eazy. GQ confirmed that Delvey's glasses from yesterday were Celine and her black dress was Miu Miu. We can expect to see Anna in more luxury glam: Spodek told the magazine that today's look will include a "Yves Saint Laurent blouse, and Victoria Beckham pants."

Anna is, of course, on trial for grand larceny and theft of services after convincing Manhattan's elite from 2013 to 2017 that she was a wealthy German heiress with 60 million in a fund back home. Before anyone began to suspect her, she succeeded in getting nearly $300,000 out of her socialite friends, plus banks and luxury hotels, funding her multi-year champagne and Balenciaga-fueled bender. She's been incarcerated at Rikers Island since last year and could face 15 years in prison if found guilty.

Well, our grifter queen is nothing if not consistent. The whole styling ordeal is very on brand with the mix of delusion and chutzpah that turned her into a pop cultural obsession in the first place. You know we'll be watching as her trial and courtroom fashion journey unfolds.