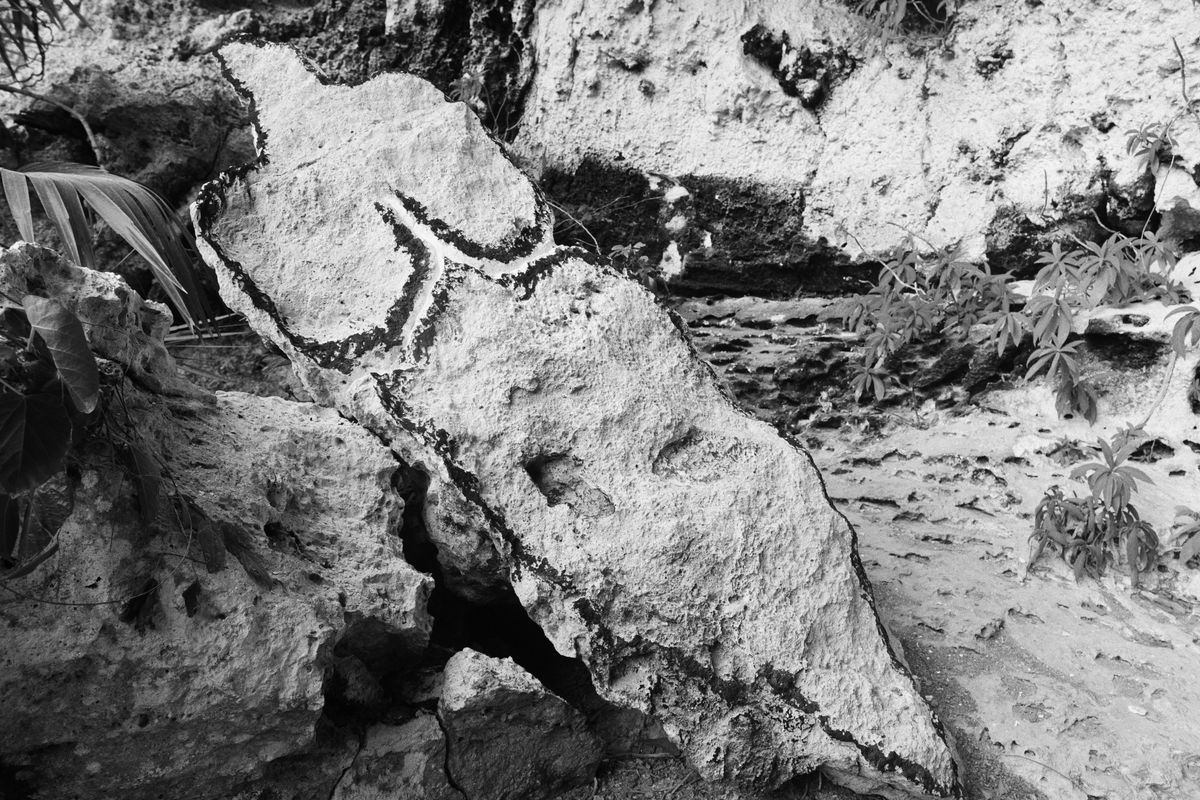 Following the completion of her most famous land art series Silueta in 1981, the artist Ana Mendieta traveled from the United States to her homeland of Cuba and began to create yet more body-like sculptures out of the earth. Photographs of these are now on view at Galerie Lelong in New York as part of the retrospective La tierra habla (The Earth Speaks). The show spotlights the final phase of Mendieta's fascinating career, which was cut short by her tragic death in 1985. Mendieta had not been back to Cuba since she and her sister were exiled as children; her return was a significant milestone, both personally and artistically.

The Rupestrian Sculptures showcased in La tierra habla (The Earth Speaks) were created entirely out of the physical environment, across three different sites in Cuba: Jaruco, Varadero, and Guanabo. They take shape out of limestone, sand, and dirt, evoking Indigeneous symbolism. Mendieta documented her creations with a medium-format camera, archiving them in pristine, dramatic, grayscale photographs. Today, art historians have made pilgrimages to the caves where she worked, finding the faded remnants of these ethereal carvings as they are subsumed back into nature.

Mendieta's earthly figures were not anonymous or unspecific — rather she named them after Taíno deities, like Maroya (Moon Goddess), formed with a dark outline against a white chalky stone backdrop. The figure Guanaroca (First Woman) is one of several works made in the caves of Jaruco, once home to Native Cubans and used as a hideout for rebels who fought for independence from Spain. Mendieta resisted being labelled as a "feminist artist" because white middle class women dominated the movement, and although earthly goddesses were popular tropes among 1970s feminists, they were often whitewashed or appropriated as trendy symbols. By contrast, Mendieta's inflections of Taíno symbolism reassert this erased culture's presence in Cuba. Her earth works restore intimacy between the body and the land, recognizing the specific ways that their separation has been part of a gendered and anti-Indigenous historical project.

Mendieta's silhouette imprints naturally make us wonder about the bodies which once lay there. Given she returned to America after making this series, the marks that she left behind at once evoke the turmoil of forced migration and her resistance against it. The Rupestrian Sculptures' tomb-like shapes and cadaverous poses also gain retroactive significance from Mendieta's sudden death in 1985, when she fell from a 34th floor window in Greenwich Village during a domestic dispute with her husband, the sculptor Carl Andre. The violence that we see in the sculptures is amplified, knowing that the artist who made them died so horribly.

Following her death, protestors gathered at exhibitions of her former husband's work with banners reading "WHERE IS ANA MENDIETA?" In her book of the same name, art historian Jane Blocker writes that "by asking where she is, the demonstrators are really asking where she is not" — that is, alive, being widely exhibited or taught, or included in the canon. But although her absence is a gaping wound, Ana Mendieta's work from more than three decades ago still feels more relevant and powerful than a good deal of contemporary art today.