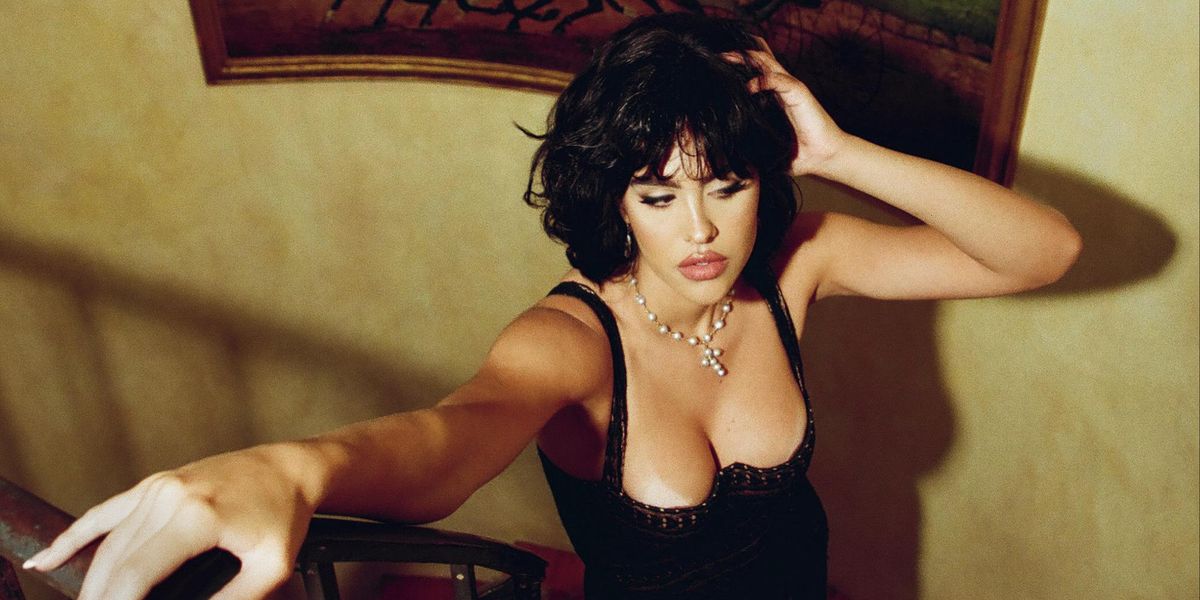 When shopping for Mother's Day, what do you get the woman who has everything?

If you're model Amelia Gray Hamlin and your mother is actress/Real Housewives of Beverly Hills' Lisa Rinna, you get her an original photo shoot dressed in her likeness, complete with the original designer gowns we all first saw in Us Magazine.

Amelia and her photographer friend Amaury Nessaibia came up with the idea to shoot the 19 year-old in some of Rinna's most iconic fashion looks, including her Vera Wang wedding dress. Mom was thrilled with the results — and so are we.

How did this all come about?

My photographer friend and I were thinking, What should we do? My mom has had so many iconic eras and phases. I feel like she's in one now. When you think of my mom, you think of the crazy dances and the lips, but I wanted to go more old Lisa Rinna/ vintage high-fashion.

My mom has so many dresses in her garage saved up from over the years. She had shown them to me a few months ago and that stirred up the idea. I got rid of all of my thoughts towards what other people would think of me recreating my mom and thought, What would my mom love the most? What would get her sentimental?

So I went through her dresses and picked out the ones that I really thought she would remember wearing most, one of them being her wedding dress, which was like the weirdest thing ever to put on.

It fit you like a glove, it looks amazing.

Amelia: When I went to put it on I was like, "There's no way I'm going to get this on." And it fit perfectly, so it was definitely meant to be. I was going through [my mom's] closet and I picked out a few dresses that really rang true to me. Then I just googled, "Lisa Rinna '90s red carpet."

My mom had all these red carpet photos, but she didn't have any photos getting ready. So we wanted it to be like a story series of my mom before she went out of the house on those nights or on her wedding day — glam photos around her home that nowadays we take to post on social media. I just wanted to have a different take.

It's brilliant. And Lisa, what did you think when you opened the present?

Lisa Rinna: I was just blown away. It's so funny because they shot it here on a Sunday. And, of course, I was home at the time. I literally locked myself in the movie room for five hours. I had to have somebody come bring me water and some lip gloss because they wouldn't let me out.

Amelia: First of all, let me just say, PAPER Magazine has always been a huge dream of mine. It's at the top of my dream list. It's one of the reasons why I started to want to model. So when my friend and I were going back and forth creatively, I was like, "Let's get this in PAPER."

I was going to make the photos into a book for my mom if we couldn't get them published. Since I didn't have time to do all of that before Mother's Day, I gave them to her unpublished. And then she loved them so much. It was just such a heartwarming moment. I don't think I'll ever be able to top that with my next Mother's Day gifts. This is probably the last one you're going to get.

Lisa: No expectations! I have none anymore. That's it.

So, Amelia, what does it take to recreate the perfect Lisa Rinna '90s look in a photo?

Amelia: I feel like people don't really realize it, but my mom and I are spitting images of each other. We look like twins, but different. All I was thinking about was, I need to get my ass to a wig shop. The budget I spent on this was probably $200. I bought one Lisa Rinna-looking wig and then I got one long black wig and cut it and curled it. They were all synthetic, so it was hard but I made it work. I messed and played with it until I finally resembled the absolute perfect look of her in the Alaïa dress. I don't even know how it came together, but it did. All I did for the shoot was buy two wigs and then I went into her bathroom and stole some jewelry.

And, of course, some Rinna Beauty on your lips!

Amelia: You're so right.

​So there is the wedding dress and the Alaïa. What are the other looks?

Lisa: It's Herve Leger, Alaïa, Gucci, Vera Wang. The Alaïa is the first designer dress that I was given. Harry [Hamlin] bought it for me. If you remember, there was a store called Madeleine Gallay in LA on Sunset and it was the coolest designer store. Of course, I could never afford it, but I'd go in there and look at things. And when I met Harry, we went in there one day and I tried the dress on. You know, it really is one of the iconic Alaïa dresses from the '90s. And he bought it for me. I think I wear it every 10, 20 years. It's one of those dresses I've worn out on the red carpet I think two or maybe even three times now, which, of course, is taboo and you never do that. But you can do that with Alaïa.

Amelia: You honestly shouldn't have worn it again and you should have just captured that moment, the iconic moment.

Lisa: I think it's kind of cool that it goes in decades.

I agree. I think it's amazing because it's really timeless.

Lisa: I think there's maybe five of those dresses out there in the world. So there's that one. And the red one was an Herve Leger, like original Herve Leger before we lost Herve Leger. That's a real one and I don't remember where I got it. I just got really into Herve because Harry had bought me a really cool Herve in the early '90s. So I began to love Herve and I must have bought myself that one.

Amelia: Oh my God. It's so beautiful, that red one. I'm going to have to wear it. It's actually in the trunk of my car, right now. I stole it. You don't know that.

Lisa: You better be careful. Someone could steal it out of your car! I'm going to move on to the Tom Ford Gucci.

That's a classic, too. That one is like a real moment, a Tom Ford moment.

Lisa: The one with the belt.

The belt is insane.

Lisa: It's insane. And you know what? Not only did I get that black one, but I have a white one, too.

Lisa: That dress is so sick and it looks so sick on Amelia. That collection is one of the sickest collections ever made. When it came out, I couldn't afford anything, nothing. And so I got this dress at Decades, probably only 10 years ago. I snapped it right up because I could afford it at the time. And then the Vera Wang wedding dress. The great story about that is Tory Burch was working with Vera at the time. I reached out because I wanted Vera to do my [wedding] dress. I worked with Tory and Vera sent me 20 drawings.

Lisa: Vera sent all those sketches back in the day and a sample of a dress. I went through all the pictures and I ended up wearing the sample dress that she sent. But we have all the pictures lined up in this hallway framed of all the dresses, because they're all Vera's drawings; they're beautiful, they're insane. I mean, it's such a moment. And, you know, we love Vera. Recently, Amelia, Delilah and I sat front row at Vera's show and they got to meet her. It was a full circle moment. Next, you'll have to walk in Vera's show. I would love that.

Amelia: I would love that, too. I'm not talking about a wedding any time soon, but you've inspired me. Ever since I was a little girl and walking down that hallway with the Vera sketches, I knew that I'm going to get a dress from Vera or I'm going to wear your dress. That was my dream: to either get a new Vera or to wear yours. Putting it on was the most it was the most surreal feeling. And by the way, I put it on in your bathroom and had a moment to myself. I literally almost started to tear up because I was also wearing your veil.

This is everything that created me and why I'm here right now. But here I am also in fashion, trying to achieve a spread in my mom's wedding dress, which is kind of what inspired me. I do think that growing up with all of those sketches and all of your fashion got me to my love of fashion and modeling and to where I am in my career. So that was just a very surreal moment for me because it was the start of everything.

Amelia: Who gets to wear their mom's wedding dress? Like, that's crazy.

Lisa: And now that you've worn it, you can, if you want, pick one of those pictures on the wall or have Vera create a new one. The possibilities are endless. It's so great, isn't it? It's so surreal. I don't think it's completely hit me. She just gave me the pictures on Mother's day and yet I keep looking at them. When your daughter's 19 and is recreating your looks, I try to think what my mom would feel like if I wore her looks and recreated her looks. And I think it can take a minute to process it. It's like, Holy shit, how fabulous is this?

I only wish you had done a Billie from Days of Our Lives look!

Lisa: That can be another time when you do Billie and Taylor McBride from Melrose Place.