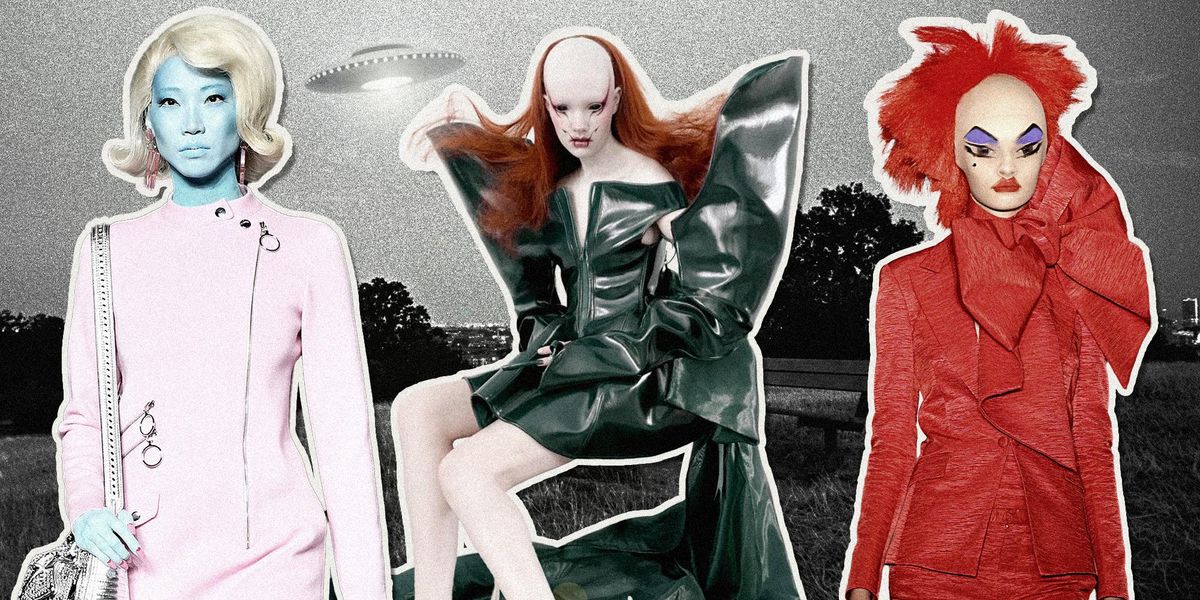 From indie designers to luxury megabrands, the fashion community has long looked to our intergalactic neighbors for inspiration. But while space age influences have been infiltrating the fashion landscape since the '60s, it's only in the past decade or so that alien tropes have invaded every corner of the industry, from the runways to major ad campaigns.

The extraterrestrial references aren't just limited to what we see during Fashion Week. For Hannah Rose Dalton and Steven Raj Bhaskaran, the Canadian duo behind Fecal Matter, their otherwordly alien visuals are fully embedded into their lifestyle. "It's always been our dream to infiltrate not just the fashion industry but society," they previously told PAPER, "and change the way people perceive themselves by presenting alternative versions of what's beautiful."

And Sasha Velour, the Season 9 winner of RuPaul's Drag Race known for her bald head and show-stopping looks, is one of the few queens who epitomize extraterrestrial glamour to a tee. (Who could forget her "Alien Eve" coronation look — a freakishly stunning bodysuit complete with crystals, stones and a wrapping snake.) Indeed, elevated alien motifs are a recurring theme in drag culture, making for some of the most impactful high-fashion images of our time.

On a larger scale, designers as established as Rick Owens, Jeremy Scott and Alessandro Michele have all experimented with sci-fi elements in their collections. The great Thierry Mugler even named one of his perfumes "Alien," which became one of the best-selling prestige fragrances of all time. And visionaries like Gareth Pugh and Alexander McQueen were among the first to give these space creatures a platform before it became trendy.

It was also around this time that alien beauty as a concept really started to gain steam on Instagram. "We first highlighted the emergence of dark, gothic, alien-like beauty back in 2016," Emma Grace Bailey, beauty editor at trend forecasting company WGSM told i-D. "A bubble of make-up artists that found creativity in the macabre and the dark started gaining attention on social media, drawing in fans who reveled in their rejection of classic beauty norms."

For out latest PAPER cover shoot, Demi Lovato was shot through an extraterrestrial lens, a cheeky nod to her time communing with aliens at Joshua Tree. In honor of her space creature photoshoot, we've rounded up some of the greatest alien fashion moments in recent history. Read on, below, for some of the highlights.

Alessandro Michele was thinking of vintage sci-fi TV programs, in particular Star Trek, when he dreamt up his Fall 2017 campaign for Gucci. Shot by Glen Luchford, the retro-futuristic images featured everything from UFOs to cows to alien-humanoid models. The audition clips posted on the brand's Instagram account featured models dressed in full alien garb while standing in front of a green screen reading lines for corny sci-fi scripts.

The models in Rick Owens' infamous Fall 2019 show resembled glamorous aliens complete with body modification like disfigured face protrusions and blacked-out contact lenses. He partnered with Instagram artist Salvia for the haunting makeup, which included extremely pale skin and scalps that receded all the way back to the crown of the head.

In 2016, Montreal-based couple Hannah Rose Dalton and Steven Raj Bhaskaran gave birth to @matieresfecales, AKA Fecal Matter, on Instagram. The duo's otherwordly freakish looks quickly amassed a cult following and they've since turned their head-turning alien visuals into a full business with partnerships including resale platform Depop. Their human flesh heels, demonic makeup and avant-garde aesthetic all contribute to an idea of life forms that exist in the outer reaches of the galaxy.

For Fall 2018, Moschino Creative Director Jeremy Scott sent models down the runway in various '60s-inspired looks and Jackie Kennedy bobs, with some covered in full green and blue body makeup that gave off an alien-like appearance. The intention was confirmed later on when the brand unveiled its "Alien Nation" campaign with models Gigi Hadid and Kaia Gerber, who starred as space aliens. According to Scott, the campaign's concept was to bring attention to the US administration's harsh stance toward "illegal aliens."

When reigning queen Sasha Velour returned to the crown the next winner of RuPaul's Drag Race for the Season 10 finale, it was her alien-inspired ensemble that unintentionally stole the show. "I wanted to embody the fantasy of a more-than-human alien goddess, kind of queer Fantasia for a new world of imaginative queer performers that go beyond humanity," she told People at the time. "So we came up with an alien idea, and then gave it an Eve, or maybe even Lilith, twist of someone who has experienced, and taken knowledge and really transformed it into self empowerment."

Gareth Pugh's second runway show after a 7-year-long hiatus was deemed by many critics as his best collection up to then. The leggy alien creatures wore clown-like bank robber masks by Val Garland and brightly colored wigs by Malcolm Edwards. Push described the looks, which were a nod to London's SoHo neighborhood, as "a little bit Lindsay Kemp, a little bit Divine, a little bit Leigh Bowery and a little bit sick and twisted."

While Alexander McQueen's iconic "Plato's Atlantis" collection was inspired underwater themes and reptilian motifs, you couldn't escape the alien-like details thanks to space-y/sea creature prosthetics and freaky eye makeup. The digital prints veered between something that resembled animal and alien, and the extreme hairdos conjured space martians that descended upon planet earth for one fabulous fashion experience.