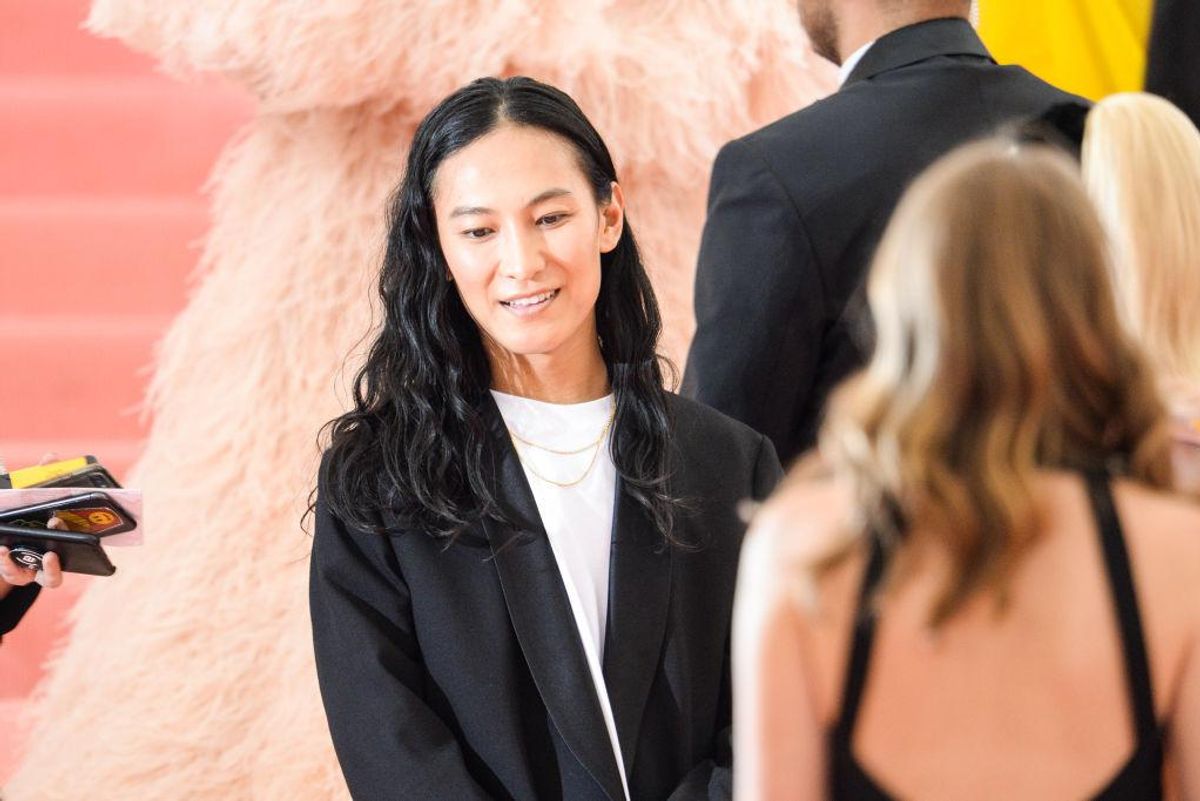 "Why aren't more fashion news outlets reporting about Alexander Wang?" It's a question that's been asked quietly for years, but got way louder last week after the combined forces of Diet Prada and Shit Model Management picked up on TikTok videos posted by model Owen Mooney in which Mooney alleged that Wang had nonconsenually groped him at a New York City club in 2017.

"I was by myself at one point and this guy next to me obviously took advantage of the fact that no one could fucking move and he just started, like, touching me up and fully like, up my leg, in my crotch, like it made me freeze completely because I was in such shock," Mooney said in his brief statement addressing the allegation. "I looked to my left to see who it was and it was this really famous fashion designer. Like, I couldn't believe that he was doing that to me. It made me go into even more shock. It was really fucked up."

Related | How to Start a Fashion Label During a Pandemic

This broke the proverbial dam, with many inside the fashion world and NYC nightlife community offering similar stories, as well as even more serious allegations, including that they'd been drugged by the 37-year-old designer. "Alexander Wang is an alleged sexual predator, many male models and trans models have come out and spoken about the alleged sexual abuse that Alexander Wang has inflicted upon them," read a post by Shit Model Management. "It is important to show your support to these victims by unfollowing Alexander Wang and boycotting his clothing line."

Shit Model Management was then flooded with DMs from other accusers, as well as those with secondhand accounts of Wang's alleged past encounters. Old tweets from rapper and former Wang muse Azealia Banks began to resurface, in which Banks shared anonymous reports of Wang's sexual misconduct — and particularly his targeting of trans women — on her Instagram. Also resurfacing was a 2017 Twitter thread from model Nick Ward accusing Wang of nonconsensual groping. "As he was passing, he swung, squeezed me, and kept walking," Ward told Insider last week. "They were moving pretty quickly through, so by the time I realized what happened, I just announced to my friend, 'that guy just grabbed my dick' and they're all like, 'that was Alexander Wang.'"

And because this is a column versus a report, I must mention my own DMs, which have been flooded with allegations from friends, friends-of-friends and followers I do not know with their own stories about Wang's reported predatory behavior. ENTTech Media Group and PAPER have not independently verified such accounts.

On December 31, three days after Diet Prada and Shit Model Management's posts, Wang finally issued a response. "Over the last few days, I have been on the receiving end of baseless and grotesquely false accusations," the designer wrote in a statement sent to The New York Times. "These claims have been wrongfully amplified by social media accounts infamous for posting defamatory material from undisclosed and/or anonymous sources with zero evidence or any fact-checking whatsoever."

On January 1, Gia Garison, a trans model and actor, alleged details of her own Wang encounter from February 2017. "He tried to pull my panties down and expose my genitals in the VIP area... It was just another night and then I remember being introduced to Alexander Wang and then chatting to him. I just remember dancing around and he was chilling with his posse and then reached for my bikini bottoms I was wearing and tried to tug them downwards. I said: 'What are you doing, what the fuck,' and stepped away. I didn't make much of it in the moment because I was just in club mode and tried to let things brush off my shoulder and not ruin my night... I've done many shoots where they've wanted to put me in his clothing since and I've just said no." Wang's lawyer said he "has never grabbed any woman" in the manner alleged.

On January 2, Business of Fashion's Lauren Sherman published a report in which she spoke to five men about similar encounters to Mooney's. At time of writing, the story has been picked up by, in addition to the New York Times, The Business of Fashion, Harper's Bazaar, InStyle, People, HYPEBEAST, Dazed, The Guardian, Fashionista, PAPER and more. Noticeably absent from that list were a number of the industry's biggest glossies. "Why are [Elle] and [Vogue] not reporting on the Alexander Wang news?" tweeted former InStyle Editor In Chief Ariel Foxman. "You are the world's leading fashion news outlets. This is fashion news." On Monday night, Vogue finally published a story.

So that's where we're at. But what's next? On Sunday, Shit Model Management posted to their IG story stating that Lisa Bloom, the attorney that advised Harvey Weinstein through his sexual assault and rape allegations and represented the women whose sexual harassment claims helped get Bill O'Reilly ousted from Fox, had "reached out" and is "going to represent the victims." The post encouraged followers to come forward with their story if they are willing to speak. "Dear Alexander Wang accusers, Google my name + Lisa Bloom to learn hard truth," wrote Rose McGowan on Twitter. "Learn who is repping you. Nooooo."

It's clear that hurdles remain, even if victims come forward in droves. Already, one alleged victim I spoke to anonymously asked his story to be removed from Shit Model Management and Forbes after hearing that Wang is "lawyering up" and trying to "take down" the victims.

On Monday morning, in a statement seen by Page Six, Wang wrote an internal email to his staff that reads: "Firstly, I'd like to take the opportunity to connect directly with the people who have helped me grow this brand into what it is today and address the recent false, fabricated and mostly anonymous accusations against me. While I have always been active in my social life, frequently attending various industry gatherings, parties and concerts where drugs and alcohol were present… but contrary to what has been said, I have never taken advantage of others in a sexual manner or forced anything on anyone without consent. I also have never abused my status or fame for my own benefit. These baseless allegations were started on social media by sites which repeatedly disregarded the value and importance of evidence or fact checking. It's my priority to prove these accusations are untrue and are fueled by solely opportunistic motives."

On Monday afternoon, Wang responded on his personal Instagram account. "I'd like to take the opportunity to connect directly with the people who have followed and supported this brand and me over the years and address the recent false, fabricated and mostly anonymous accusations against me," he wrote. "These baseless accusations were started on social media by sites which repeatedly disregarded the value and importance of evidence or fact checking. My team is doing everything in its power to investigate these claims and I promise to remain honest and transparent throughout that process. I am fortunate to have received an overwhelming amount of support over the last few days and am thankful to those standing by my side at this time." Comments were turned off.

Now comes a possible legal battle with no certain outcomes. "In general, sexual assault allegations are really hard to turn into a civil suit — or criminal charges for that matter — because of the absolutely horrific job we as a society do collecting and managing physical evidence," says Jenny Odegard, Of-Counsel at Samendinger Law. "So most legal actions come down to either videos, photos, or audio recordings (which is extremely rare), witnesses, and/or friends who remember hearing about it at the time. Even with some of those things, a victim has to have a lot working in their favor to have enough to be 'believed' by the legal system in any way that would result in culpability."

As Odegard says, Wang is in the position of power here, in having both financial resources and access to institutions that confer power. She cites Bryan Singer and Kevin Spacey's allegations and the lack of fallout as good examples of the type of battle Wang's victims face in seeking justice. According to her, there are two main paths that victims in this instance might take if they do not have the type of evidence mentioned above. One is to settle privately, the other is public shaming.

"Public shaming can motivate a settlement, but it is very risky because the accused pretty much always responds by threatening a defamation/libel suit," she says. "Which can be really scary to receive and would be potentially financially ruinous. Even having to engage in the back-and-forth on that sort of thing can be too expensive for most victims and too time consuming for pro-bono attorneys. Either way, a victim has to have some solid receipts to get anywhere at all. In the accusations against Wang, where he's [allegedly] using drugs and alcohol to incapacitate victims, even a reliable memory of the events can be hard to conjure. So, an awful uphill battle is the general summary."

While some of his alleged victims are asking for the bare minimum — acknowledgement, apology — that's definitely not happening anytime soon. What remains clear at this point is that Wang is taking no culpability within the accusations and intends to fight them in the effort to exonerate his name — and by extension, his brand.

But those calling him out have no plans to stop. "I have no sympathy for abusers," the Shit Model Management admin tells PAPER. "I think that Alexander Wang deserves to be de-platformed. He wants all of this to blow over, but I'm not letting up until I see actual change. If he gets away with this, it will make abusers feel safe and feel like they can continue to get away with it too. Just because Alexander Wang is famous doesn't mean that he is untouchable. He needs to be held accountable as much as every other abuser in the industry. I think that everyone should be boycotting his brand. I think that magazines should stop working with him. I don't think that he should be allowed to show during fashion week. There has to be some sort of accountability. Celebrities need to speak up and stop supporting him, as well. All of the celebs that were just wishing him happy birthday are silent right now. Where is the support for the survivors? I believe that Alexander Wang is a danger to the fashion community and these claims should be taken seriously."