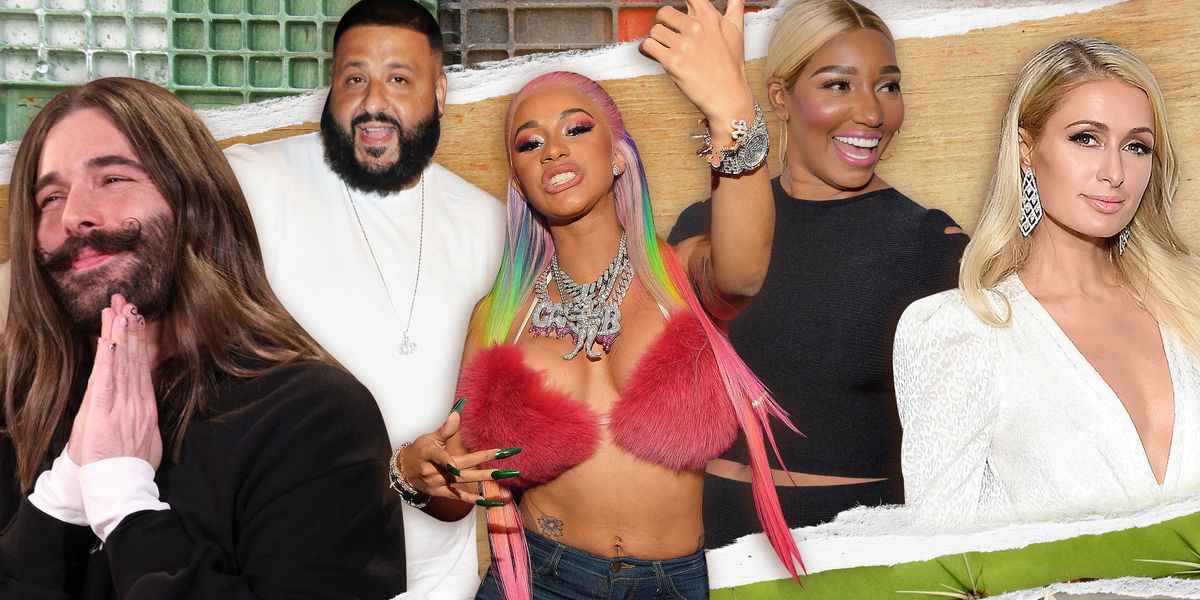 When Cardi B trademarked the "Okurrr" that's helped make her a household name, she joined the ranks of numerous celebrities who've patented their most well-known sayings: Paris Hilton and "That's hot," Rachel Zoe and "bananas," Taylor Swift and her objectively awful 1989 lyric "this sick beat."

And why wouldn't Cardi et al try and make money from their catchphrases? Thanks to social media and reality TV, the public is more aware than ever of exactly how celebrities talk — and we've begun integrating their speech patterns into our own on a mass scale. Most of your sentences at this point are just a mishmash of Kardashian, Hilton, and RuPaul. Maybe with some Real Housewife thrown in.

Below, every iconic phrase you probably forgot was originally popularized by famouses.

Oprah invented Aha! moments in the 1990s, and we've been discovering deep truths about ourselves ever since. The term has since been added to the dictionary, with Winfrey filming a video for Merriam-Webster explaining how she came up with it.

DJ Khaled has built a musical career on catchphrases, and "another one" just might be his best known. Simple, effective, and extremely 2015.

Heidi Klum didn't invent German. Or... did she? Either way, her trademark goodbye to failed Project Runway contestants is one of reality television's greatest and chicest elimination tropes.

Britney Spears — truly there is no other pop star, and in 2007 she let us know it. A rare moment of triumph amidst the darkest period of her career, it's as quotable as any of the lyrics from her bigger hits.

The Kardashians swearing on the bible is about as close to a true spiritual experience as you can get in this cruel, godless age.

Ice Cube can be credited with initially popularizing "Bye Felicia" in the 1990s, but its more recent comeback can definitely be attributed to RuPaul's Drag Race. Then Michelle Obama used it to bid adieu to the White House, cementing its high meme status.

Where were you when Kim Kardashian admitted to cropping her own child out of a photo?

Thank you, JVN. For this, and everything else.

Before she was Bhad Bhabie, she was the cash me ousside girl. It's the catchphrase that launched a surprisingly promising career!

Don't fuck it up

Another RuPaul line that will live forever, and a great motivational tool for all kinds of everyday situations.

A rare but notable example of someone successfully turning their own name into a catchphrase.

Ariana Grande's catchphrase? It's emojis. She's a big fan of hearts right now, but lightning bolts and clouds are also in regular use.

"On fleek" has Nicki Minaj connotations, but the phrase was first popularized by Vine user Peaches Monroee, aka Kayla Newman. We thank her for her service.

The guido guide to life, courtesy of Jersey Shore's The Situation.

Another important acronym, popularized by Ms. Tiffany Pollard. Head Bitch In Charge, if you're new here.

I don't know her

Mariah Carey still, to this day, does not know her.

Defining 2000s celebrity stylist Rachel Zoe has trademarked both "I die" and "bananas," because she knows her worth.

Jock (Get off my)

Try and use Bethenny Frankel's immortal line in a sentence today.

Kris Jenner's supportive but manipulative momagement style summed up in one quotable sentence.

On average, Beyoncé provides us with about 10 empowering catchphrases per album. This is maybe the best one.

Project Runway's Tim Gunn: a man I wish was here to coax me through every deadline.

N is for Nene Leaks from The Real Housewives of Atlanta, who is a walking catchphrase. Her most famous quip is probably "bloop," but it's also fun when she calls people "wig."

One hundred people in the room

Lady Gaga's A Star Is Born press tour catchphrase that became a meme. Madonna claimed she came up with it first, but the two have since squashed their beef.

A catchphrase popularized by Gaga stans as well as Abbi and Ilana, like many catchphrases on this list "Yas Queen" has roots in ballroom and drag queen culture. The widespread popularity of shows like RuPaul's Drag Race has helped once-niche slang phrases cross over, and now celebrities are all over it.

"Okurrr," which Cardi once likened to the call of a shivering New York City pigeon in winter, will soon become her registered trademark.

Tyra Banks on America's Next Top Model taught me as much, if not more, than my most inspirational college professors.

Paris Hilton's catchphrase is all time. She's even trademarked it.

One really can't underestimate RuPaul's impact on the culture.

With "Thank U, Next" Ariana Grande invented break ups, and also made text message abbreviations in songs cool again.

Who gon' check me boo?

It's, what, the fourth time DJ Khaled has appeared on this list?

Excluded from this narrative

One that Taylor Swift never asked to be a part of! Except she kind of did!

Drake is responsible for the fact YOLO was inescapable in 2012. We were so innocent then, back before the mass nihilism took hold.

Was it a stretch to file this under 'Z'? Yes. Was there a weird two-to-five-year period during which we all thought it was okay to say the word "amazeballs" on the internet? Also yes. We have Perez Hilton to thank.