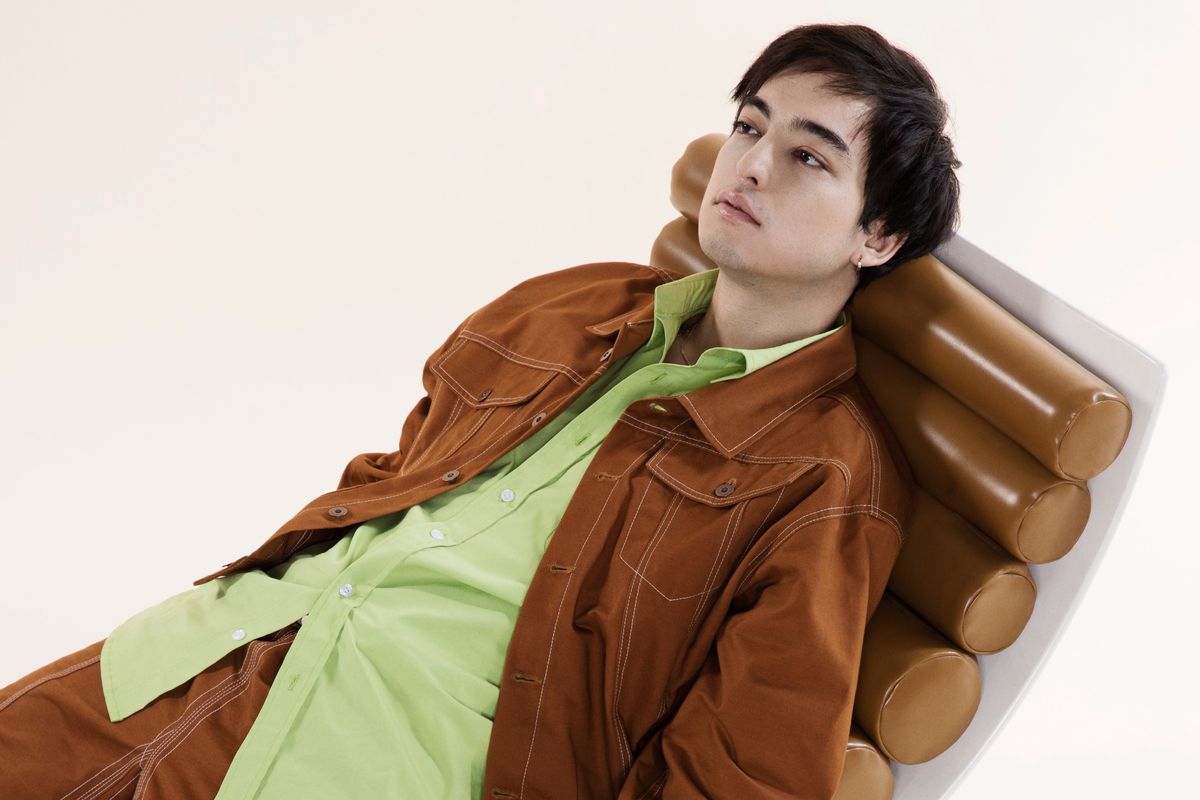 How 88Rising Raised the Bar for Asian Representation

Before 2018's Crazy Rich Asians starred Hollywood's first all-Asian cast in 25 years, before Korean boyband BTS became the first K-pop group to present at the Grammy's, and before Sandra Oh and Aziz Ansari made history as the "first Asians" to win their respective categories at the Golden Globes — there was 88Rising.

Though not nearly as talked about beyond the narrow, but growing intersection of hip-hop and Asian cultures, the New York-based media company and record label, which promotes and manages Asian artists, racked up a few firsts of their own last year. 88Rising singer Joji (you may have known him as the former YouTube sensation Filthy Frank) became the first Asia-born artist to top the Billboard R&B/Hip-Hop chart for his album Ballads 1; meanwhile, Indonesian rapper Rich Brian became the first Asian artist to land a #1 Hip-Hop album on iTunes with his debut Amen. That's not to mention the company's inaugural Head In The Clouds Music & Arts Festival, the first Asian-centric music festival to launch in America.

As tedious as it might seem to keep track of such small milestones, fans of Asian actors, artists, and creatives haven't had much to celebrate as a community until recent times. But it's not that the talent wasn't out there, says 88Rising founder and CEO Sean Miyashiro — there just wasn't much of a platform for it.

"A few years ago, I had dinner with a group of friends," Miyashiro tells PAPER. "I looked around the table and everyone was a dope Asian motherfucker — the best Asian designer, a next-level Asian chef, a rapper. There were all these fucking incredible Asian creatives killing it in their own fields, and I realized we didn't have a home to tell our stories. Something sparked and it just felt like the right time to build something."

A Korean- and Japanese-American from California, Miyashiro was already an industry veteran by the time he planted the seeds for 88Rising (written as "88⬆") back in 2015. Two years earlier, while working at Vice, he had spearheaded the launch of the site's now-defunct, then-massively successful electronic music channel Thump. It was here that Miyashiro cut his platform-building chops, honing in on accessible, digitally-savvy content that could engage readers all along the dance-music spectrum, from insider to mainstream. But while he was introducing the world to underground dance music back then, his focus now is the untapped world of Asian and Asian-American musical talent.

"Our whole goal and mission is to represent the Asian minority and fight under-representation or misrepresentation." – Niki

"The whole mindset with 88 is that we recognize that there is an existing gap between minorities and mainstream media," explains 20-year-old Indonesian songstress Niki (off-stage name: Nicole Zefanya). "Past efforts to bridge the two have been plagued with lots of sacrifice and misunderstanding. Our whole goal and mission is to represent the Asian minority and fight under-representation or misrepresentation."

The Jakarta-born, Los Angeles-based singer is noticeably the only female on 88Rising's current roster, bringing with her a sultry neo-R&B sound to a hip-hop and rap-dominated lineup. Since signing with the label last year, she's racked up 113 million streaming plays globally on her debut EP Zephyr; earlier this month, she dropped a second EP, wanna take this downtown?, collaborating with the likes of Z3N, a twice-over platinum producer who's worked with Lil' Wayne and Tory Lanez.

Despite her rapid rise to success, Niki says representing Asian artists, and specifically Asian female artists, has not been without its share of struggles — from public misconceptions to a sense of cultural disconnect.

"Too often where there is a minority on screen, pursuing a career in the arts, they are faced with outdated stereotypes and ideologies associated with being Eastern," Niki explains. "On the total opposite end of the spectrum, they are sometimes forced to abandon their roots and cultural identities to comply with Western-ness or even whiteness. 88 was born with that in mind, and thus now we are spearheading a movement to not only combat, but also transcend what it means to be Asian in mainstream media."

Under Miyashiro's leadership, 88Rising provides not only the cultural support, but also the strategic and technical know-how to help emerging Asian artists cross over in an efficient but meaningful way. Think snackable, shareable content piece like the "Rappers React" video series, overlaying genuine reactions from current chart-toppers like Migos, Lil Yachty, and Playboy Carti on top of music videos from 88Rising artists.

"I don't think I ever wanted to be Chinese more than this moment right now, " declares rapper KYLE, in total earnestness, while watching the video for Higher Brothers' "Made in China." "They bring their culture into it. That's what sticks — that's what makes it amazing," says Memphis up-and-comer Xavier Wulf.

For mainstream rap fans, these off-the-cuff comments signal endorsement and approval from hip-hop's reigning champs and rising stars. But for 88Rising's artists, the dynamic 4-minute videos deliver more street credibility than any traditional ad campaign could — cutting through the barriers of culture, language, and name recognition, and allowing potential converts to focus instead on the music and attitude.

For Higher Brothers, the massively popular, Chengdu, China-based rap quartet, this ability to reach new fans and listeners without speaking much English has been crucial to reaching their next level as global artists. Since coming on board with 88Rising back in 2016, the group (comprising members MaSiWei, DZknow, Psy.P, and Melo) has followed in the viral success of South Korean labelmate Keith Ape, whose single "It G Ma" was undoubtedly 88Rising's first runaway success story. These days, the Higher Brothers are selling out shows across North America and embarking on Asian, American, and worldwide tours — all while rapping almost entirely in Chinese and unabashedly repping their Chinese-ness. With 88Rising securing the platform and the audience, the Higher Brothers say they're able to let their music speak for itself.

"The biggest challenge for us is the language barrier," the group explains. "It's not as easy to communicate with the crowd in America, so we use our music to speak to the crowd. The advantage is that we put our all into our music and live performances."

In some ways, that singular emphasis on sound — regardless of ethnicity or nationality — is the goal of a true artist. While people and artists of color should be given the space to speak on their struggles and identities, truly equitable representation would look like Asian and Asian-American artists who could enjoy success in the mainstream with or without having to represent a marginalized community. But until that moment arrives, Miyashiro says he wants to help amplify the message of his artists, and empower them to leverage the 88Rising name.

"Be proud of who you are and rely on your strengths. Identity is very important but always remember who you are." – Joji

"For everyone who's in our crew and everyone who works for us — our identity goes without saying. It's nothing that we have to explicitly talk about all the time, but there's a higher purpose that's driving what we're doing day to day, even when it's tough or when we face challenges," he says. "We will always encourage and give our artists a platform to speak about their experiences and tell their stories, if they choose to do so. Everyone knows the responsibility that they have and what they represent, but it has to come naturally."

Naturally, each artist embraces that sense of responsibility differently. For Joji, who is half-Asian and grew up in Japan but now resides in New York City, a coherent Asian identity has not been as clear for him. While he is happy that his success can inspire young Asian-Americans out there, he also encourages individuality. "Be proud of who you are and rely on your strengths," Joji says. "Identity is very important but always remember who you are."

As for Niki, being both Asian and female has put her on a more intentional quest to reach Asian and Asian American women. "As the only Asian female on the label my personal mission is to change culture specifically for the female Asian youth — to empower them," she says. "I want them to never feel like they're obligated to adhere to any stereotypes society places on them for being Asian and female, yet I want them to simultaneously have conviction in celebrating their heritage. I hope my presence in music inspires them to be proud of who they are and where they're from."

It's clear that young Asians and Asian-Americans are responding to 88Rising — in droves. Miyashiro says his proudest moment, the moment in which he finally realized they were onto something, was last year at the first Head In The Clouds Festival: "Being on stage with all the artists for the finale and looking into the sea of people — I knew we were doing something important for culture."

And far from wanting to dominate the Asian-American music scene, Miyashiro welcomes the next generation who can continue building on the foundation and legacy 88Rising has created.

"The door is open for the next generation of creators who will push boundaries in all levels of pop culture and everything in between," Miyashiro says. "When more people are inspired to create, the more heroes will emerge. There's strength in numbers."

The second annual Head In The Clouds festival takes place on August 17th, 2019 at the LA State Historic Park. Visit 88rising.com for tickets and more information.