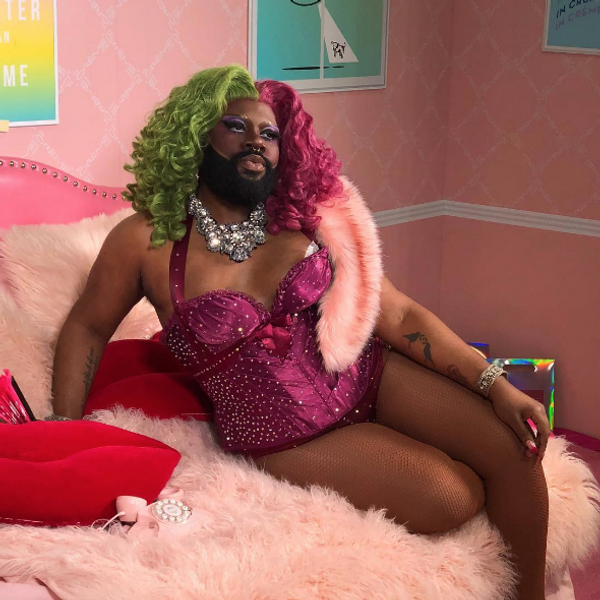 These 5 Performers Came Up Without 'Drag Race'

So maybe stop asking them to audition.

Diehard Drag Race fans know that a world of drag exists beyond the show, that drag culture goes back decades and that countless incredible performers are slaying stages around the world every night — yet so many regard snagging a spot on the show as the only route to stardom.

We're not knocking the show or denying its invaluable impact on drag culture or its mainstream popularity. But the thing is, there's different kinds of fame and success; it's a subjective ambition, and not every queen wants to join the Ru Girl ranks. Besides, RuPaul's limitations on contestants leaves some performers — trans queens, drag kings — feeling discriminated against or excluded altogether.

Let's stop assuming every drag performer wants that specific screen time, and instead celebrate them for what they've achieved already — not in spite of the show, but because they've explosively talented.

We've rounded up five of our favorites who've earned themselves fanbases on a level that's undeniably deserving of Drag Race acknowledgment, but who aren't standing idly, waiting for RuPaul's approval to legitimize their artistry. They're already legendary.

How many queens are out here selling sex toys? Lucy Stoole is one — maybe the only one? A line of insertables in a variety of sizes as well as cock rings are available on her website, which also links to her DragQueenMerch.com shop with clever branding, like Emoji versions of the Chicago queen's mug as a graphic print and the Reddit Bitch tee.

Performing in the city since 2012 after relocating from Nevada, the International Black Bearded Beauty has broken ground for Chicago's drag performers of color — she's deemed legendary and revered by her community as a mother hen. As a regular host at the popular local party Queen and a performer at heaps of other events (she also DJs, by the way), Lucy Stoole delivers a cheeky mix of filth and glamour on the regular. She's stated publicly that Drag Race is a goal, and really, Ru should be so lucky; Lucy Stoole is officially an icon in her own right.

Despite her win on season two of The Boulet Brothers' Dragula, reigning Drag Supermonster Biqtch Puddin was evidently asked about Drag Race enough times that she felt compelled to broach the subject on Facebook. In the video below, she compares her achievement to having joined the supervillains of the Legion of Doom, which she prefers to the do-gooders of the Justice League — then finishes off the clip with a bout of appropriately creepy, maniacal laughter.

The slim likelihood that drag kings will ever compete on Drag Race hasn't stopped stalwart drag king Landon Cider from sending in audition tapes — in part, the LA performer wrote on his season nine submission posted on YouTube, because "people change their minds," but also because the challenge has become a tool for their own creative growth. But with a 25K-plus following on Instagram and a steady flow of hosting gigs and shows alongside renowned kings, Ru Girls, Dragula winners, and The Boulet Brothers themselves, they've inarguably cultivated a solid fanbase all on their own.

His lip syncs are on point in his magnetic performances, but makeup artistry is definitely one of Cider's biggest strengths: Superb cosplays (Beetlejuice, Jesus, Einstein, Edgar Allen Poe, Trump, Buzz Lightyear), androgynous otherworldly ghouls, and hulky leather daddy looks are just part of his far-ranging repertoire. And while they've argued in favor of king representation on Drag Race (even penning an op-ed for The Advocate in response to Ru's no-kings-allowed commentary a few years back), there's no doubt Landon Cider's star will continue to soar, with or without Mama Ru's platform.

This L.A. alt-drag leader, a seasoned spook even before snatching the first Dragula crown, has earned a reputation for blending cinematic horror and high art both in performance and editorial shoots. Whether or not she'll audition for Drag Race is a FAQ "everybody and their damn grandmother" asks Supermonster Vander Von Odd, right up there with the origins of her name – and her response in a vlog shared last year was frighteningly succinct.

This NYC queen created DragQueenMerch.com for performers working outside Drag Race avenues, so it makes even less sense to ask BibleGirl — someone who's not only amassed a huge following without screen time alongside RuPaul, but is also elevating other entertainers like her — why she hasn't auditioned for the show. She even supports RPDR queens on the regular (and several sell through her shop, both online and in Hot Topic and other stores, too), and it's possible that she may have auditioned in the past, but the BibleGirl of today is self-proclaimed internet — not TV — reality trash. Nevertheless, people still pose the question, and her responses are perfectly shady, and loads of fans always follow with support:

BibleGirl hasn't been shy about her criticisms of Drag Race, either.

Further driving the point home, last March BibleGirl hinted at the possibility of creating her own show. (Which we would definitely watch. Please do it, BibleGirl).