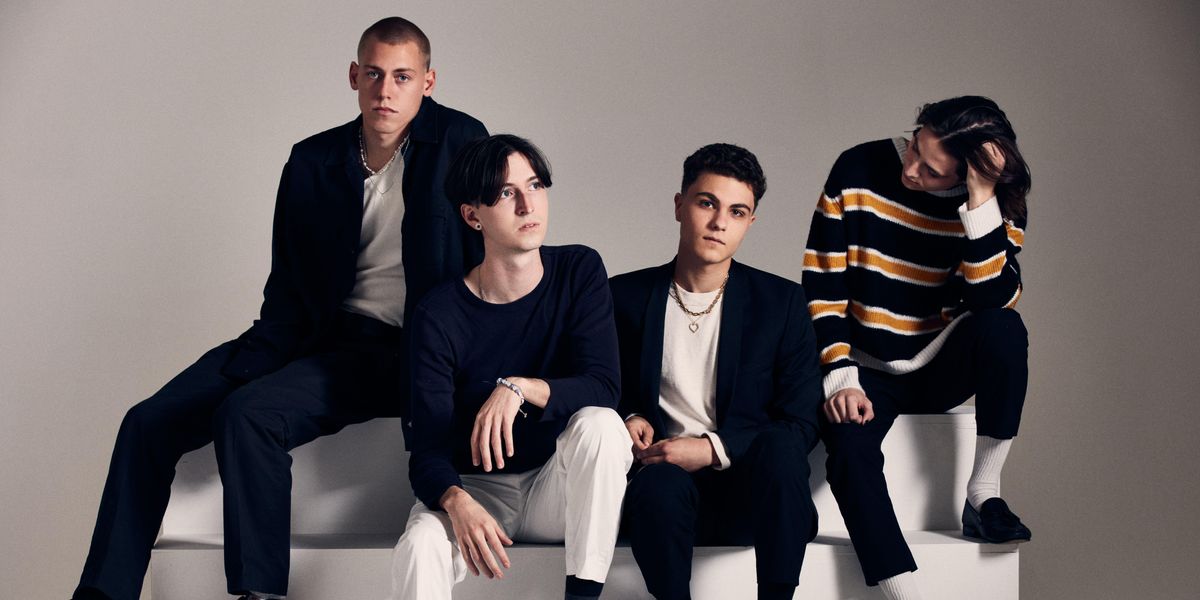 Noah Taylor originally went to Sydney to chase a girl, but instead of finding romance he found a band. When the executive producer crashed at a friend's place, he met Cameron Graves (vocals), Jackson Leitch (guitar) and Liam Wallis (drums), who'd all eventually become the now LA-based alt-pop outfit 19&YOU. And their self-titled debut EP, which documents this bittersweet coming-of-age story, is out today.

By tackling the confusion of breakups alongside the excitement of new beginnings, 19&YOU sits comfortably between honest introspection and shiny, synth-pop to capture the complexities of finding your way in life. "I thought livin' somewhere brand new/ Maybe I would get you/ Out of my head, out of my head," Graves sings on their Carlie Hanson-assisted highlight, "PART OF YOU" — an example of the balance they strike perfectly.

Below, PAPER asked 19&YOU to dive into every song off their EP, track by track. "We write from experience and relatability, the band says, "which is why we believe our fans will be able to really connect with the tracks on the EP."

"PART OF YOU" is a song that's very special to us. We all met each other and formed our band in Sydney, Australia. It never occurred to us that so quickly after we started making music, we'd enter a global pandemic and move across the world to Los Angeles. This song is about the adventures we had in Sydney and the move to a new city. It's about the places we used to go, like Bondi Beach, which we mention in verse one. It's also about the people we left behind and how we entered this new stage of life. It was a dream to have Carlie Hanson hop on the song! One of our co-writers, Mick Coogan, sent her the original track and we were stoked to hear she loved it. She cut her vocals, Noah edited them on his laptop and the result was amazing. Having her on added a whole new level of intensity and emotion that we fell in love with. We loved working with her!

Fun Fact: In the music video for the song. we flash a lot of iPhone videos and old cam-recorder film. Those are all videos we took in Sydney of us making music and living life. We all get teary-eyed when we watch that video and are taken back to where it all started. Our director Johnny, who does all of our videos, really brought it to life. We had to plan and shoot the whole video with three days notice, so it was a team effort to get it off the ground. We're really in love with how everything turned out and we think it's the perfect way to open the record.

One day Noah was scrolling through his laptop showing us old demos he had written. He played "ADRENALINE" and instantly Cam wanted to cut it. The original version didn't change much because everyone already loved the sound. The hardest part about this track was getting the tempo right. Cam had to record his vocals four times because we kept changing the speed! When we go back to listen to the old demo now, we're glad we ended up with a higher tempo track because the slow version didn't give us the same feeling as the final one. We're really in love with what a departure "ADRENALINE" is from the rest of the record. The song takes on a darker tone and it's got the most interesting guitar swells in the drop. It's the only song on the record that really punches you in the face with the intensity and that's why we love it so much.

"RUNNIN'" was the first song we wrote for 19&YOU. We started writing it within the first 15 minutes of us all being in a room together, unknowingly starting the chain of events that lead to 19&YOU. "RUNNIN'" is about being caught between two hard spots: being in an unhappy and unhealthy relationship or being unhappy experiencing the pain of a breakup. This song combines a bunch of elements from the music that we were listening to at the time we wrote it: trap drums, dreamy guitar plucks, 808s, heartfelt vocals and vocoder.

"RUNNIN'" also holds a lot of sentiment to us because it resembles a time of pure spontaneity and excitement. After we wrote "RUNNIN'," we made a point to write an EP while Noah was in town. There was a tangible excitement and a feeling that something special was starting with 19&YOU.

Noah had actually written this song to potentially give to another artist. While he was trying to find someone interested in it someone had suggested it be a 19&YOU song. He had already gone back to the US at this point and the rest of the band was still in Sydney, so he texted us the demo. Everyone loved it and Jack cut guitars that week. The whole song was done over zoom. We had our incredible friend, Matt Howerton, help us cut vocals since Noah couldn't be there in person to record. We tracked everything over zoom. This is the most pop-leaning song on the record and we're so excited for people to scream along to it live.

When we met Noah, he was only in Sydney for two weeks. "HEAD/HEART" was the last song we wrote with him during that time. Since we had all been through really intense break-ups right before Noah got there, we had a ton of emotions just waiting to be let out. This song was everyone's way of letting go and moving on. We love that it doesn't paint anyone in the wrong or place blame. It was super important to us to write a song that acknowledged how great our relationships were at one point, even if they didn't work out in the end. Break-ups aren't always easy and down-playing what you had only makes it worse. We wanted a super mature and introspective song that said, "Hey, I know it didn't work out, but I wish you the best and really do care for you."

When we started "BORED!" we didn't have any idea what we wanted the end product to sound like. The two things we were sure of were that we wanted a song driven by Jack's guitar and that it would be about our breakups, which all happened at the same time. Once we found the line that became the base of the song, the rest fell into place. The song was really just us having fun and jamming out with no expectations or set direction. There weren't any rules and as a result we created some of our favorite lyrical moments. A lot of the lyrics are hyperbolic and satiric, but those are the parts that make it dramatic and exciting for listeners. No matter how much we dramatize our writing, at the core we value honesty and telling real stories in our art. We're always trying to find engaging ways to tell our stories while still staying true to our experiences.

"19&YOU" was one of four songs we wrote while Noah was visiting Australia. We wrote this song about the transitional moments in one's life and reminiscing on those memories. Writing "19&YOU" really allowed us to grasp what we wanted our band to look like. It's nostalgic and heartfelt, which was what we were all feeling after going through break ups and heartbreak. The night we wrote that song we tested it in Jack's jeep and just drove along the coast. There was something really special about that night. We booked a studio the week before Noah left and threw down drums for the track, which really rounded out the song and gave it the dynamics it needed.