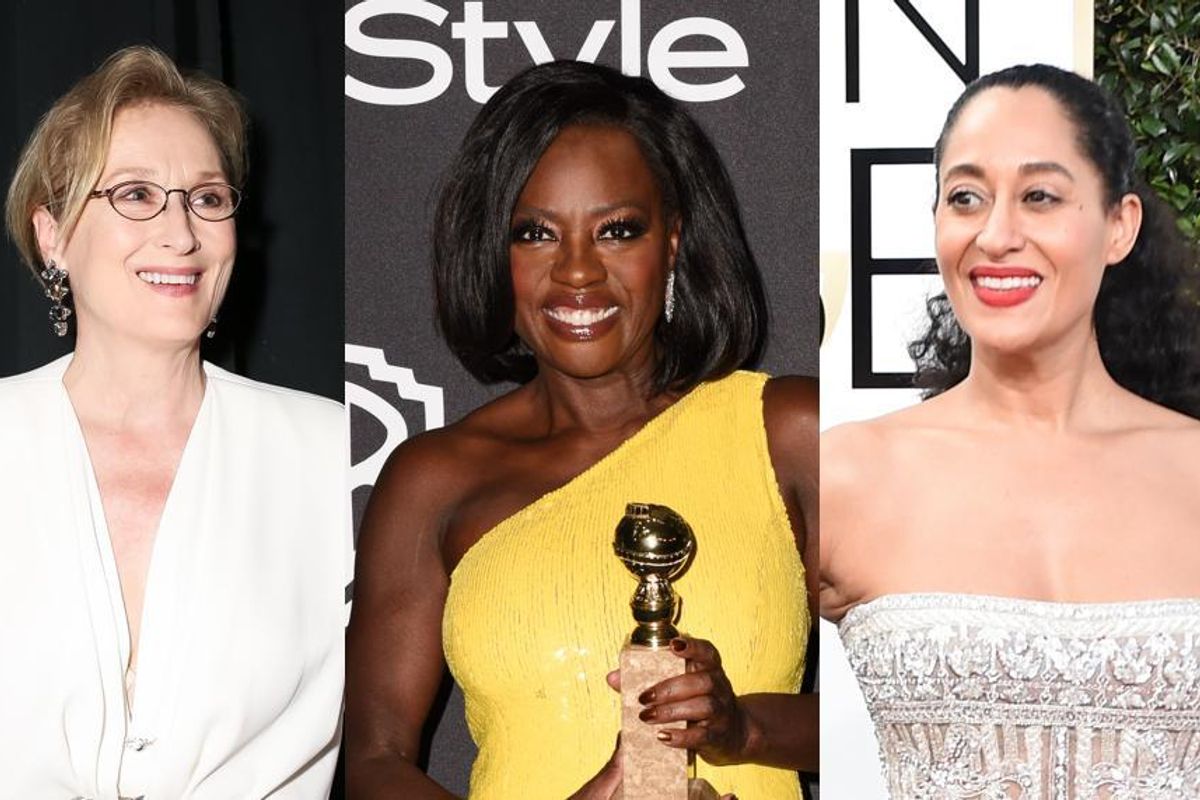 And, per usual, the men made it all about themselves.

Needless to say, there was a whole lot to tweet about during the the 74th Annual Golden Globe Awards last night. From the "Hidden Fences" flubs to the treatment of Nate Parker vs. Casey Affleck, there was no shortage of talking points -- though one thing did stand out amongst all the glitz and glamour. And that was the striking contrast between the way women and men honorees used their acceptance speeches. For women, that meant bringing visibility to big issues like bullying, representation and female friendship. And for the guys, they made it all about themselves (surprise!).

So lets begin with the positives. Starting out the night was Tracee Ellis Ross's amazing shout-out to "the women, women of color, and colorful people whose stories, ideas, thoughts are not always considered worthy and valid and important" in her acceptance for Best Actress in a Comedy.

"This is for all the women of color, and colorful people." — @TraceeEllisRoss 💁🏽💁🏾💁🏿 #GoldenGlobes pic.twitter.com/JqzMsqa2GE
— The FADER (@thefader) January 9, 2017

Ross's words were even more poignant as she was the first black woman to receive the honor in 33 years. It was a beautiful speech that recognized the important role Black-ish, a primetime family sitcom that addresses important issues like police brutality against unarmed black people, has played in diversifying primetime television.

Then came Viola Davis's moving speech for her Best Supporting Actress win as Rose Maxson in Fences, which brought light to the importance of telling the stories that aren't always told. Acknowledging that it's difficult to get Hollywood to make a film that's not a guaranteed box office hit, Davis thanked Denzel Washington and all the other people who helped finally bring August Wilson's Pulitzer Prize-winning play to the big screen. She then finished off the entire speech with a shoutout to her own father, "the original Troy" who only had a fifth-grade education and didn't know how to read until 15, but still had a story worthy of being told to the masses.

Davis continued to kill it with her introduction of friend and Doubt co-star Meryl Streep. Presenting her with this year's Cecil B. DeMille Award, Davis applauded her legendary skill, while admitting she was one of her biggest inspirations and made her "proud to be an artist." A beautiful proclamation of female admiration and friendship that brought Streep herself to tears, Davis also added that, "you make me feel that what I have in me — my body, my face, my age — is enough."

And then Streep took to the stage to deliver a powerful, anti-Trump speech commended by the Internet-at-large as the way to use your platform.

#MerylStreep just used her platform not gush about her lifetime achievements, but to try to make the world better. #GoldenGlobes
— Ryan Davis (@RyanDavisComedy) January 9, 2017

"Hollywood is crawling with outsiders and foreigners. If you kick 'em all out, you'll have nothing to watch but football and mixed martial arts, which are not the arts," she said, before digging into Trump and his rise to power this past year.

"This instinct to humiliate, when it's modeled by someone in the public platform, by someone powerful, it filters down into everybody's life," Streep continued, referring to Trump's horrific imitation of a disabled reporter on the campaign trail. "It kind of gives permission for other people to do the same thing."

"Disrespect invites disrespect. Violence incites violence," she wisely said. "When the powerful use their position to bully others, we all lose."

However, in stark contrast were the (white) men of the night, who, unsurprisingly, made it all about them. And the best part about it all? They placed it on the backs of other people.

Take Casey Affleck, who won the big-ticket Best Performance by an Actor in a Motion Picture, Drama award, but used his acceptance speech to allude to the sexual harassment allegations swirling around him.

Echoing a statement he gave the New York Times and a quote in Variety -- in which he implies that his family is the real victim in all of this -- Affleck ended his speech by thanking his children, saying they "give me permission to do this because they have got the strength of character to keep at bay all the noise that sometimes surrounds people who live publicly."

And while it is unfortunate that his kids have to be tangentially affected by this noise, to use his award speech to minimize what happened to the women who say they were verbally and physically harassed by him is low -- and to detract from their allegations using his children is even slimier.

And then there was Tom Hiddleston, whose acceptance speech for his role in The Night Manager was up there with the cringeworthiest flubs of the night.

Using his minute Hiddleston embarked upon one of the most self-congratulatory, white savior-y anecdotes one could think of, while completely glossing over one of the worst humanitarian crises in history. While he was working in Sudan with the United Nations Children's Fund, Hiddleston said he spoke with some workers from Doctors Without Borders who had binge-watched The Night Manager during a shelling. This was so moved by other people watching his work, he had to share it at the Golden Globes. He then tied it all together by making a brief nod at the illegal arms trade and "the idea that we could provide some relief and entertainment for people … who are fixing the world in the places where it is broken."

That was a long story Tom Hiddleston told to pay himself a compliment. #GoldenGlobes
— Gary Janetti (@GaryJanetti) January 9, 2017

Hiddleston should take notes from Davis and Streep re: how to give graceful acceptance speeches that touch on important issues #GoldenGlobes
— Liz Dawson (@LizAnnDawson) January 9, 2017

Biggest surprise though? Hiddleston was apparently shocked by the notion his speech could ever be interpreted "self-indulgent" afterward.

That said, a few men did get it right last night -- namely national treasure Donald Glover and Lakeith Stanfield, whose joyous celebration of Atlanta's win is truly the proper way to thank the Hollywood Foreign Press Association.