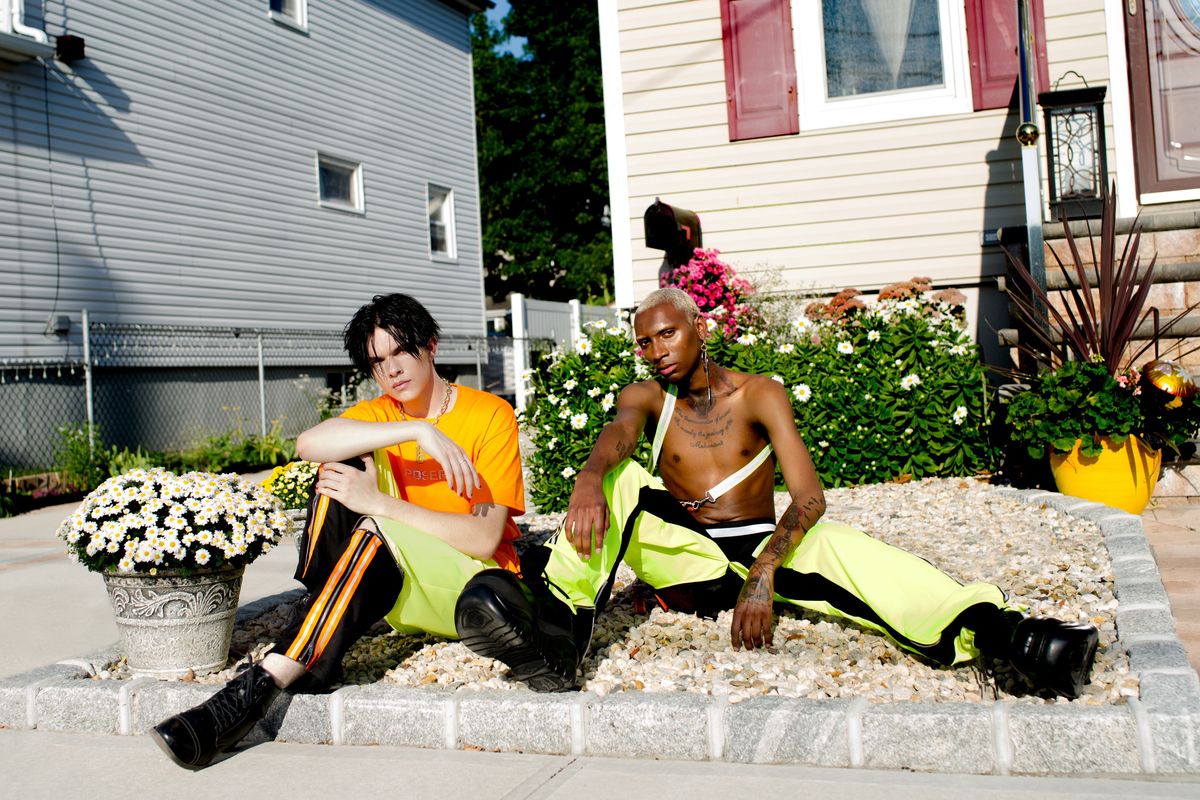 Brian Whatever understands the power of nuance, but he doesn't act on it with his nose in the air. The New York designer's burgeoning brand Whatever 21 dances the line between nostalgic and now, street and suburban, all viewed from a humorous—at times intently ironic—point of view.

He's been called an outsider, though his references are entirely relatable, for spring '18 pulling inspiration from early 2000s cultural icons like Paris Hilton and Christina Aguilera. The current collection twists this superficial glitz with a darker attitude that recalls teenage existentialism (Think My Super Sweet 16 meets Hot Topic).

Tees are decorated with phrases like "Poser" and "Everyone is Lying" in Swarovski crystals—a duality of that's been present in Whatever 21's DNA since it first launched in 2012. There's camouflage and bright neon, silks and denim, creating a bold contemporary uniform for a generation that subverts everyday style.

Check out Whatever 21's spring '18 lookbook and learn more about the brand, below.

How has Whatever 21 evolved since you first launched?

When Whatever 21 launched in 2012, I started it because I was making digital art that was inspired by and referencing pop culture, athletic brands and corporate logos. I wanted to take the images that I was making for the screen and turn it into wearable art. I did as much as I felt like I could do screen printing on pre-fabricated clothing at that time, so I learned how to actually design and create garments. Whatever 21 is now a high-concept clothing brand that is primarily cut-and-sew. The brand has evolved from me screen printing t-shirts on the floor of my tiny Bushwick bedroom and selling them off a fence on a street corner to selling and being featured in publications internationally.

Whatever 21's look has, in many ways, been coopted and repackaged for a mainstream audience by other brands.

I could write a whole essay on this subject, beginning with the fact that Whatever 21 started off co-opting brands that are geared toward a mainstream audience. Its kind of interesting because people have approached me to talk about possible collaborations with some of the brands that I initially was parodying. It's like the same thing that happened with Dapper Dan, who is truly my fashion idol. I feel like at this point most people know the story, but for those who don't, in the '80s and '90s people wanted luxury-brand streetwear that just didn't exist at the time. Dapper Dan had the Louis Vuitton and Gucci print fabrics at his shop in Harlem, and was making custom pieces for Salt N Peppa, LL Cool J, Nas... everyone wanted to get some Dapper Dan. Eventually he was sued by the brands he was co-opting and thrown in jail. Now 30 years later, Gucci is copying a fake Louis Vuitton piece that he made in the '90s, calling it an "homage" and offering him a job. Its fascinating to see the cycle of fashion. Maybe I'll be creative director of some big athletic brand one day. [Laughs]

Knowing ideas trickle up in fashion, how do you keep your point of view fresh?

When I'm designing a collection I ask myself two questions: What do I personally want to wear, and how have I never seen it done before? I try to keep things always looking current, but I also want things to look new and exciting. I try to think about how far I can push a concept in my head and have it still be wearable. I turn to my friend Cecily Feitel a lot when I'm stuck to get a fresh point of view. She designs accessories under the brand name Ghostmodern and we've collaborated on certain pieces, two runway shows, and two lookbooks.

What were you thinking about for spring '18?

I was looking a lot at icons of the early 2000s like Paris, Xtina, Britney—bright and blingy, but also with a more street, urban unisex edge and a dark twist that always comes along with any Whatever 21 collection. Again, I turned to Ghostmodern to help out with giving the extra little bit of shine with the crystal details. We did shirts that say "Everyone Is Lying" and "Poser" in Swarovski crystal because there's always a duality with my work. Things can never get too cheery without a little darkness, and things can never get too dark without a little bit of humor.

What's the significance of the location for this lookbook shoot?

The photographer Sarah and I were talking about wanting to do a shoot in the suburbs that reflected the apathetic, angsty teen that I once was and in so many ways feel like I still am. We shot this at my grandmother's house on Long Island. It made the whole thing feel super personal to me because I've been visiting this house my whole life and even lived there for a summer when I was 16. The shoot is reflecting the idea of the house that one kid who has all their friends over after school to hang out while their parents bring out bagel bites, Doritos and Mountain Dew. It was really a trip bringing a crew of my friends to my grandmother's house. My Uncle Nick who lives at the house got really excited about everything and was offering help in any way he could. That's actually his car and his dirt bike in the photos.

Talk me through your cast. Who are these models and how do they speak to Whatever 21?

For this shoot we wanted to use people we knew that radiated youthfulness to address the idea of the location and the concept of suburban bad or sad kids. And as always with Whatever 21, we tend to favor artists vs follower count. All the models are extremely bright and talented, and such a pleasure to work with. Blayke is someone I met through my roommate who has been working extremely hard on his music. Anna I've known for a while and she's a super badass who is also a musician, singer/songwriter, rapper, and professional makeup artist. Jei I discovered through mutual friends via Instagram and was instantly drawn to his living anime character look. He also does video work that you can see on his YouTube channel. Alandra is someone who has just recently moved to NYC and is already making herself a name on the scene. I met her via the casting call for our NYFW show in September. We didn't go with her for the runway, but thought she was perfect for the shoot.

What's the balance between commercial success and maintaining a subversive perspective?

If something isn't at least a little bit subversive it's boring to me. I want to make work that makes people feel something that they weren't expecting to feel. It almost doesn't even matter to me what my work makes them feel as long as they feel something other than nothing. I definitely like to challenge the idea of conventional fashion and streetwear. It's a struggle because I do need to eat and pay my bills, but my hope is that what I do resonates enough with people enough they feel like they really want to own it.

If you could wrap up the attitude of this collection into a single song, what would it be?

My homie So Drove made the runway soundtrack for our NYFW show. His track "Get Ya Shine On," featuring CupcakKe, Kreyshawn and TT The Artist was the centerpiece of the soundtrack. Aesthetically, it ties the flashy crystalline early 2000s pop diva look to the workwear side of the collection... "Go ahead get your grind on/ Go ahead get your shine on." It also resonates with my lifestyle because I work really hard, but also want to present myself as living my best life. It's the "grind and shine" anthem that sums up Whatever 21 as a whole.