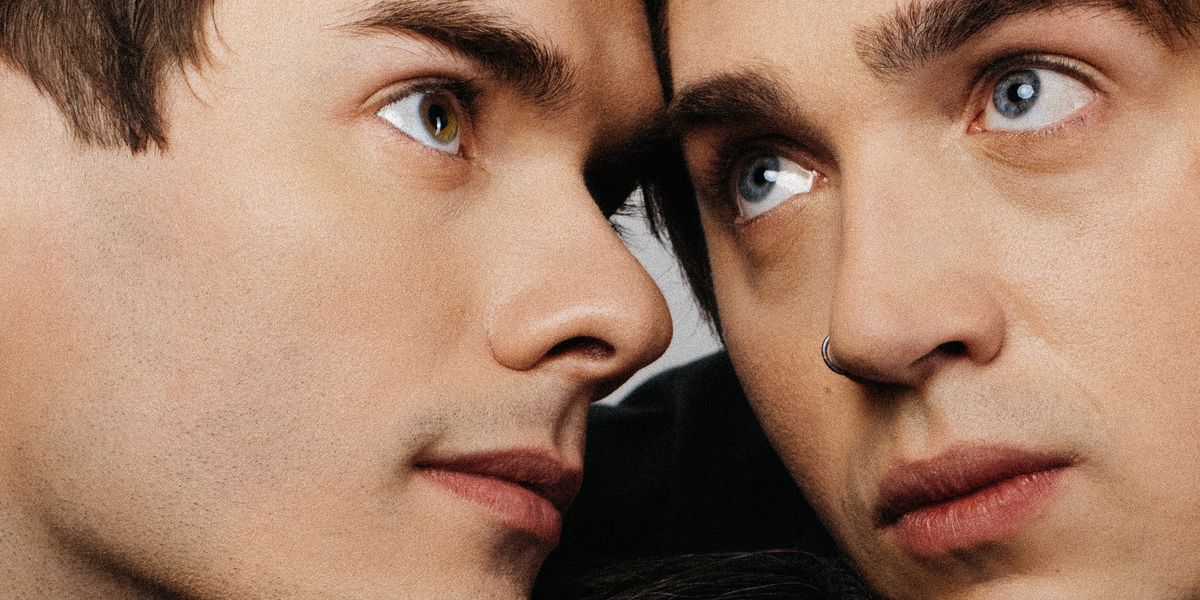 Waterparks released a new single today, but we'll get to that later.

More importantly, Waterparks' Awsten Knight — a self-proclaimed "pup enthusiast" and the band's lead vocalist — provided PAPER with a list of 10 Instagram dogs to follow. On New Music Friday, this is exactly the type of completely unrelated content we're hungry for — especially considering Awsten compiled this immediately after a trip to the dentist, numb gums and all.

But back to the music if we must. "Lowkey As Hell" is Waterparks' first single of 2020 — and 300 Entertainment debut — after last year's FANDOM catapulted the Texas trio to new heights. It's a bright, pop-punky track that sounds exactly like the greatest summers of Warped Tour yesteryear, and also sees Awsten reflecting a bit: "I just cried into a shirt I could never afford last year," he sings.

"The song is a recap of the last year or so," Awsten explains. "It really describes what's been going on and who I am. When I'm on stage, I'm a forward-facing, extroverted presence. At the same time, I'm also the biggest hermit ever. I just like to stay in, ignore my phone a lot and write. I'm naturally reserved in my day-to-day life. The juxtaposition of loud materialism versus private emotion in that opening line really encapsulates the feeling I wanted to get across in the rest of the song."

LIL GRIFFY BOB IS A SWEET LITTLE ANGEL BABY FUCK I CAN'T EVEN THINK WHEN I LOOK AT THIS FACE. I ALSO CAN'T THINK BC MY FACE IS NUMB FROM THE DENTIST, LIKE I CAN'T FEEL MY HEAD AT ALL. I GOT THREE SHOTS IN MY GUMS TODAY. SHIT IS SO BAD, BUT I'D TAKE A BULLET FOR THIS DOG, HE LIVES IN SWEDEN.

ODIE THE GOBLIN DOG. FIRST OFF, I JUST WANNA SAY I'D ALSO TAKE A BULLET FOR THIS DOG, SO FUCKING SWEET. I'm kind of also scared bc sometimes smaller dogs are scared of you. That's why there are some big boys on this list, too. But man, if Odie loved me I'd fuckin cry forever. Walk him around the neighborhood in a picnic basket

Paws of Simba, let's talk about it. The name of this page is actually crazy appropriate because I really just want to hold his hand and I think that's very possible because we are both in California according to his bio!!!!! Literally I am drooling blood from the dentist rn, it's crazy. I ordered food, but idk if I can eat it. But yes, Paws of Simba, 10 stars.

LOVE MIORY IS SO GOOD BC THERE ARE TWO DOGS ON THIS ACCOUNT THAT LOOK EXACTLY THE SAME. The only difference is one has an underbite, which I love. But I think it's SUPER messed up bc they MOSTLY post the other dog that might be more photogenic according to "beauty standards," but those are fake and if that's what's going on here, whoever runs the account, you can FUCK yourself. I do love how groomed they keep the babies, haircuts stay immaculate.

NORBERT!!!!!!! WE'RE FINALLY AT NORBERT, I MESSAGE HIM ALL THE TIME! HAHAHAH I WOULD DIE FOR HIM. Maybe my favorite dog. He's a perfect little angel baby who can do no wrong. Shit on my floor? No problem! Also they said they'd bring him to our next LA show, so I've been bugging our agent at ICM about booking shit so I can finally live my dreams. Norbert is best.

Now we are at Honey B and I'm just laughing, I wanna kiss him or her on the forehead so fuckin bad. I can't though, my mouth is so numb and dry. I straight up can't swallow right now, but it's starting to wear off. I wanna play with little baby dogs ears, but sometimes they don't like that. If I made them do that screech thing dogs do sometimes, then come back wagging their tail I'd bury myself alive. My neighbors have a dog named Saddie and she lets me pet her ears. I love her.

Okay now we are at Larkin. SO! Full disclosure, I didn't love vizsla's that much until I learned that they just wanna sit on your lap and love u all day and that's seriously all I want in a dog. A lot of the little ones are kind of skittish and bark at NOTHING just constantly which sucks. But I want a fuckin needy dog to just take naps on me more than I want anything else in this world.

WALLY!!!!!! IM LAUGHING SO FUCKIN HARD I LOVE WALLY SO MUCH. Especially when they post baby puppy pics, that shit is my moon, sun and stars. I normally hate when people dress up their pets too much. I'm like, "Let them liiiiive," but he's so cute sometimes I forget. But I unfollow accounts if I feel like the owner is just using them for profit, that shit is GROSS. LOVE Wally, though.

HAHAHAHAHAHAHAHHHAHAHAHAHAHAHAHAHHAHAHAHAHAHAHAH DUDE I'm kinda fucking freaking out I love Shih Tzu's so much, I think they might be the funniest. I want one bc when they just stare it's the best, like I'm laughing right now and it hurts the right half of my jaw so bad, I hate the dentist. I'd die for Dougie, though. Also I've literally never messaged him which is crazy to me. Just messaged, "I love you so much."

ALRIGHT! GLAMOUR GOLDENS has a bunch of Golden Retrievers and I get called basic for loving them, but PEOPLE LOVE GOLDEN RETRIEVERS FOR A REASON FUCK OFF. They got Lambert, Hunter, Teddy, Leo, Chase, Lilah. Seeing all their names in a row makes me think of this LOL. But yeah, I just want to lie on the floor while six Golden Retrievers crush my fucking bones running inside. What a heavenly way to die.

IF ANY OF THE DOGS OR THEIR OWNERS SEE THIS, HMU OR DON'T, I ALSO GET THAT.