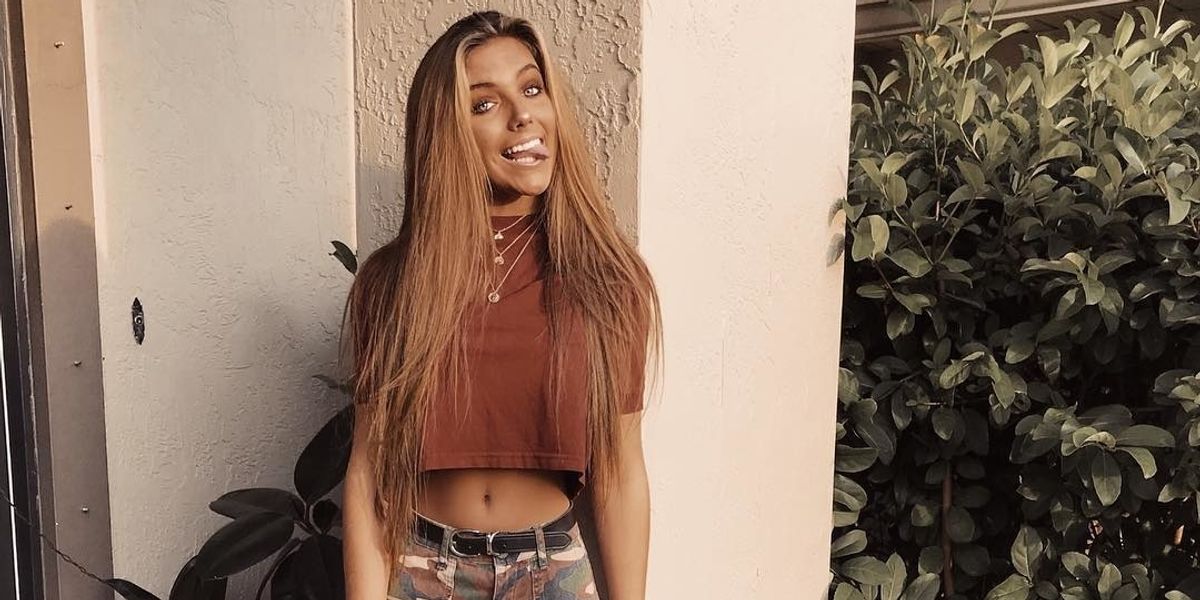 Why Gen Z’s VSCO Girls Are Cool With Being 'Basic'

If you've been online at all in the past few weeks, you've likely stumbled upon one of the dozen explainer articles on a recent Gen Z-spearheaded trend known as the "VSCO girl."

Taking its moniker from the minimalist-leaning photoediting app of the same name, the term is applied to teen girls who love "scrunchie hair ties, puka shell necklaces, Hydroflask water bottles, and either Crocs, white Vans or Birkenstock shoes." Effortless, yet aesthetically-pleasing, the typical VSCO girl is seen as the kind of cool, environmentally-conscious beach girl skating down the street on a pink penny board — her look complete with beachy waves, braided bracelets, and a Polaroid camera in tow to snap the day's adventures. In simpler terms, Seventeen describes the aesthetic as "preppy but laid-back, beachy, trendy, and basic." But it's this connection between the current VSCO girl designation and 2014's "basic bitch" moniker that's given some pause.

The VSCO girl may be widely recognized within these explainers as the next step in the basic girl's evolution, but according to commentators, the newer term is more "empowering," "celebratory," and "less misogynistic" than its predecessor. Historically speaking, basic has morphed into a derisive term used as shorthand by others to describe women thought of boring, unoriginal, and unbearably white. But for some reason, the younger generation is proud to own the label — as evidenced by their use of the hashtag as well as their steadily rising engagement numbers.

As VSCO's Julie Inouye points out, as of last month, the #vsco tag on TikTok has garnered over 1.4 billion views and there are currently 1.2 million-plus uses of the #VSCOgirl tag on Instagram. Obviously, many of these teen girls seem to be actively (and unironically) embracing the label, but what exactly is the appeal of being labeled a descendant of the much derided "basic bitch"? Well, it's slightly complicated, but it could have something to do with the changing ways in which Gen Z sees themselves.

Kara Kittel — an emerging tech producer who specializes in studying interactive media — speculates that it's because Gen Z has grown up on social media and, as a result, have "always been very aware of how they've presented themselves." Noting that many of the videos (especially on TikTok) parodying the VSCO girl trend are made by self-proclaimed "VSCO girls" themselves, Kara says that the younger generation is much more open to "performing caricatures of themselves and making that a part of their content."

Sydney Serena on Instagram: “found the coolest hidden staircase the other day 🙃”

This is in stark contrast with previous generations who, notably, rejected any sort of external categorization when it came to the trends and subcultures they latched onto. Whether you were labeled an "emo," "hipster," or "gamer," the response to being lumped into a preordained category felt like a black mark. After all, for a group of people bred on ideas of individualism and irony-fueled distance from certain cultural markers, being told that you weren't as counter-culturally transgressive as you may have thought was the rudest possible thing you could hear. However, this is a concept that the self-aware Gen Z appears to be actively eschewing. In fact, some could even go so far as to say the label is evidence of teen girls taking back ownership of their interests within a society that regularly weaponizes and dismisses their interests.

On this note, others believe the rise of the VSCO girl is more about younger women's confidence when it comes to reclaiming a rebranded version of something they've always done in some form or another. After all, as YouTuber Mai Pham — who produced a popular VSCO girl makeover video dubbed "living like a vsco girl for a day" — posits, "whenever something is trending it is going to be seen as 'basic' because so many people are doing it." So then why not just own it with a dash of self-awareness?

And this hypothesis also makes sense, especially seeing as how the actual lineage of the VSCO girl is easy to trace from the aforementioned "basic" term. Because while the internet's collective fascination started with "basic bitches" — pumpkin spice lattes, leggings, Uggs, et al. — it didn't take long for the derision to move on. But to what? Well, it's something Kara describes as the aesthetic of "artisanal coffee pictures from above" — a vibe that some have linked to the slightly more recent "Tumblr girl" trend, which Urban Dictionary (condescendingly) says revolves around vaguely alternative things like high-waisted shorts, exclusively writing in lowercase, and dip-dyed hair. And perhaps that's why, as Mai says, the VSCO girl has subsequently cultivated an online reputation of being the "2019 Tumblr girls."

"It feels like the VSCO girl stuff is a continuation of the 'basic bitch' phenomenon, but an updated version of that," Kara observes, linking the migration of young people from the social platforms-du-jour to the emergence of these new personas. But Kara also points out that, unlike platforms, the way to get "TikTok famous" is to figure out how to optimize your algorithmic reach. And one of the easiest ways to do this? Hop onto an already popular trend.

"Subculture archetypes have always been a thing, but on TikTok they feel like a core organizing principle of how people make and experience content," Kara explains. "Generalized characters, experiences, and formats are replacing the more personalized lifestyle accounts on other platforms."

Related | The E-Clowns of TikTok

Others hypothesize that the popularity of the VSCO girl can primarily be attributed to its ease and accessibility, especially given the fact that a big chunk of being a VSCO girl seems to revolve around a penchant for certain name-brand items marketed as "good quality" at a medium price-point.

As YouTuber Sydney Serena — who uploaded a video "transforming into the ultimate vsco girl for a day" — explains, "the style of a VSCO girl is generally simplistic and not overly elaborate." According to her, the trend is "generally very relatable to most teen girls," seeing as how buying an $80 Fjällraven backpack from Urban Outfitters is way more accessible than many other aspirational Instagram influencer trends — i.e. exotic vacation snaps, posed pics in front of the Coachella ferris wheel, and DLSR-shot photos of fancy cocktails.

That said, despite the trend's egalitarian rhetoric of empowerment and accessibility, the VSCO girl has come under some scrutiny. Aside from questions related to unintentional viral marketing for brands, some have also pointed out that there appears to be an underlying racialized aspect to the entire concept — something you can argue shows that there's still a relative link between the VSCO girl and the exclusionary "basic white girl" persona.

As Mai (who is Asian) found through her research, there's a somewhat privileged undertone to the entire VSCO girl movement, as they tend to be seen "as thin, white, and [with] enough money to buy the VSCO-y things."

"I think that it is upsetting that a trend has to have a certain standard for someone's body type and ethnicity," Mai says, before pointing toward the comments saying that her friend — who is white and thin — "looks like a VSCO girl, you don't." All despite the fact that they do the same exact things.

Not only that, but she points out that she's been seeing women of color making "their own VSCO girl videos," but titling them things like, "black girl transforms into a VSCO girl," which shows "how exclusive the VSCO trend can feel."

Either way, it's a trend that doesn't seem to be dying out anytime soon but, in the meantime, at least we have an explanation for why every REI seems to be backordered on Hydroflasks.