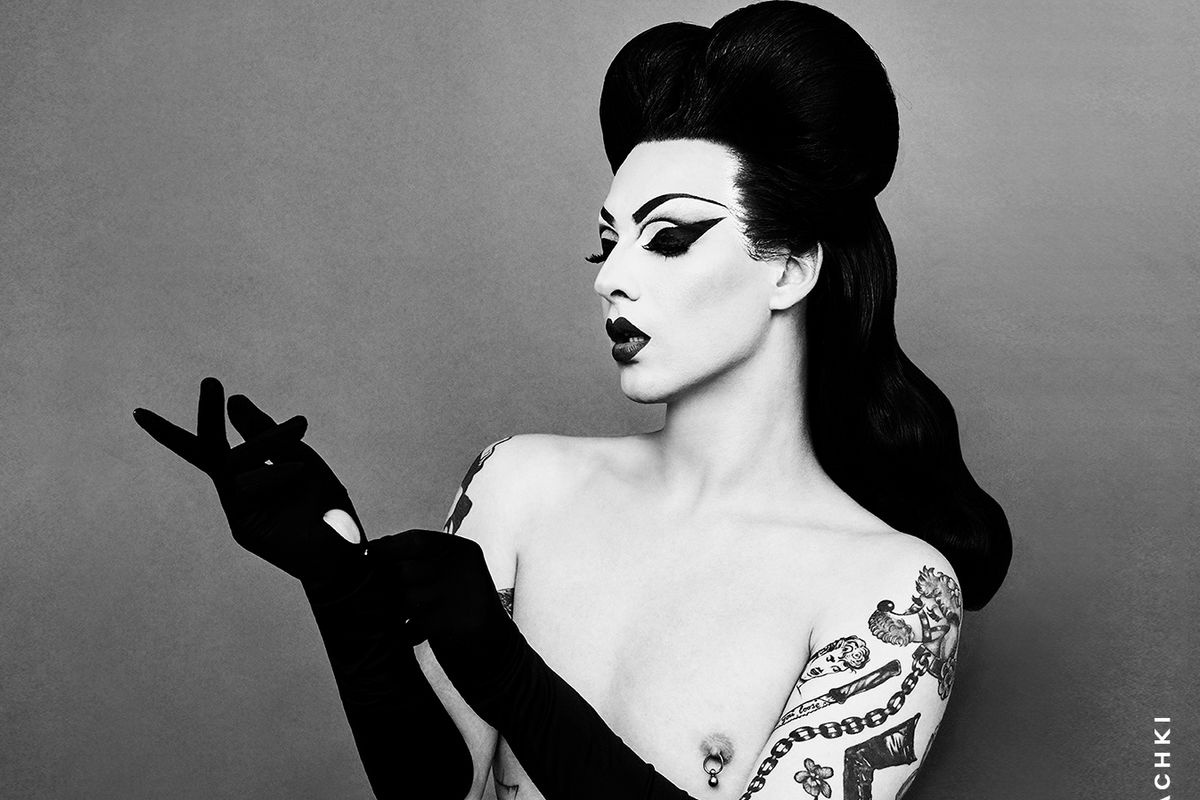 Violet Chacki's new gender bending fragrance challenges an industry traditionally driven by the simplistic binary of musky masculine and floral feminine. By teaming up with clean and genderless perfume brand Heretic, the drag artist and burlesque performer aims to dismantle the very foundation that many bigger fragrance labels thrive on.

Her debut perfume "Dirty Violet" leads with notes of violet leaf, jasmine sambac, patchouli, cedarwood, and labdanum, embodying Chacki's androgynous and sultry spirit. "If I find a certain dress which I do like, which is very rare, I like to wear it in drag and out of drag and it definitely needs to have a gender-neutral feeling," Chacki tells PAPER. "Conceptually what I love the most is androgyny; I like being a little bit feminine when I'm out of drag, and a little bit masculine when I'm in drag. I think it's balanced with the fragrance."

Although this marks her first foray into beauty, the former RuPaul's Drag Race star has tirelessly advocated for empowering people to be their "sexiest" selves, throughout her career spanning runway shows for Moschino, a skincare campaign for Pat McGrath, and her glamorous Met Gala debut.

As she sets to embark on one woman show in the spring of 2020, Chacki tells PAPER about her new collaboration, the power of drag, the shifting standards of beauty, and what inspires her to keep taking up space in a notoriously exclusive industry

It's interesting you mention Bettie Page, because people have called you the living embodiment of the 1950s feminine stereotype. How do you feel about that?

When you think about the 1950s, there were just so many things that were problematic. I'm really the antithesis of that. But as far as Bettie Page is concerned, I mean everything that she was doing got scandal because she was taking all of these provocative photographs that pissed people off, so they all got burned. It's very rare when you find an original negative of Betty Page, because a lot of the photographs had been destroyed, because there were people that didn't do smut. I definitely think that is someone I can relate to and embody, someone who's a rebel, but is also beautiful. In that aspect, I definitely relate to somebody like Bettie Page, and I obviously relate to the aesthetic of the 1950s. But generally speaking, I don't want to be considered as someone who embodies the 1950s. It was definitely a problematic time.

You've categorized drag as a fetish in the past, calling it "exhibitionism at its best." Why is that, and what do you think about the drag scene today? Do you feel like a lot of it has been commercialized?

I mean, it's definitely been commercialized, and there's definitely pros and cons to the commercialization and commodification of drag. Queens have always been attention whores. We love attention and there's no other explanation for it. But where it came from, it was really rooted in going against the grain and being punk and being on the outskirts of society.

How do we go back to that?

I mean it's always going to have that for me at its core, and I'm always going to find subversive ways to still do that. I think it's not really punk to do drag anymore in the drag world, so the next step is really taking it outside of that.

For me, for instance, going to the Met Gala or going to couture fashion week or going to events like that and being in drag, being a cross dresser and taking up space as a queer person in unconventional spaces, is the next step for me. I think there's still definitely some punk aspects in those situations, but it's really not punk anymore to go to a drag show dressed up in drag, leave the house and go to a drag show, or make a YouTube tutorial. Those are so safe; those spaces are so safe and I think it really is about finding where drag and queer people don't exist and taking up space in those areas.

There are a lot of beauty brands and fashion brands now that are making queer representation a big part of their identities with their campaigns, but do you think there's adequate acceptance of different gender identities within beauty specifically?

It's a hard question to answer. I think yes and no. I think what's really happening is that people are starting their own beauty brands and there's queer representation in that, there's a beauty brand for everyone at this point, and so you can really pick and choose who you want. As far as major beauty conglomerates like the Estée Lauders and the L'Oréals, I don't think it's going to get to that point, but there's so many options I don't really think you have to choose. As far as visibility is concerned, I think everyone loves visibility, everyone loves to be seen and to be themselves. That is happening, for instance, if you go to Sephora, you can see my picture at the Pat McGrath counter, and I get tagged in it all the time on social media. It is happening in a certain way but obviously more visibility is always going to be better.

It is happening but it's going to be more beauty brands that are based on social media and do Youtube videos, you know, that sort of outlet. There could be more, it could be better, it could be worse. It's hard to say. I think for right now, things are going well, and I think things are progressing in the right direction and there is lots of representation for minorities throughout the beauty space.

"I don't know how much longer these bigger companies are going to be around. I don't think anyone is rushing out to buy the latest commercial grandma makeup product."

Do you feel like a lot of bigger brands still treat diversity and inclusivity as more of a trend in terms of tokenizing marginalized communities and minorities?

I think it's treated as a trend by certain companies but it almost feels like the vibe is: either change or become extinct. I don't know how much longer these bigger companies are going to be around. I don't think anyone is rushing out to buy the latest commercial grandma makeup product. What are the companies doing to diversify, stay current and relevant? I don't see them staying relevant for that much longer. So is it really such a bad thing they see it as a trend? That might be what needs to happen. Some of the brands that aren't taking it seriously, they'll just be extinct and that's not a bad thing.

Related | Never Forget That Paris Hilton Is a Perfume Mogul

I can definitely tell when it's not authentic. I get emails about being a part of projects or campaigns, and you can tell who is taking it seriously, and who is treating the models and the people who are actually out there representing the diversity in the campaign seriously and who is not. And who is treating it as tokenism, or as a trend. Just for Pride season or whatever the case may be.

Do you have any favorite beauty brands?

Definitely Pat McGrath. Pat really has changed my life as far as first off just being inspired by the artistry of makeup and of beauty, and just the idea of transformation, and then to create a brand that champions diversity, and inclusivity and truly doing it at its core. She puts her money where her mouth is, you know what I mean? She's definitely my number one top. The products are beautiful, where she comes from is beautiful, she's beautiful, the campaigns are beautiful, inclusivity is beautiful, the diversity is beautiful, so I mean for me she's like the total package. She's got the fashion factor, the artistry factor, the cool factor, and she's super genuine. For me, she's number one as far as the really big companies.

What was it like working with her? I've heard she's really passionate. Was that challenging it at all?

Yes, she is. And no honestly, I mean I think that we have such a mutual respect for each other, I feel like it was the same. She was honestly such a joy to be around, and that's why she's been in the industry for so long, because people just love being around her. She is very passionate, energetic, super positive and hilarious. I really love being around her, and just seeing her work, seeing her efforts , being such a boss, own her company and own her decisions and own all of her artistry at the same time is really powerful and wonder. She's like a dream come true, and she was always just like: 'come in, do your makeup we are going to use these products, we're gonna touch you up, model, just have fun.' It was easy and it was just a joy.

Going back to the scent. Do you have any scent related memories, or just one smell that brings you back to something or someone?

It's hard. I would have to smell it to remember it. I really do love the smell of leather. I think it's beautiful and I have like a whole closet filled with custom leather pieces, and it definitely has a certain smell. I love the smell of the beach. I don't know, again I'm really not too big into unnatural, smell of things. I love the woodsy smell, like a campfire. I went camping as a kid. So that's another smell for sure. I went through phases. I went through like a Burberry phase, and that was my signature smell for a while, I went through a Chanel phase for a minute.

You've done it all at this point. Beauty, films, and fashion. What's next for you?

I think just continuing to take up space as a queer person in the fashion industry. I'm also doing my one woman show in spring 2020. I just got through finishing the first part of the tour in Europe in September, so I'm taking it to North America. I'm taking it to Canada and the States, and possibly Mexico City. I'm not sure yet on the exact date but we're working on another live performance tour, and that's the most relevant way that I see performing on stage anymore. To do drag on my own terms, and just really curating myself, and curating my performances and curating my art at a creative space. So that's happening in the spring, and besides that it's really just about taking up more space in the fashion and beauty world, as a drag queen. It's way more rebellious to embrace those things than it would be at a drag show.