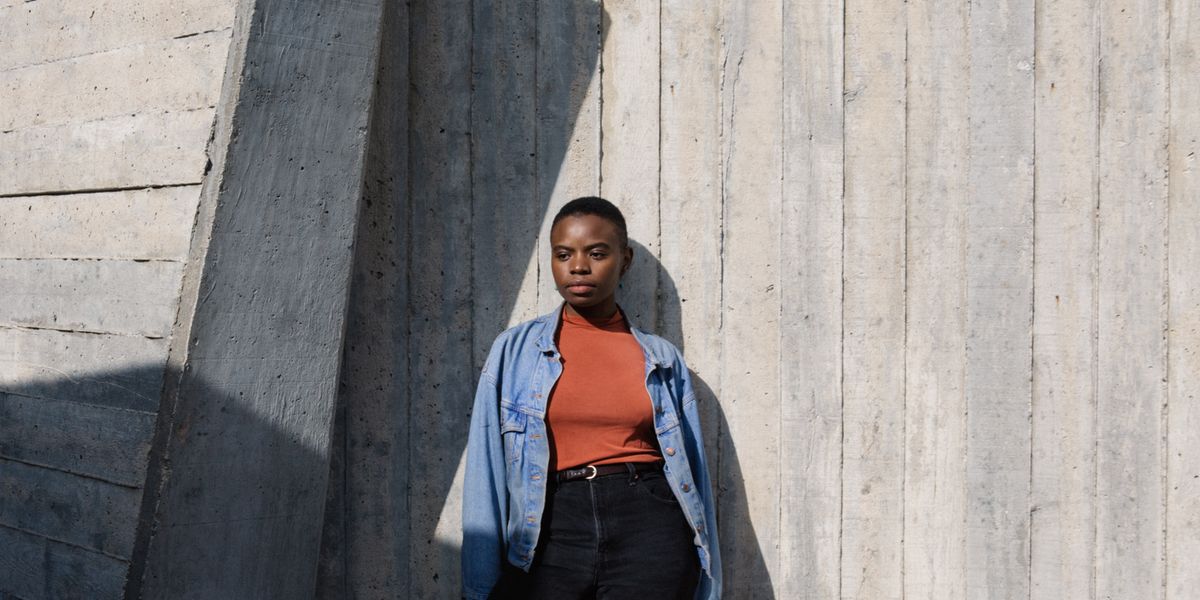 For someone whose moniker implies listless wandering, 24-year-old Lætitia Tamko is pretty grounded in the reality of NY DIY in 2017. Cutting her chops at Silent Barn and Shea Stadium shows alongside some of Brooklyn's underground indie finest, the New York-via-Cameroon resident did it all while still working full-time and pursuing an engineering degree. As such, it should come as no surprise that Tamko -- despite delving into a genre with sounds rooted in an unpracticed, stripped-down sound -- radiates intense creative confidence, steadfast composure and an even-heeled practicality.

So ahead of her debut album, Infinite Worlds, and it's accompanying record release show at Baby's All Right later this month, we wanted to speak to Tamko about everything from identity's impact on "aesthetic" to ditching engineering for the arts, as well as figure out what the future (and a second album) hold for her.

Let's start this interview backward! So you have one album under your belt -- what's next?

I've been playing music for three years now, mostly making guitar-centric music. But as I write my second album now, I'm shifting in a lot of different places that I'm feeling really excited about.

Different places? As in you're shifting away from guitar music?

Not so much [in terms of not making] guitar music, but just like arrangements -- like I've been writing on synth a lot more. And I think it's this thing that comes with "Oh, you've got this one thing done" and now this [new project will be] an evolution of self and artistry.

Why stop engineering to pursue music?

I guess it was more about passion and realizing that in this country a lot of things are possible. You don't have to necessarily be an academic to succeed or to live. I think it's hard for a lot of people who don't live in the U.S. to see that you can have this kind of perspective on art. [They'll all be like] "Oh, you don't have a degree that's technical? Then well you're going to be struggling for the rest of the your life."

It's kind of like I finally decided I was no longer going to live for anyone but myself. I decided that I just wanted to do things that I care about and I want to do and that's what I'm doing.

That's awesome. As a fellow child of immigrants, it's cool to see you taking advantage of all the opportunities people are given here.

Are your parents big fans?

So were you in school up until you finished the album?

I finished school just before finishing the album. The album took about ten months, because I was in school while working a full-time job, and there were very specific times I could be in the studio. And when I was in the studio, I was sleeping there -- spending like 12 hours working.

Well my parents played a lot of African jazz and African traditional folk music. My parents would have little gatherings where people would just sing and play music and that's how they hung out. So going from that to when I moved to the U.S where I was listening to Alicia Keys, that first album. Usher -- there was an album called 87 that was him shirtless. That, and Mariah Carey. I met Mariah Carey within a month of being in the U.S because she came to my first school to sign books. I don't know what she was doing.

That is such an un-Mariah thing.

Were there any rock influences?

It came pretty natural. I think the instrumentation [of my music] is rock, but I feel the songwriting has some R&B melodies.

Is there any reason why you gravitated towards rock music?

Probably just resources. The guitar was the first instrument I picked up, so it's what I felt comfortable writing on. It was what was around me. And as I started to play shows, the people I was playing with were also playing guitars and had drummers.

I love punk and I feel punk and I feel like punk means a lot of different things to a lot of different people. But it's more of a characteristic to me than [them]. Punk's a genre of music, but it's definitely also a characteristic. I think that [attitude] definitely seeps into my writing and is arranged with the different things I listen to -- like jazz or West African traditional folk. There's also polyrhythms all over this record and I think, depending on who listens to it, everyone gets a little piece of it. On the surface, I think it seems like indie rock, but maybe with time it can have other influences, depending on who's listening to it and what their experience with music is.

I like focusing on the attitude of punk rather than treating it as purely aesthetic. Especially since it feels like a lot of indie's new wave is so aesthetically-driven. It's so determined to adhere to certain sonic signifiers that you end up wondering, "Wait, that wasn't a rip-off of so-and-so?"

Right, that's the thing. I feel like some people feel a lot of ownership to punk you know? But the people who actually have to fight to live, it's like, "Wait, those are the punk as fuck people." The people whose right to [achieve] the most basic of things, that's punk. Like, Nina Simone is punk. She was shredding on piano, which may be seen as jazz or soul, but she was punk as hell.

It's been refreshing for me the last year or two to see my friends who don't have the privilege of having that neutral introduction to their music -- where people just think about their music and that's it. Just thinking about all my friends who are women of color or people of color who are killing it and just this very personal camaraderie that we have with each
other -- this silent supportive thing. It makes it feel okay.

Yeah, I mean it's no secret that people and women of color work so much harder, but we have to be so much better at what we do. Otherwise some mediocre white guy can easily outshine us.

And even then people will try to take away our work...That's why the more of us there are, the easier it is to share that with someone and be like, "That's ridiculous, right?" [It's important to] just have that validated, because otherwise you can kind of go crazy.

Right. And, you know, on the other end of this, there's also that tokenization of certain facets of your identity that people tend to cling to.

I think that I've gotten really good at responding to those kinds of things. I only talk about things I really want to talk about, and that's kind of my right [as an interviewee], you know what I mean? Tokenization is inevitable, I see it all the time -- even apart from music, just in life. It's a part of our experience, just being able to spot it and knowing how to quickly repel it or use it to scream about your message.

Yeah, totally. But at the same time it's also like, "Fuck, is this going to be my narrative forever?"

I was worried about that for a long time, and I still don't know how to not to let it be. But I do know that people are complex, like I don't want to talk about my body in every interview or my race in every interview. It's kind of like, "Yeah, that's a part of me, but I also work really fucking hard on this. I play every fucking instrument. Ask me about that."

Again, it's crazy how some people have to work twice as hard as everyone else.

Yeah, exactly. Part of the reason this record took as long as it did was partially because I really wanted to feel like I knew what I was doing as a musician, so that no one could question it. No male name on the credits could be questioned. Because people will see it and immediately be like, "Wow, who did that?" Working so hard to make sure you are respected for what you can actually do versus being discredited is what I'm really about. But the fact that I have to work so much harder just means that I'm ready. I just stay ready. Like I play guitar, keyboard, bass, and drums, [on the album I played] all the guitars and synth. I've played each instrument on at least each track and that was a big thing for me when I was making it.

Damn, so what does that leave your live set-up looking like?

It depends. So far I've been touring pretty consistently alone with a 404 sampler that houses my drums and samples and a synth and a guitar. At any given moment maybe I'll play two or three at the same time. And sometimes I play with a live band, which is me on guitar and synth and sampler, plus the bassist and a drummer.