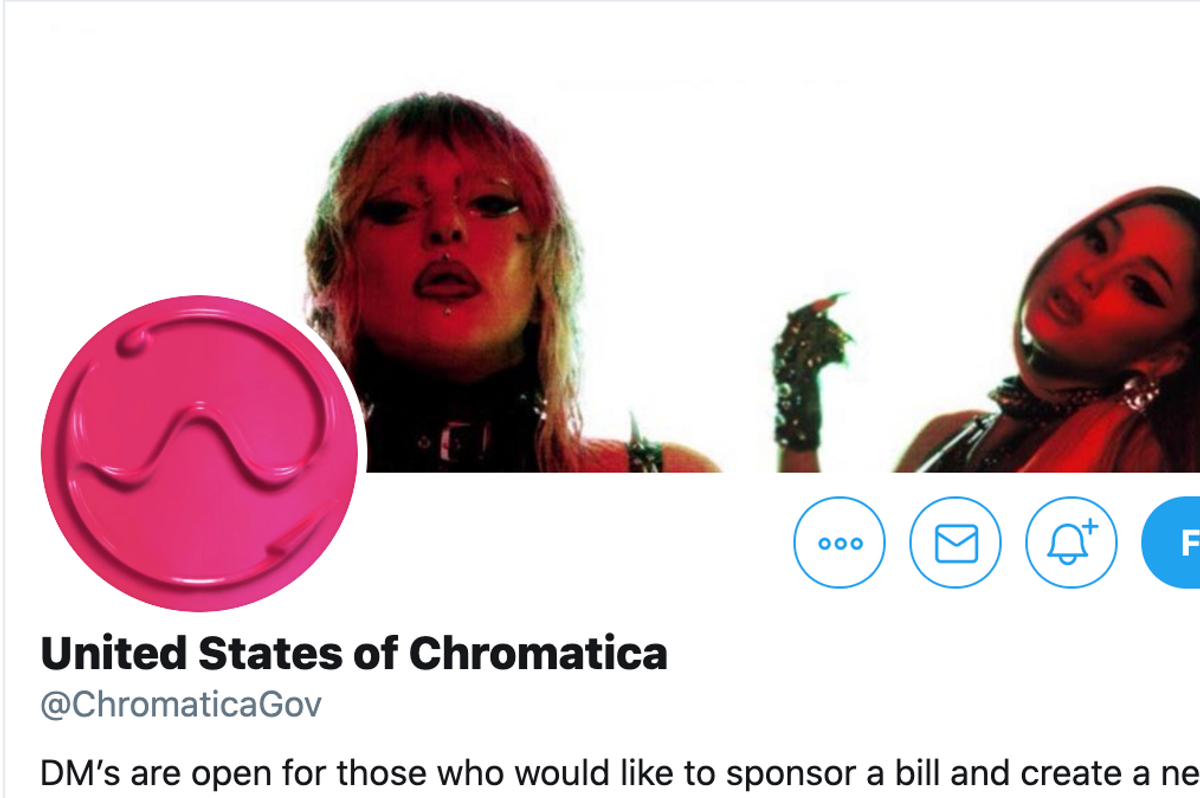 Little Monsters found a home in Lady Gaga's previous music. With the release of Chromatica, they found an entire planet. Gaga told PAPER in her March cover story that the fictional world that inspired her sixth album is a place "that celebrates all things" and where "no one thing is greater than the other."

That's nice and all. But Little Monsters are cutting the kumbaya talk and helping Gaga flesh out the specifics. Specifically, the status of bottom rights (full), the legality of heterosexuality (permitted but heavily taxed), the market unit of ice coffee (a gallon) and the punishment for speaking ill of ARTPOP or Joanne (life sentence without possibility of parole... the prison abolitionist movement has yet to land).

United States of Chromatica isn't your average stan account. It started tweeting a few weeks before Chromatica dropped in May and quickly racked up 60,000 followers through churning out proclamations and decrees about the planet's various laws, customs and public offices. The account is gloriously silly, handing out cabinet positions to Carly Rae Jepsen, Azealia Banks, Princess Peach and BLACKPINK, mandating daily doses of psychedelics, and denying visas to RuPaul, Ellen DeGeneres and Rihanna (until she announces R9). But it also provides a highly cathartic fantasy. On Chromatica, queer social hierarchies are flipped, health care is a human right, abusers are held accountable, and transphobia is punished with intergalactic exile. (Chromatica will sound familiar to anyone versed in the fully automated luxury gay space communism meme). In the midst of our world's apparent collapse, the gays and girls were ravenous for even a Twitter mirage of a functioning, equitable one.

Without stopping the party, the account is also helping Little Monsters self-reflect about the problematic aspects of fandom. When Chromatica dropped a few days into the uprising over George Floyd's killing, United States of Chromatica cut the jokes in order to raise money for bail funds and scold privileged commenters wishing they could "escape" the chaos and take refuge on Chromatica. Beyond the United States of Chromatica, Little Monsters called each other out for Tweeting about "Babylon" instead of Black Lives Matter.

Gaga is following her own fanbase's lead. Tonight, PAPER and Lady Gaga herself are co-hosting a "fundrager" with Zoom party series Club Quarantine to benefit the Marsha P. Johnson Institute, an advocacy organization for Black trans people.

We caught up over DM with the Little Monster behind it all to hear about world-building Chromatica and how stans can be a force for good.

Who are you and what are your name/age/pronouns? Do you run the account alone or with other people?

Hi! My name is Junior and I'm 25 years old. I go by he/him. I currently run @ChromaticaGov alone, which has gotten a bit out of control, and overwhelming at times, but I'm enjoying it. It can get very entertaining. Lol.

What prompted you to start @ChromaticaGov?

It started off as a silly joke with one of my friends on my main account. We were tweeting about the "World Of Chromatica" and I thought it'd be funny to say that cocaine was socially accepted there. That's when I got the idea to create the account and tweet about cocaine being legal. Which somehow went viral!

Do you have much background in the world of stan Twitter? Have you ever run a fan or updates account before?

I'm a veteran on stan Twitter! I started off as a Lady Gaga update account when I was a teenager, and it's slowly evolved into my personal over the years. I still tweet about Gaga regularly but it's more personal now. I've gotten to meet really amazing people on and off social media due to Twitter! We stan Twitter.

Are you a career-long Gaga stan, or a more recent convert? Did you ever waver during Joanne or ARTPOP? Know that would get me kicked off Chromatica.

I've been a Little Monster since "Just Dance" and I've never gone anywhere since. Every single era has played an important part of Gaga's career (and my life) and I feel that she needed to do all of it to be able to give us Chromatica. Lady Gaga is a true artist and isn't limited to a single genre. She's so versatile and is amazing at anything she does. I love my dance-pop music, but there's so much more to her than that.

What does Chromatica mean to you?

To me, Chromatica is a LGBTQ+ utopia. It's a place where everyone is welcome, but it was created with the gays and girls in mind. The collaborations, the fashion, and the entire fantasy that Gaga's been teasing so far, is for us. Period!

Are you coming up with most of the tweets by yourself or sourcing some from DMs?

The majority of them do come from me but when I need a little bit of inspiration I do turn to the DMs. There's constant suggestions coming in from stans hoping to see their fave make an appearance on Chromatica... or to see their fave's enemy be banned. I try to keep the tweets unbiased. I think all female pop stars are iconic in their own way, so I won't be banning any of them. I'll leave it up to the followers.

What's been the most "popular" announcement about Chromatica so far?

Wow, I had to go back and look! Ironically it's a tie between the banning of Ellen Degeneres and heterosexuality not being ideal... Both are at 47k likes. Those have definitely been quoted the most too.

When you started tweeting, did you expect it to take off like this? What was it like gaining 60 followers in a couple weeks?

Absolutely not! I don't think you could ever really expect this type of reaction! My friends have been sending me news articles all week and a lot of people have been reaching out. It's Insane.

Do you think people are even more into the idea of imagining this Gaga utopia because of the pandemic/recession?

It feels like the aesthetic of Chromatica is merging with the "fully automated luxury gay space communism" trope. Did you have that as mind as you've been tweeting?

"Fully automated luxury gay space communism" is everything LMAO. I couldn't have worded it better myself. Iconic.

Can we get an exclusive Chromatica factoid? Can you reveal which stanbase is under investigation for cyber-terrorism?

So there was a rumor going around that Taylor Swift's fans were responsible for "Rain on Me" leaking early. I received tons of requests to ban them indefinitely, but I was unable to find any concrete proof to back up the accusations so I decided to throw the entire case out! Swifties are also more powerful than some real life world governments, so that may have played a role too.

What is Lana Del Rey's status on Chromatica?

Lana Del Rey doesn't currently hold an official position, but @ChromaticaGov believes in everyone having the right to vote, so I created a poll so that they could all decide on. They have allowed her to stay but hold no official position. Perhaps I could reconsider in the future. I love Lana.

That social media is INSANE and although there are tons of trolls online, there's so many other people who genuinely are just here for a laugh and a good time. We all share the love of music and pop culture, and although it's a Gaga themed account, we can all co-exist on it. I don't really know the future of this account or how much longer I'm willing to keep running it, but I think it'll live forever in our fanbase. Gaga stans are infamous for things like this. Lol.

She hasn't yet, but it would make my day to see her reaction to some of the tweets!

Do you think fandoms can be a part of social change?

If the Tulsa rally has taught the world anything, it's that you can NEVER underestimate the power of stan Twitter. Especially K-pop Twitter! We're all on here for a good time, but when we come together for a good cause, our power is much greater than even we know at times!

It's been very challenging! When I created the account, It was meant to serve as a distraction or source of entertainment during COVID-19. After the death of George Floyd and countless other black Americans at the hands of police, the conversation has absolutely shifted. It's felt inappropriate to joke during very challenging times, so most days I try to use this platform to spread awareness. I've also been out protesting many days, which has limited my time on social media. We may all wish we could live on a planet like Chromatica, but we must remember that Earth is our home and every human being deserves an equal shot at life. If you have time to vote for your favorite pop star to be on Chromatica, then you have time to vote at your local elections to implement real change as well. Period.

Wow it honestly changes on a daily basis, and as it SHOULD for any Lady Gaga album! But it truly depends on my mood!! My current favorite track is "Babylon." "Alice" has gone down as one of my top five tracks LG has ever put out... but ask me again tomorrow it might change again.

Any message for citizens of Chromatica struggling with their current reality on earth?