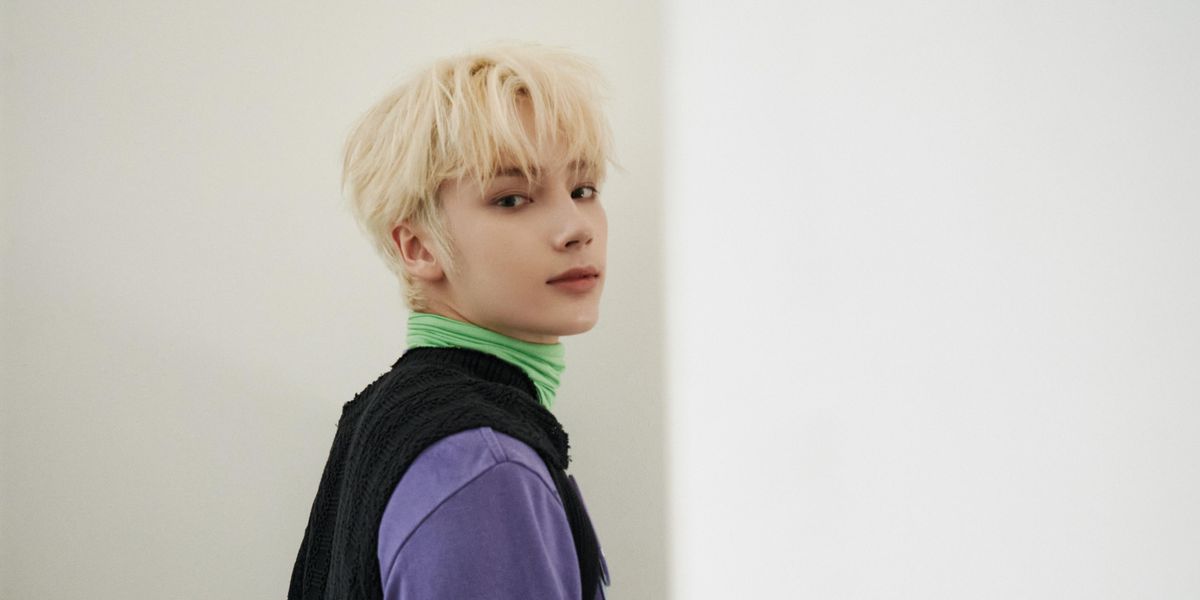 PAPER is spending this week inside the minds of Tomorrow X Together (known as TXT). Check back tomorrow at 11 AM EST for our interview with the whole group.

Hueningkai can't remember a time before music, but he does recall the moment he saw his future. He was five years old and a street performer playing the guitar piqued his interest. The song itself is now a faded memory ("it was a good song," Hueningkai eagerly attests), but the impact it left on him was significant. Because it was in that moment he knew he wanted to be the kind of performer who could beguile a crowd with a single note.

For the first time in his young life, he felt inspired.

A decade later, and only a few months into his career as a member of K-pop act Tomorrow X Together (TXT), Hueningkai sat at a piano in the heart of New York City's Washington Square Park. Surrounded by an audience of intrigued onlookers, he played. And people stopped what they were doing to watch him, mesmerized by his impromptu performance.

"It sounds kind of simple, but I'd like to see more people smile," Hueningkai tells PAPER. "I'd like to see people be happier. That's why I want to create music that can lift people up and give people that happiness."

It's a mission that he sincerely believes in. His presence is joyful. His limbs are long and gangly, and he has a rhythmic way of moving that is often disguised as clumsiness. He wants to make you laugh. Being the youngest member of TXT, the 19-year-old vocalist has often described himself as the one "in charge of cuteness." And while it's true that Hueningkai has an abundance of aegyo (a Korean phrase for cute expressions), there's a real depth to his playfulness. It's not always easy putting yourself out there.

"Sometimes it feels like work, but that's not a bad thing," Hueningkai says. "That doesn't mean that I don't like it, especially when I'm performing on stage."

To be fair, Hueningkai has been performing for a long time. Born Kai Kamal Huening, the teen was engulfed in music from a young age. His American father was a singer and celebrity in China before moving back to the U.S., and when Hueningkai and his siblings (older sister Lea and younger sister Bahiyyih) started to show interest in music and performance, the Huening family moved abroad, first to China and then to South Korea. Hueningkai's music proficiency was deeply apparent when he started picking up instruments. First the piano, then the guitar and the drums. He has perfect pitch, too.

"There were a lot of people around me who played instruments and that led me to naturally develop a love for music and to have this dream of becoming an artist," Hueningkai says. "From there, I just kept trying to achieve this dream."

"I'd like to see people be happier. That's why I want to create music that can lift people up and give people that happiness."

Originally, Hueningkai and Lea had been auditioning together as a singer-songwriter duo, and a talent scout who had seen one of their previous auditions asked Hueningkai to come audition for Big Hit Music, where they were putting together their new boy group. The young multiinstrumentalist came with his guitar and sang AKMU's "Give Love" and Maroon 5's "Sunday Morning." He passed and began his idol training at Big Hit at 13.

Of course, navigating adolescence is hard enough, but add the immense pressure that comes with rigorous practicing and monthly evaluations in dance, rap, and voice, and it will surely make anyone, especially a teenager, feel like an exposed nerve. By the time Hueningkai made his debut in Tomorrow X Together in 2019 and became an overnight sensation, he was still only 16.

"It was definitely challenging," he says now. "There were times when I felt like I was in a slump, and there were a lot of barriers that I had to surmount, but I had a really strong desire to do this. That's allowed me to keep going and to keep pushing myself to become what I wanted to be. Also, the fact that I wanted to tell my story to a lot of people through my music is what drove me to keep going."

Hueningkai has been writing songs since he was a kid. His first song, he says, was penned to uplift people, and its lyrics unsurprisingly go something like this: "We'll always be happy/ We're going to get over this/ And everything will turn out great." Looking back, Hueningkai laughs at its quaintness. "The lyrics were really cute," he says. "Maybe the message was a little childish, but I had fun when I wrote it when I was very young. It's a song that I can still remember."

Now, he's broaching more difficult themes in his music, like the euphoric highs and apocalyptic lows of teendom. On TXT's latest album, The Chaos Chapter: Fight Or Escape, Hueningkai co-produced the pop-rock track "Dear Sputnik." He used the idea of a satellite and how it floats in the vast emptiness of space as a metaphor for loneliness and seeking connection. It's the kind of song Hueuningkai himself needs to hear sometimes. "I like to solve things or deal with things on my own," he says. "Maybe I should try to open up more."

Related | TXT's Taehyun Is Ready for His Next Challenge

But that's the power of music. It's there to help you find the words when you don't know what to say. When he's sad, he listens to "Truthfully" by DNCE, and when he's feeling introspective, he puts on Minseo's "터벅터벅 (Way Back Home)" — a recommendation from Soobin. There is a song for every mood, and that's why he feels a sense of responsibility as a songwriter.

"Songwriting is something that I really wanted to do since I was young," he says. "And now I have a lot more time to get back into it and dive deeper into it and the way it makes me feel. When I'm in the car and listening to music, I look outside and see the scenery passing by. It's really beautiful, and it gives me a sense of tranquility and peace. Sometimes, I feel like the main character in a movie. I want everyone to feel that way listening to my music."