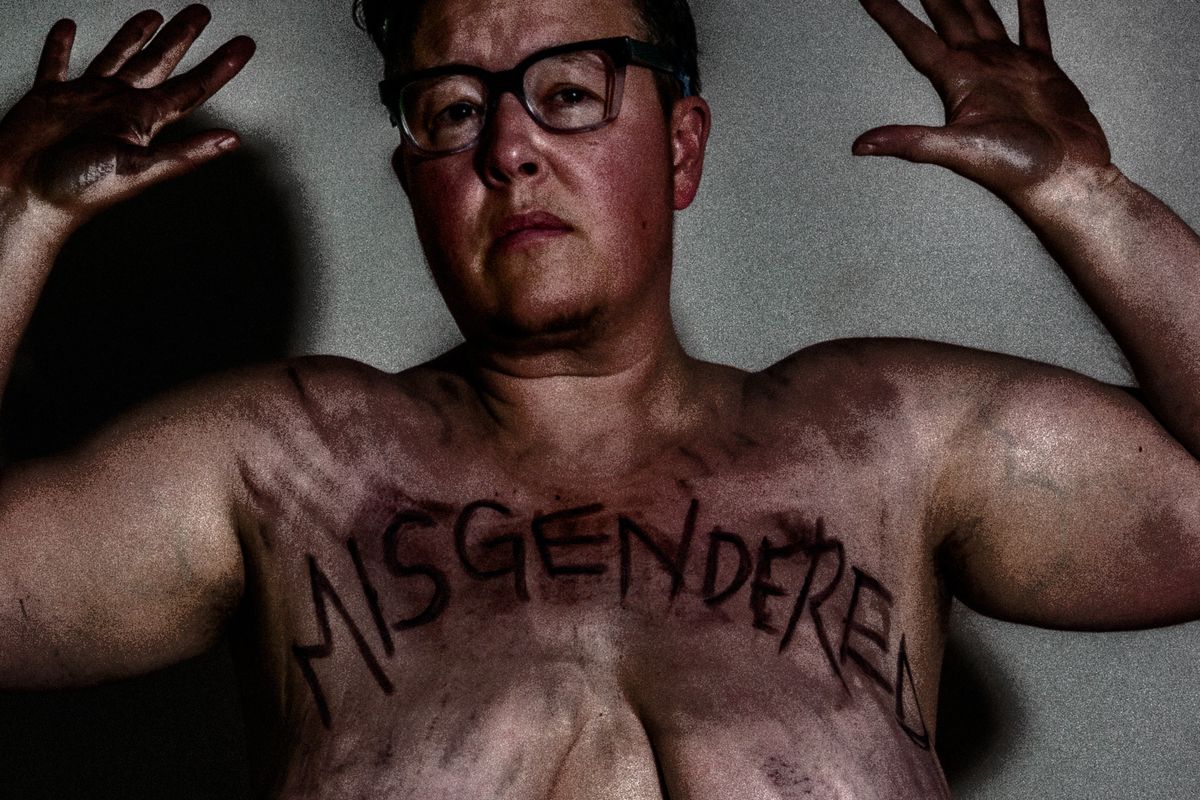 A Transgender Man Captures His Journey Through Photographs

As mainstream America becomes more familiar with the unique journeys transgender people take, both through their increased visibility in media and entertainment and the fraught political debates around the rights we afford and deny them, it's still absolutely essential that trans people tell their own stories, in their own voices.

Los Angeles-based artist T. Chick McClure does just that. Working in the medium of photography, McClure explores themes of gender, identity and authenticity through portraiture (self and of others) and images of the body. While some might find raw, unflinching images like the ones below provocative, if they are meant to provoke anything it's honest conversation and a challenge to current discourse and culture.

Below, McClure writes about being born to a conservative military family in the 1970s and his journey as a transgender man, as told through three photo series: "Milk," "Words" and "Projection:"

For most of my life, I have lived trapped in a body that wasn't mine. I was a shapeshifter. At any given time, reorganizing my molecules at lightning speed to create myself in an image you, anyone, everyone could tolerate better than the real me. Because the real me was a man, a boy, male forced to live inside the body of a female, and to identify as female, girl, woman.

Even before I knew to call myself those words, I knew something was off and I hated myself. I fucking hated myself. I just knew that I felt wrong, somehow. That I wasn't like anyone else but I didn't know how to express it, exactly. I felt alone, shut-down and all consumed with what people thought about me. In the beginning, I just thought I was a boy who didn't yet have his penis. I thought it was just coming later.

I would ask my parents, "Where's my penis? When will I get my penis?" At first, my parents thought this was cute. They would laugh at three-year-old me when I stuffed toads down the front of my pants in an effort to replace what was missing. But soon, it was clear I wasn't supposed to talk about that or feel that way — or walk around with frogs in my crotch. My parents started to remind me, time and again that I was a girl and it became clear to me, even at that age that I wasn't supposed to keep asking for the body I was supposed to have.

I was a boy with no penis, and I couldn't talk about it with anyone. I shut down. I loathed being made to wear girl's clothing, having my hair permed, parading around school in a costume I hated. Socially awkward, I was lonely at school, made worse by the fact that, as a military kid, we moved all the time, forcing me to start over again and again. Happiness was absent for me as a child, unless someone mistook me for a boy. For however long that illusion held for them, I was happy. But it was never enough.

I came into the world bracketed on either side by the deaths of my infant brothers—my older brother living for six months, and my younger brother living for two hours. All three of us came back to back. All three of us, born to conservative, military parents: my mother, a young military wife doing right by her husband who never recovered losing her sons, and my father a cowboy-turned-sailor in the United States Navy. It was a household built on rules, depression and lack of tolerance for being outside the bounds of "normalcy."

This set off my life as a shapeshifter trying for years to make "woman" compute. I was bad at being female. I didn't 'date' but if I did have sex with men, I realized much later, it was just in an effort to get close to masculinity. To be intimate with the body I always knew I was supposed to have. None of those sexual encounters developed into relationships. I stayed shut down, was still lonely and eventually numb, when I crawled into a bottle where I stayed for many years. Drunk all day, drunk all night. It wasn't until I finally came out as transgender to myself and then to others that the shapeshifting stopped. I got sober, I got honest and my art got real.

"Milk," "Words," and "Projections" were created during three distinct phases of my early transition; Not out. Newly Out. OUT.

With the "Milk" series, I was out as transgender only to myself and my girlfriend. That I had not only been able to tell someone my truth, but that she didn't reject me, was enormous. I started to experiment with myself. I stopped wearing makeup, started wearing men's underwear under my clothes and I started making art specific to my gender experience. "Milk" was a means of observing maleness, masculinity, and the physicality of men up close while I stayed behind the lens. From that safe distance, I coveted what they so easily had. These men, delighting in their bodies and their sexuality, unapologetic and covered in milk, that symbolically female-substance, yet they are not suppressed. They are alive, confident and decidedly male. No matter how much milk they drown in, they can't not be men.

"Words" came next. I had begun coming out to family and close friends and had made the decision to transition physically. I started getting facial hair and was basically walking around with boobs and a beard. My chest was too big to bind so I couldn't pass as male and getting dressed was a daily nightmare. I hated my clothes, my hips, my chest, my size triple-H bra that, weighted down by my front, dug painfully into my shoulders all day. As I moved further into my physical transformation, I began to feel more settled in my maleness. I stopped being numb and started getting angry. Angry at the body I was forever trapped in, angry at the labels people had placed on me my entire life. I could no longer hide from how angry at my body I was. My body was a lie, a traitor, and finally my anger was bigger than my fear. I turned the lens on myself—and those labels scrawled angrily across my chest —for the first time.

The words are labels. Labels my body demanded, society demanded, my family demanded. Like my tits, they are just words, but had held me prisoner my entire life. I was declaring, naked and unafraid, who I was—who I wasn't. I am not female. These tits are not mine. I am misgendered. I am MAN.

"Projections" had been cooking in my head for months, but I was terrified to be naked from the waist down on camera, exposing my most hated part of my body: my genitals. With just a week to go before my top surgery, I was forced to shoot before my chest landed in the dumpster where it belonged. "Projections" was about wanting to see myself with the body I was supposed to have. The body that had always been there, trapped underneath all those hips and tits. I wanted to see myself with a penis. A big penis. A giant, fucking cock. I wanted those images to communicate exactly what it felt like to be transgender. To show the body trapped inside the skin I was walking around in. My real body, emerging.

For the series, I projected images of men onto myself. The only requirement was that they were nude, cisgender men, projected onto my nude, very female body. I would emulate their pose and their posture but wasn't trying to line up perfectly. I wanted interesting juxtaposition of his body against mine. I wasn't seeking perfection, I was playing in the abstract. I wanted to see myself with the right parts and I wanted to be able to express visually what it was like to be a transgender man in the wrong body. Shooting these images was fucking huge because I felt for the first time, very solidly, that I was finally in my own voice as an artist. I was elated, I was clearly in my own voice and I felt awesome. I felt high.

I want the work to resonate with and uplift transgender people, but more than that, I want it to resonate on some primal, core level with non-trans people. People who don't understand. People who dismiss us, don't "get" us, have debates about us, hate us. I want to communicate what it's like to be transgender to those people. I want to evoke compassion and empathy and acceptance in cis, straight people AND with transpeople who are still trapped, still numb, still angry, still shut down, still think they have nowhere to go. I want everyone to understand what it's like to feel that your body is not only just entirely foreign to you but that it's actually a perpetual never-ending assault on who you know yourself to be. A physical presence that projects the absolute polar opposite of who you actually are.

Each day, I get further from the rage that consumed me my entire life, as more and more I get to see in the mirror my outside body reflect how I have always seen my body on the inside. I'm no longer a shapeshifter, I'm living as my authentic self. An artist. A man.