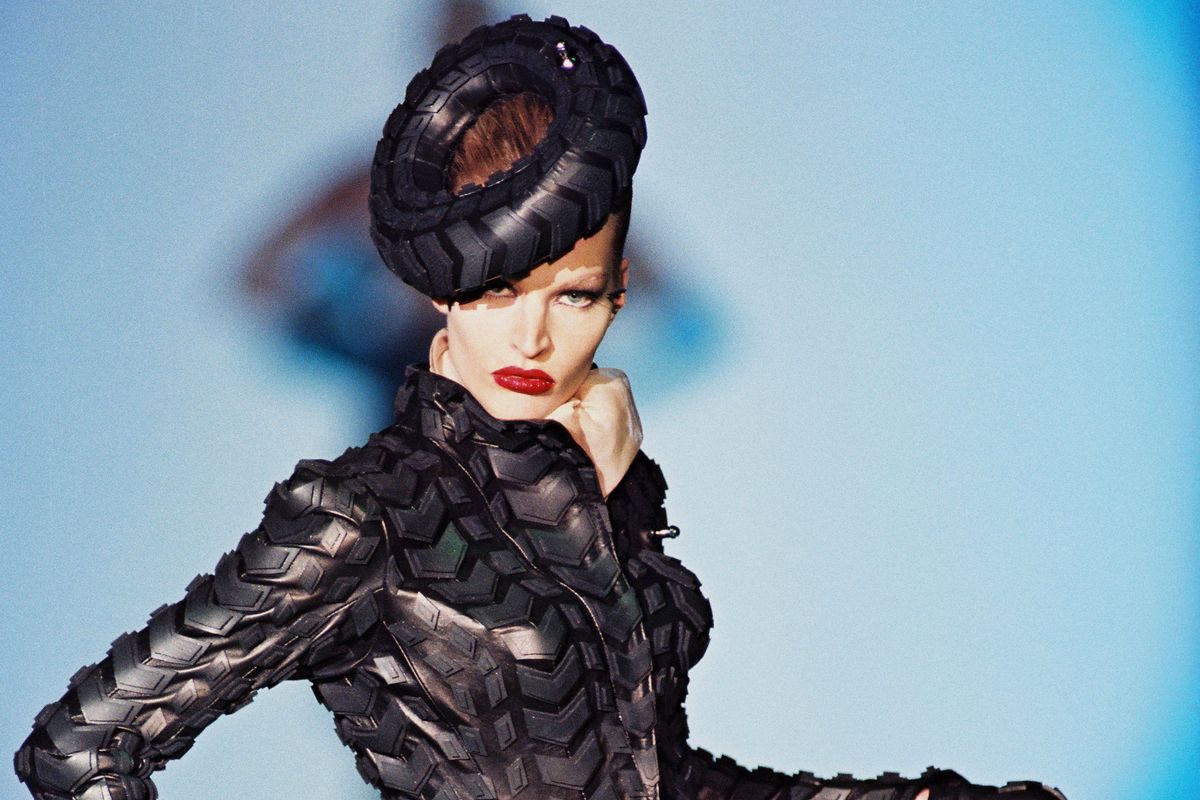 "He basically invented fashion shows," says Thierry-Maxime Loriot of the near-eponymous raison d'être of what may well be the fashion spectacle of the year: Montreal's Thierry Mugler: Couturissime retrospective. Mugler, an acclaimed designer, photographer, director, and quondam dancer — who now prefers to go by Manfred, his original first name — had turned down a host of proposals from the world's leading museums before deciding to partner with Loriot, a famous curator, and Nathalie Bondil, Director of the Montreal Museum of Fine Arts. "He was not interested in opening his archives and looking back, so I thought it was impossible," Loriot explained. "But he changed his mind [because] we wanted to show a singular universe — not a chronological retrospective that would be like a funeral of his work. It is a celebration of an artist."

If there's anyone in fashion who can say they've seen it all, it's Mugler, whose otherworldly designs and dramatic supermodel-laden catwalk shows continually upended the industry between the seventies and 2000s. Yet, Couturissime, a sizzling survey of his storied career in the otherwise freezing Montreal, marks a first for the septuagenarian in that it's the only time an entire exhibition has been devoted to his craft. Bringing together more than 150 objects from Mugler's work in haute couture (and theater), Couturissime spans not only 40 years' worth of output, but also a myriad of mediums. On display are outfits and stage costumes, as well as accessories, photographs, videos, and never-before-seen sketches in one of the museum's most ambitious shows to date. "Most of the exhibition has never been seen by the public," Loriot said, "except for a happy few who were invited to [Mugler's] shows. It's like a treasure chest discovered and shown... for the first time."

Loriot's analogy is apt, although Couturissime is more like a series of treasure chests within a larger all-encompassing one. Numerous sections — or, "acts," as Loriot and co. refer to them — brought to life by notable set designers like Philip Fürhofer and Michel Lemieux, put a spotlight on defining moments in Mugler's career. "Even looking at his archives, [Mugler] was thinking about how he would make [his designs] now, how he would modify them. [He] was very interested in working with other amazing artists," Loriot noted. In addition to Loriot and Bondil's decision not to present Mugler's work chronologically, it is the collaborations with these artists that prevents Couturissime from being a run-of-the-mill retrospective.

One part of the exhibition — haunted by a hologram of a frenzied Lady Macbeth — is dedicated to 16 sumptuous outfits Mugler made for a production of the Shakespearian play staged by the Comédie-Française at the Festival d'Avignon in 1985 — the most expensive since its founding in 1680 by Louis XIV. Further on, amidst glittering Swarovski cherry blossom chandeliers and iridescent sylvan and oceanic backdrops, among other visual feasts, are specimens of Mugler's best-known works. An outfit from the designer's spring/summer 1998 collection, featuring a coruscating flame-shaped corset topped by an asymmetrical, broad-shouldered and slim-waisted red blazer, exemplifies the sui generis 'Mugler woman' and the sartorial superheroines and 'glamazons' that have dominated much of Mugler's work.

"He was inspired by the strong women in comic books he would read as a child," said Loriot, "which he found feminine, powerful, and voluptuous. He really created a world in which women were dominating without men, were strong and independent." Taking the superheroine concept even further are outfits from the species-transcending Les Insectes and all-round supernatural La Chimere collections from 1997 and 1998, on which the exhibit put notable emphasis. The pieces here, replete with plumage, scales, and wings, seem as if pulled from some futuristic congeries, and epitomize Mugler at his most opulent and daring.

That said, it's with his famous fembot piece that, above and beyond all else, his innovation and iconoclasm as a designer really shine. Now the stuff of sartorial legend, the gynoid outfit — made of chrome and Plexiglas in collaboration with aircraft bodywork specialist Jean-Pierre Delcros and industrial designer Jacques Urcun — was first unveiled at Mugler's twenty-fifth anniversary runway show in 1995, and still remains inseparable from the aura of mystique about him. As a singular talking point, it beats even the motorbike outfit from spring/summer 1992, which famously appeared in the promo video for George Michael's "Too Funky."

Naturally, no Mugler exhibition would be complete without some of the striking photographs of his work that have graced the pages of the world's most influential fashion magazines throughout the years. Featured here are ones taken by the late Helmut Newton, as well as other notable photographers like Guy Bourdin, Jean-Paul Goude, the recently departed Karl Lagerfeld, and even Mugler himself, featuring a medley of supermodels in exotic — and, in the case of the vertiginous Chrysler Building photo for Mugler's autumn/winter 1988 collection, dangerous — locales. Preference, though, has been given to Newton, who for decades worked closely with Mugler. "One reason [Mugler] got along so well with Newton [is because] they both lived and created in a world without men," Loriot explained. "[This] is the first collaboration of the Helmut Newton Foundation on a non-monographic Newton exhibition."

At a time when aspects of Mugler's personal life (including his physical and spiritual transformation into 'Manfred,' penchant for bodybuilding and the nude selfie that made the internet rounds in 2007) have often overshadowed his monumental contributions to fashion, Courtissime comes as a welcome, and long-overdue, tribute to his work. And, while it is first and foremost a celebration of the outfits in Mugler's weird and wonderful oeuvre, Loriot also hopes the exhibition will push audiences to be as bold and nonconforming in their own endeavors. "I hope people will understand that we don't have to live in the popularity contest of social media," he said. "It sometimes feels like everyone is trying to fit in the mould [by] being 'liked' and followed. We actually can, and should dare to be different and creative."