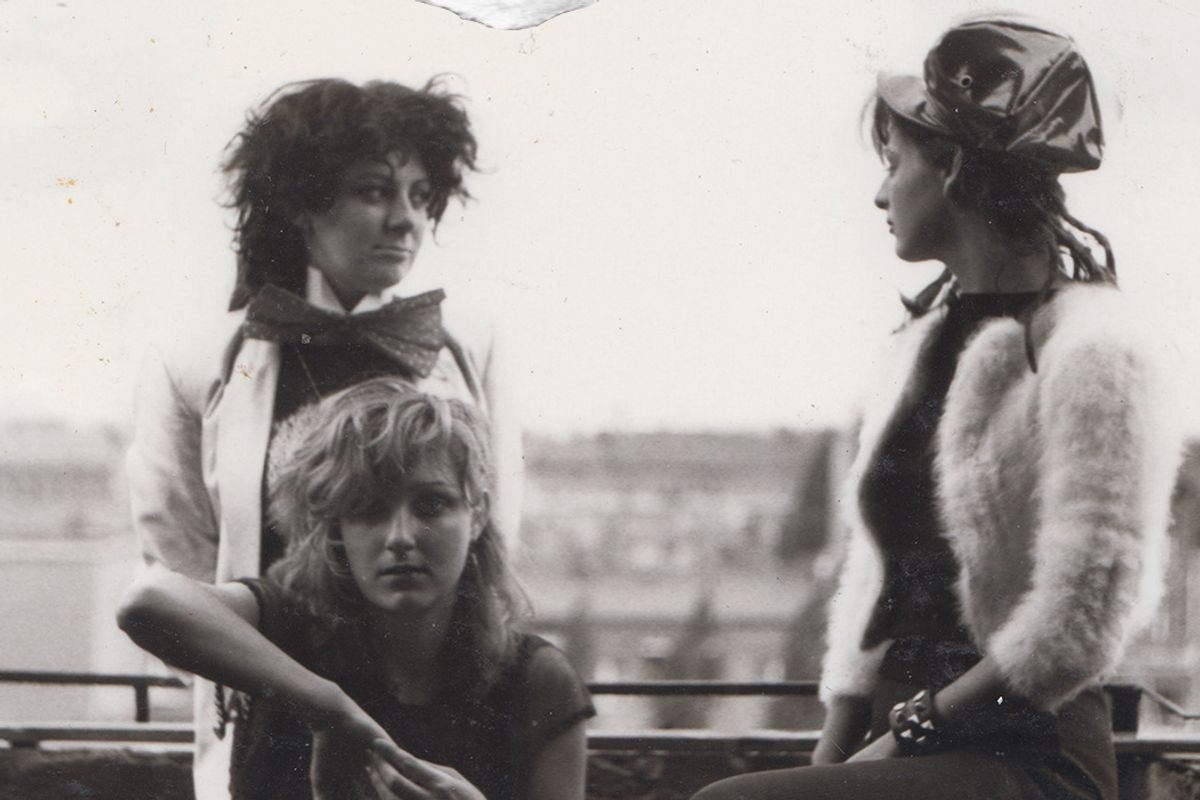 New Doc Questions Why These Pioneering Punks Have Been Overlooked

Even in punk circles, The Slits are often misunderstood — or forgotten altogether, as they generally are in the mainstream U.S. version of the genre's history.

The all-girl band obliterated gender roles when they emerged in 1976 London; they were brash, wild, frenzied and unfazed by societal expectations of beauty or behavior. And while they're regularly labeled as post-punk, that descriptor obscures not only the boundary-breaking inventiveness of their dancehall and reggae-infused creations, but also the reality that they were legitimate pioneers of the era. The Slits didn't arrive on the scene after the fact, but were there from the beginning, playing alongside friends like The Sex Pistols and The Clash. So why aren't they more widely — and accurately — known?

That's what director William Badgley wants you to consider while watching Here to Be Heard: The Story of The Slits. Rather than explicitly tell viewers how unjustly the band was smudged from history, the filmmaker hopes you'll see it yourself.

"[I wanted to] kind of lay this out and let the viewer be like, what the fuck is going on here? Lay out the information and then involuntarily asking this question, like, Why don't I already know about this?" Badgley says.


Watching bassist Tessa Pollitt flip through her meticulously compiled scrapbook, she points out press clippings that focused more on their shattering of prim-and-proper femininity than the group's talent: "Dope and drinks for the gutter girls," reads one, and another, Pollitt explains, calls them ugly.

Founding drummer Palmolive remembers people crossing the street to avoid passing too closely to The Slits, "just because of the way we looked." Guitarist Viv Albertine recalls feeling like a powerful girl gang, then adds, "Because of how we looked, the hair and everything, they couldn't tell if we were male or female, or even humans. And they were scared — they were scared of us. These guys didn't know whether to fuck us or kill us. They were so confused."

The persistence of misogynistic reactions isn't exaggerated by any stretch — singer Ari Up was actually stabbed on the street by a random man at one point. "Here's a slit for you," Pollitt recalls him saying as he sliced through Ari Up's coat and jeans.


"That sort of weird kiosk, bank kiosk scene where Ari is changing her clothes, and there's just immediately this crowd of people that are watching her — just because she's changing her stockings, just changing her shirt," Badgley adds. "I can't imagine what you'd have to do on the streets of New York or London today to have a crowd of 50 people in, like, two minutes, watching what you're doing. To me, when I saw that piece of footage, I was like this is really incredible that this is such a big deal. Somebody being that free with their being, and everybody just thinks it's completely bizarre."

The shock of it all — of women simply being themselves and doing what they wanted, because that's ultimately all The Slits wanted — eclipsed the importance of the dynamic, original music they were releasing to the point that they were accused, basically, of falsifying their debut LP. Signing with Island Records, joining a roster that included Bob Marley, Grace Jones, Roxy Music and countless other famous names, they released Cut in 1979 with renowned producer Dennis Bovell. And some press questioned whether or not it was The Slits themselves playing the music, that it "must have been Dennis," Pollitt recalls.

The impetus for making the film, Badgley says, came by way of Jennifer Shagawat, a Slits tour manager and friend who Ari Up had enlisted to help make a film about the band.


When Ari Up passed in 2010 from cancer, it was a sudden shock for fans, many of them new followers rounded up by a 2005 reformation, 25 years after dismantling, that included a U.S. tour and two releases. But Ari Up hadn't disclosed her illness to Shagawat or bandmates, either.

"So Jennifer's left with this really terrible situation where she's mourning the loss of a friend, someone she looked up to, someone she idolized in a lot of ways, but at the same time, she's sitting on a mountain of work," Badgley says, adding that both Shagawat and Pollitt felt a "real dedication" and responsibility to Ari Up to make use of all her documentation.


Shagawat stayed on as producer, but contacted Badgley to direct; both musicians, they'd played shows together years before, and Badgley had just wrapped up screening his first music film. At first, he declined, concerned about major label red tape and a lack of financing to break through it.

"Then two weeks later, I woke up with that kind of realization of like, are you completely insane?" he says. "It's just too incredible an opportunity for too important of a band — you just have to grow up and do it, so that's what I did. And it was every bit as tough as I had feared."

Finishing up the rough cut in friends' living rooms after losing his house, Badgley lost financing too — right as payment for footage and music was the necessary next step. Despite widespread press in major outlets, crowdfunding efforts didn't make ends meet. Eventually, after dozens of unsuccessful L.A. meetings, he was finally connected to a sales agent through a fellow filmmaker who'd seen his first movie.

Thankfully, the film is here — it's screening in Brooklyn tonight, featuring a Q&A with Badgley and Shagawat moderated by Jenn Pelly of Pitchfork. Hear to be Heard: The Story of The Slits will also be shown in a slew of other cities across the U.S. through June.


For Badgley, there's no better way to describe the film than how his mother, who he describes as a hardline opposite of its demographic, responded after watching: "It's a movie about freedom."

He says, "I think that you need a word that big to describe a band that did that many different types of important things. I think that if you have a word that's too small, it becomes another box, which they definitely hate. [They talked a lot about] how much they hate all sorts of different words that are going to box them in, because they don't want to be boxed in. That's the entire point."

The full schedule of screenings is available here. For additional reading, see Zoë Howe's 2009 book, Typical Girls? The Story of the Slits.

Photos Courtesy of Here to Be Heard: The Story of the Slits