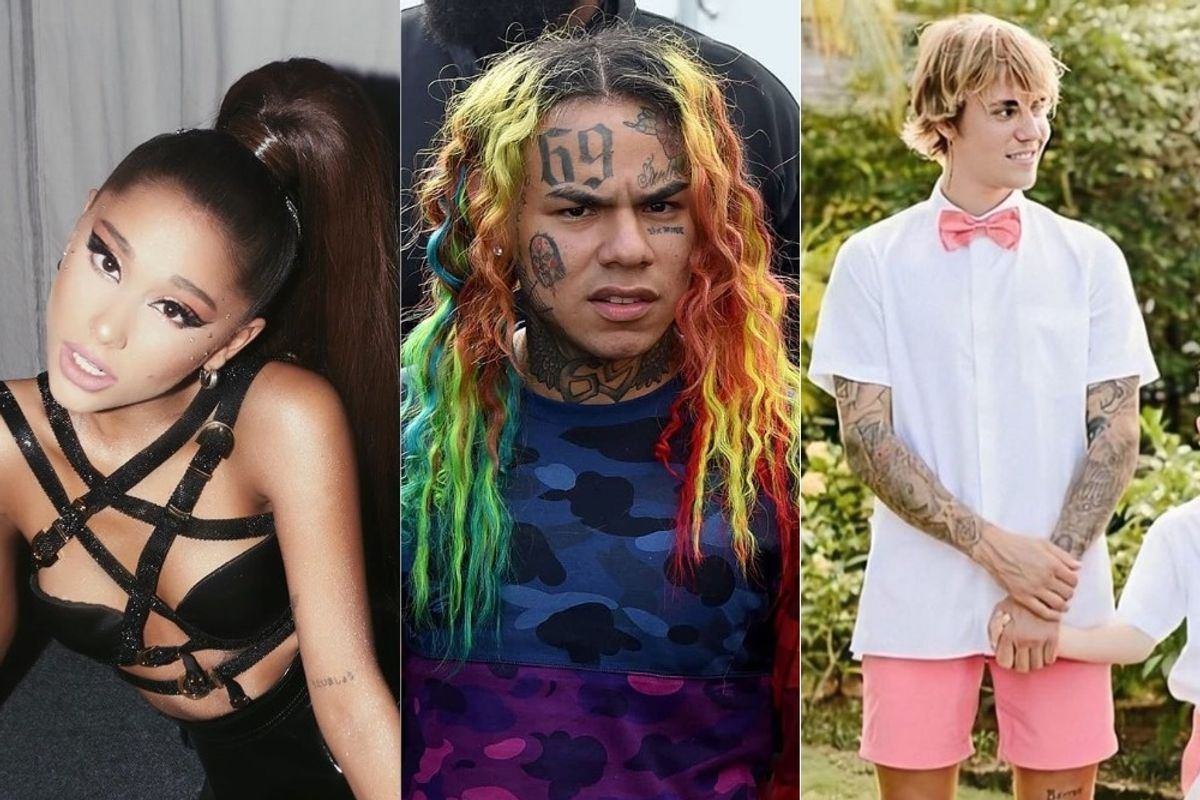 A fun morning beef, if you need a snack: Ariana Grande and Justin Bieber's quarantine charity single "Stuck With U" is currently perched atop the Billboard Hot 100 (knocking Doja Cat and Nicki Minaj's "Say So" remix down to No. 2 and Beyoncé's rework of Megan Thee Stallion's "Savage" to No. 5… make it make sense). Alleged sexual predator 6ix9ine was recently released from his racketeering sentence as a result of coronavirus, was bummed that his post-prison single "GOOBA" only made No. 3. Now, he's accusing Ari and Biebs of buying their chart spot.

"I want the world to know: Billboard is a lie. You can buy No. 1s on Billboard," the rapper contended in a very passionate Insta video, fitted up in an excellent all-white and pink look. He references an "ongoing investigation," while holding up some screenshots of charts on his phone: "Last Thursday, Ariana's 'Stuck With U' got 60,000 units last second… With the investigation we found this: they purchased half of those with six credits cards." He says Billboard illegally disqualified 20 million streams from his own song. "YOU GOT CAUGHT CHEATING AND THE WORLD WILL KNOW," he captioned the post.

IM BACK AND THEY MAD on Instagram: “@billboard YOU’RE A LIE AND CORRUPT. YOU GOT CAUGHT CHEATING AND THE WORLD WILL KNOW.”

What are Ari and Biebs saying?

Grande fired back in a lengthy, indignant Insta post celebrating their victory and suggesting Tekashi go get his own ride-or-dies. "To anybody that is displeased with their placement on the chart this week or who is spending their time racking their brain thinking of as many ways as they can to discredit hardworking women (and only the women for some reason… ), i ask u to take a moment to humble yourself," she wrote, also offering this advice: "Be grateful you're even here. that people want to listen to u at all. it's a blessed position to be in. i've had a lot of "almost number ones" in my career and i never said a goddamn thing because I FEEL GRATEFUL TO EVEN BE HERE."

Biebs also came to her defense: "This is my song with Ariana Grande and I'm honored to work with her to help raise money for a great cause. If you gonna say her name make sure you say mine because it's our song."

Ariana Grande on Instagram: “thank u to everybody who supported this song, this cause and made this happen. we love uuuuu so much. 🤍 there’s so much to celebrate today.…”

Their shared manager Scooter Braun also hopped in the ring, reiterating the Billboard chart rules. He says while there was a video with an unusual number of bot streams, he claims "it wasn't ours."

Is Tekashi backing down?

Hell no. He doubled down in a dispatch to Ariana posted later yesterday, saying she doesn't understand what losing out on the No. 1 means to him. "I don't want you to think that I am coming at you. Not saying that you're not talented," he says in a video, contrasting documentary footage of his family's apartment Brooklyn with a Disney clip of Ariana. "I worked super hard to make it out of Brooklyn NY. I speak for the millions of kids who aren't as fortunate as you," he captioned the post. "The millions who weren't fortunate to be on T.V.. LIFE is REAL when you're on welfare LIFE is REAL when you grow up with out a father. You don't know what that is like. You say for me to be humble .... I don't think you know what humble is.......... YOU ARE VERY TALENTED AND BEAUTIFUL GOD BLESS YOU. But you will NEVER UNDERSTAND MY PAIN."

IM BACK AND THEY MAD on Instagram: “@arianagrande All I’m saying is I worked super hard to make it out of Brooklyn NY. I speak for the millions of kids who aren’t as fortunate…”

What does Billboard have to say for themselves?

The magazine published a "Chart Beat" post explaining "How Billboard Came to Its Calculations in This Week's Race For the Hot 100 No. 1," saying it was all fair and square. The out that any streaming numbers Tekashi had access to will naturally be different than the "post-audit number" provided to Billboard and Nielsen Music/MRC Data that excludes "streams that do not meet long-standing charting parameters, such as U.S.-based-only plays, minimum play length, excessive plays and lack of user verification."

As far as the notorious six credit cards, Billboard claims they audit all "excessive bulk purchases" and remove those units. They chalk "Stuck With U"s late sales spike up to the fact that signed copies of the single went up for sale on Grande and Biebers' websites in the final day of the chart period.

They also refused Tekashi's claims that Billboard said they "couldn't disclose" information about the chart calculation when asked: "Billboard and Nielsen Music/MRC Data were open and forthright with all information pertaining to "Gooba" with 6ix9ine's team."

So... is Tekashi backing down?

Of course not. "Don't worry we going #1 next time," the rapper wrote on Insta, captioning a photo of himself holding six credit cards.

IM BACK AND THEY MAD on Instagram: “Don’t worry we going #1 next time 💳 @billboard”

Chart disputes have commonplace in the last few years. In his initial post, Tekashi even referenced Nicki Minaj and Jay-Z's respective Billboard beefs. Nicki said the charts were rigged against her when Travis Scott's ASTROWORLD beat out Queen for No. 1 the week of its release. Jay-Z alludes to "inflating numbers" on the Billboard Hot 100 during his verse on Meek Mill's "What's Free."

"Now I understand why Jay-Z and Nicki Minaj says 'Billboard like, we use to look up to them,'" Tekashi said in his first video. "But now we know it's all manipulated, it's all fabricated."