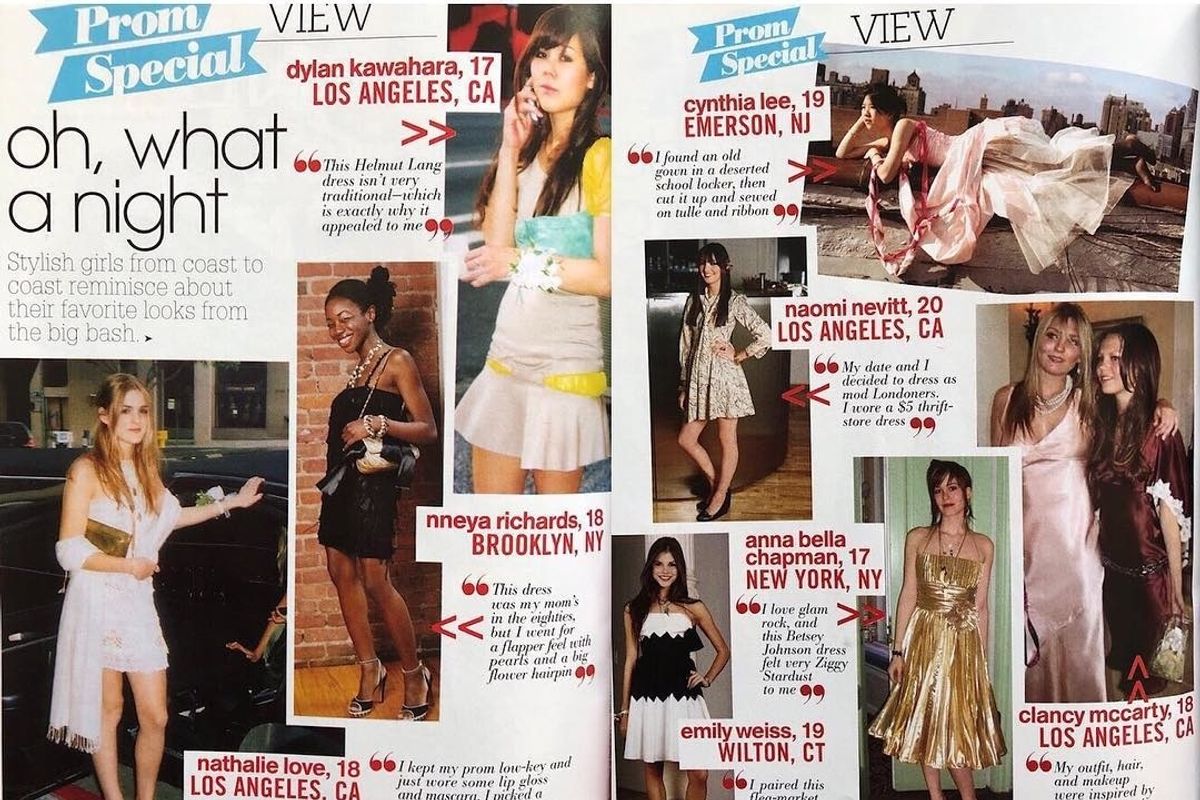 Should We Mourn the Death of Teen Magazines?

There's nothing better than a soothing scroll back in time, and social media makes it so damn easy to get nostalgic. Boomers and Xers mourn their good ol' days on Facebook; for Gen Y and Z, reminiscing takes place on the grid. Instagram is a k-hole of digitized 1990s and 2000s memorabilia down which we re-live TV shows, Versace dresses, pop stars, and early internet meme culture. These throwbacks are usually tinged with sadness — life was so much better back in the relatively recent past, right?

It's unusual for nostalgia accounts to get critical rather than misty-eyed about their own content, which is why I hit follow on @thankyouatoosa. Run by journalist and one time Teen Vogue intern Casey Lewis, and named for former young gun CosmoGIRL! and Seventeen editor-in-chief Atoosa Rubenstein, it spotlights the early millennium heyday of those three magazines, adding bemused captions. More often than not the content is jarring in its lack of wokeness, as Lewis is aware.

"A lot of it is just crazy to think back on," she says. "Especially stuff around gender issues." The quintessential teen magazine subscriber, Lewis grew up in a tiny midwestern town, pre-social media. These publications were her lifeline, and literally inspired her to move to New York City and pursue a glossy career, 13 Going on 30 style. While visiting her family for the winter holidays last year, she returned to her childhood bedroom and started re-reading. The mix of mirth and horror inspired her to bring a bunch of back issues home to New York and start scanning. "Some of the things I was seeing were just so absurd," she says. "The first thing where I was like, 'How does this exist?' was all the boy crazy quizzes. Because that would never happen now. And the diet stuff? For teenagers?"

Related | Jennifer Lopez Looks, From the '90s to Now

There is a lot to genuinely enjoy about an old school teen magazine spread. The levels of access and influence that print publications had even ten years ago is unheard of now — one of the most surprising I-totally-forgot-about-that aspects is just how jam-packed their pages are with celebrity Q&As, big and small. You also realize just how long some big names have been dominating headlines: figures like Beyoncé, Jennifer Lopez, Britney Spears, Gwyneth Paltrow, and Natalie Portman have maintained A-list status for decades, although they definitely used to give more interviews. Access aside, pages are constructed with an unrushed sense of perfectionism. They're heavily detailed and lovingly curated. The copy is fresh. The DIY tutorials are cute, as are the Juicy tracksuits. Writers make some surprisingly smart cultural predictions.

Then there's everything else. Lewis points out a Seventeen scan that describes, in detail, something called "the low-rider workout." Dating back to 2002, it's a gym routine for young women who want to "bring their belly button out of hiding." An insect-thin model smiles knowingly at the camera, her jeans slinging so far below the belt that you wonder how her underwear isn't visible. "When you're a 15-year-old or 14-year-old reading that, while your body is growing and changing and you're going through puberty?" Lewis asks. Pre-body positivity movement content aside, it's the abject focus on dating and boys that gets to her the most: "Literally how to be a cool girlfriend guides, I've seen. Another thing is how to wear your makeup for guys, how guys want you to wear makeup, how guys want you to dress."

Related | There's a Hole Reunion on the Horizon

I feel a warm and fuzzy connection with the magazines reminisced about on @thankyouatoosa, while at the same time acknowledging that they partly destroyed my brain. I'm still in recovery from mainstream 2000s teen culture, where concerningly skinny straight white girls holding Starbucks cups in paparazzi shots were considered the only beauty standard worth aspiring to. Even the unfamous subjects of 2000s teen magazine interviews tended to be dubious role models. "It's interesting with Teen Vogue in particular that so many of these teenagers they featured in street style interviews or whatever, who to me it seemed like they were randomly cast, now are famous," Lewis points out. "It's so weird how many of them work in fashion now," Lewis says. "I would never have googled them back then, it wasn't a thing, but now it's like, 'Oh, your dad is this person, that's how you got in there.' When you're reading a magazine you think that maybe you could be the next Lauren Conrad. But actually Lauren Conrad is from a very wealthy family, and she's connected."

An easy take away from @thankyouatoosa is that today's teens are better off, but that thesis would be more solid if they had anything more edifying to read. With ElleGirl and CosmoGIRL! all long since folded, and Teen Vogue and Seventeen going digital only, 2019's high school students are consuming entirely new forms of content, most of it created by their peers rather than editorial teams. Teen Vogue has in recent years pivoted away from fashion and into activism with some success, but the publication is hardly the locker room titan it once was. Not even Tavi Gevinson's feminist-focused online-only publication Rookie was able to maintain an audience, despite the fact today's teen readers are arguably far more engaged with gender issues than any other generation before them.

Thank You Atoosa on Instagram: ““Looks like this heiress apparent is on her way to becoming an actual apprentice.” 🙃 Teen Vogue, 2004. (Also it’s probably for the best she…”

Is a KarJenner selling skinny tea worse than a fact-checked, copy edited diet guide produced by a group of educated and experienced Condé Nast writers? Well, yeah. And that's an issue. "When I think about teen magazines the number one thing I feel nostalgic for is media in general," Lewis says. "How do you reach teens if they're not reading a print magazine or even a website? How are they getting actual information?"