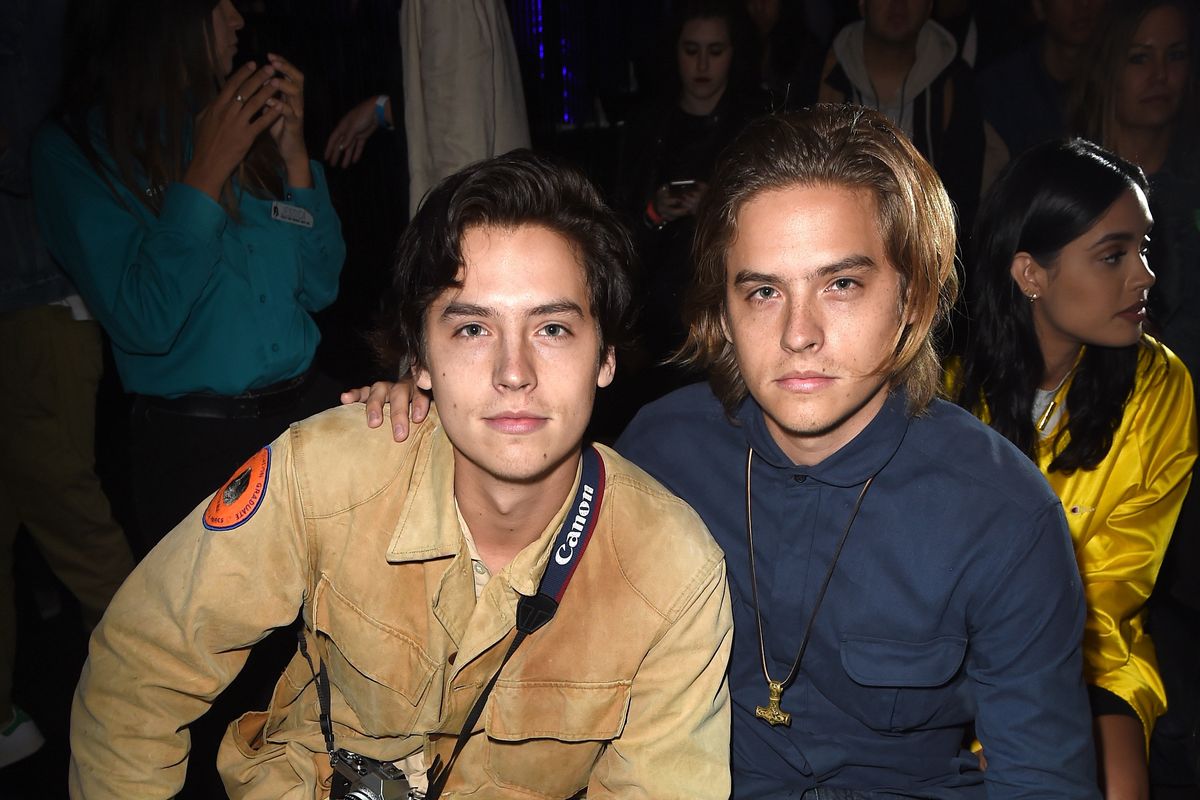 How to Tell the Sprouse Twins Apart

Are you discovering the Sprouse twins late in life? It's okay to admit. Most likely you were at least vaguely familiar with Dylan and Cole during their Disney Channel tween idol days, when they had blonde highlights and played titular characters on The Suite Life of Zach and Cody and its spinoff The Suite Life On Deck, and are now a little confused. Both brothers went on acting hiatus when Suite Life wrapped in 2011, but over the past couple of years they've returned to screens and gossip columns with a vengeance, forging two completely new identities. The Sprouses have attained that hard-to-grasp Instagram-level fame where people over the age of 30 have no idea who they are, but little sisters around the country are obsessed. They are suddenly, and despite a long history of bad hair choices, cool.

But which one is which? One owns a meadery, one acts on Netflix, but due to being identical twins, Dylan and Cole look exactly the same. Which makes pinning down their respective personalities and acting credits a little tricky. Never fear! Below, a definitive guide to telling America's most influential twin twenty-somethings apart — their out-of-print biography unfortunately costs $176.98 on Amazon, so this article is the next best thing.

The Sprouse twins are 26 years old, both born in Italy on August 4, 1992. Their parents were apparently English tutors in Tuscany at the time, which sounds idyllic. They named their sons after Nat King Cole and Dylan Thomas, which is incredible — I would absolutely love to meet these people. Dylan is older by 15 minutes. The family moved back to Southern California four months after the twins were born.

As Mary Kate and Ashley can testify, cute young identical twins are an asset in Hollywood, where child labor laws prevent any one kid from filming for more than three hours per day. Cole and Dylan — or their poetry-loving parents, I guess — were soon taking advantage of the twin loophole. They scored a joint role playing Patrick Kelly on the ABC series Grace Under Fire, and in 1999 they made their feature debuts playing the son of Adam Sandler's character in Big Daddy — Cole was in one less scene than Dylan. But then Cole (not Dylan) starred as Ross's son Ben on Friends. He had a crush on Jennifer Aniston!

Dylan and Cole were cast in The Suite Life of Zach and Cody in 2005. Dylan was Zack, Cole was Cody. During their Disney Channel tenure they were earning a reported $40,000 per episode, plus profiting off clothing lines and merchandise. They were, at one point, estimated to be the world's wealthiest twins. Perhaps seeking more normal lives, in 2011 both brothers enrolled at NYU's Gallatin School, where Cole studied archaeology and Dylan studied game design. As a student, Dylan briefly worked as a restaurant host, "as a way to try a new experience, working somewhat below the means I'm used to, as well as a way to socialize and get out of the house." He also commentated several Super Smash Bros tournaments. Cole and Dylan both graduated in 2015.

This is where their paths diverge. Both brothers faded almost totally from the public eye until Cole emerged from relative onscurity to play Riverdale's Jughead Jones in 2017. With the exception of Cole's brief role on Friends, this was the first time the brothers hadn't shared a role. But Dylan seems fine about it! He maintains an enigmatic social media presence, owns a meadery in Williamsburg, and starred in a Camila Cabello music video.

Okay! This is the important bit. I've determined that there are three easy-ish ways to physically tell the Sprouse twins apart — the shapes of their faces (Dylan's is slightly rounder), heights (Cole is slightly taller), and hair colors. In the past, they've both rocked truly heinous blond ponytails, but right now Cole has dark brown emo hair (because the character he plays is a weirdo, if you haven't noticed) while Dylan has what's presumably his natural shade of light brown. Behold their most recent public appearance together:

It's trickier when you're not looking at a side-by-side comparison, though. For solo images, there are a couple of tricks to remember. Dylan has two freckles on the left side of his neck, whereas Cole has two on the right — thank you to this fan-made montage video, set to a Michael Buble song, for helping me figure that out. They also have different beauty marks: Dylan has a mole above his lip, Cole has one on his chin.

Probably the number one thing to know about Cole Sprouse is that he is dating his onscreen love interest Lili Reinhart — the Betty to his Jughead. They're happy together, it seems like! Lili has publicly confirmed that she enjoys having sex with Cole, and they enjoy posting cute photos of one another on their Instagram grids.

Dylan, too, is engaged in a high profile romance — with model Barbara Palvin. They've posed for a Valentine's Day W cover and everything.

Also, at age 11, Dylan once dated fellow tween star Miley Cyrus for 24 hours. "We met on her set, I believe, and we dated, and then Nick Jonas walked by and it was over," he explained during a Jimmy Kimmel appearance. What could have been.

As their Tuscan origins would suggest, both Sprouse twins are cultured in their interests. Cole is an accomplished photographer, and has participated in several archaeological digs. He once unearthed a Dionysian mask in Bulgaria? Cole also has a flair for poetry — he once wrote this ode to his mom: "I love you mom, you are the best/You're better than all the rest/And if anyone ever takes us apart/I'd repeatedly stab them in the heart."

Meanwhile Dylan, who calls himself "the human version of the stussy S" in his Instagram bio, is a video game obsessive and master brewer at his own hipster meadery. He told PAPER last year that he enjoys "being hands-on with the process, making a mixture, using the paddle — that stuff might seem unglamorous to other people, but I've come to love it." He prefers to act in film roles over TV, and has only seen one episode of Riverdale.

To truly understand the crucial personality differences between Dylan and Cole, look no further than the autobiographical statements published on the twins' now-defunct official website in 2008. Here's Dylan:

"I was born 15 minutes before Cole, and I still use it to my advantage — hahaha. I love surfing, snowboarding, playing video games, walking my dog, Bubba, acting and pretty much anything that is fun to do. I'm not sure if you want to hear a funny story about Cole and me, but here's one anyway. One morning, our school was planting new trees. I was playing on them when our principal told everyone in our school not to. I broke a limb off a tree and I said that Cole did it. The next morning at assembly when all the kids were sitting down, they announced his name and he got into really big trouble. I let him take the blame for a while, but then I told the principal it was really me. So, I was beaten with a stick. Just kidding!!!"

"I was born in Arezzo, Italy — 15 minutes after Dylan — in a small hospital called Clinica Tanganeli. We were delivered by Senora Maggie, a midwife who had hand-delivered at least half the town since World War II. I love animals. I'm really into superheroes. I love snowboarding. I'm very outgoing. I'm usually the hit of the parties. I like rock music. What I like in girls is a funny personality, not a crazy fan. I like a girl who is down-to-earth and doesn't get worked up over anything — not the kind of girl who is so worried about how she looks that she has to put on pounds of makeup!"