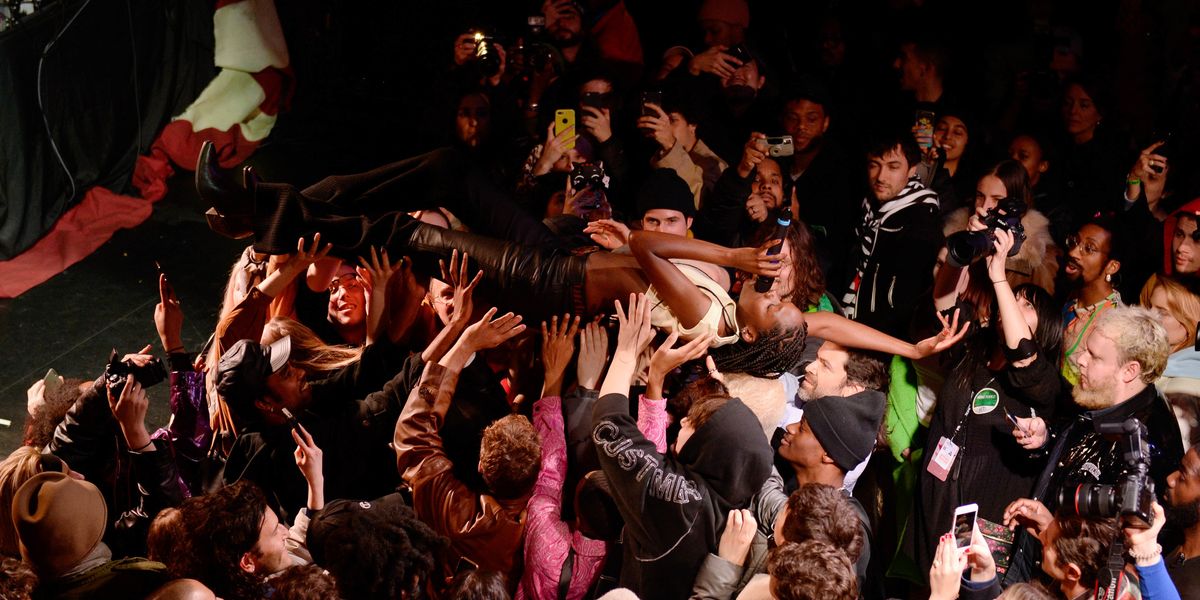 Here is a phrase I did not think I'd ever type: last night, I moshed at a fashion show. Hardcore industrial band Ho99o9 (Horror) closed out Telfar Clemens' fall 2019 show at Irving Plaza with a sweaty, life-affirming set. I was lead into the pit by a friend, an editor at Condé Nast–a moshing fashion editor. Whither Cat Marnell?

The moshing was a highlight — Ho99o9 rules, and also all of the band members are extremely hot, which is fun — but it was just the tip of the iceberg of Clemens' brilliant presentation. The show, called "Country" (emphasis on the "cunt") toyed with yee-haw aesthetics, questioning what it means to be a citizen in a place that doesn't seem to want you. "For those who land-ed here as objects, treated as a part of nature, we are all a little bit Country," read the show notes. "The sound we make is Country Music." The clothing consisted primarily of Telfar standards — asymmetrical tank tops and thermals – mixed with western accents, cowboy graphics and chaps.

But the clothing, last night at least, came second to the showmanship. Dazzling Black cowboys were bathed in red and white light, with an unearthly live soundtrack from DJ Total Freedom and blues musician Robert Randolph that dared you to worship the models. And worshipped they were. The stage at Irving Plaza is too short for a traditional catwalk, and so the models (or "countrymxn" in Telfar-speak) just fell right off, stage diving into a crowd that held them up for all to see. They jumped with arms outstretched, knees bent at the right angle to be carried. Accompanied by a monologue by lauded Slave Play writer Jeremy O. Harris, the models floated through a crowd that parted like the Red Sea. A baptism by fire.

Telfar has always been part of the art world (collaborators include the likes of Babak Radboy and DIS Magazine) and he has worked with musicians (like Oyinda, who has performed at his last three shows) for many seasons now. His work tells stories about America in a way that begs for someone to write a master's thesis. Last night he recognized Black Americans' contributions in two areas where essential creators are often ignored by the white establishment: the creation of the West, and punk and rock n' roll, paying tribute to the likes of Sister Rosetta Tharpe and Bad Brains.

But last night, Telfar also just made everybody feel alive. The first time I ever saw one of his shows, the models carried the designer backstage, tossing him around to cries of "Telfar, Telfar!" Last night he did it publicly, crowdsurfing atop his many acolytes. They shouted their adoration. My eyes ran, my nose crinkled. One garment had tzittzit fringe. L'chaim.