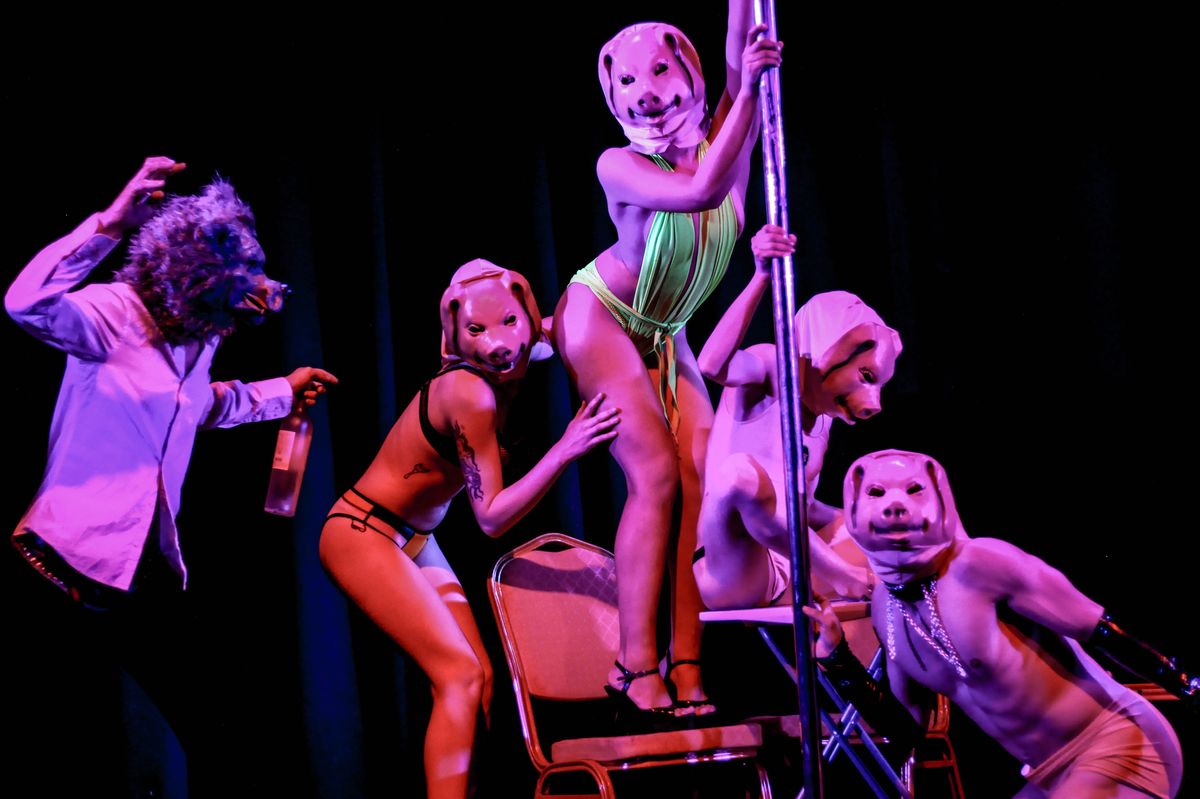 Talking Sex Work, Making the Political Avant Garde, and Psychedelic Memories with the Creator of "Dirty Panties: The Musical"

From the creators of Ketamine: The Musical

Imagine a psychedelic trance, but a hundred times more sexy, surreal and terrifying, and you'll have Dirty Panties: The Musical, the latest production from the multi-hyphenate world of Bushwick's House of Yes. All cartoon violence with a burlesque twist, Dirty Panties: The Musical, as its description states, "fucks with politics and flirts with art." Really. Voiceovers by three-year-olds, tied up aerial dancers, pizza, near-death experiences, and – of course – dirty panties decorate the program.

Done in the style of director Anya Sapozhnikova's seminal work, Ketamine: The Musical, the production also includes a healthy dose of political activism. It was made in collaboration with the Sex Workers Outreach Project (SWOP), a human rights organization working towards destigmatizing and legalizing sex work. The show is a series of loosely connected vignettes written by those who are or have been in the sex work industry, relating their emotional and political struggles.

We talked to the show's creative head and co-director at the House of Yes, Anya Sapozhnikova about turning sex workers' stories and experiences into psychedelic theater and making everyone feel welcome and seen.

What inspired you to make the piece about the lives and stories of sex workers?

I've been thinking about it for a long time. It's obviously a really fascinating experience that I got to have. Mostly positive experience – but just weird, and… fascinating. The stories that came out are just really great stories. And as my performance art career and directorial career has been developing, it has always been in the back of my mind that I'm going to do a show about this. And then when Trump got elected, and all these human rights issues came to the forefront of our consciousness, it just felt like the right time to do a show like this.

Of course! Do tell me about the political aspects of the show.

The political part of it is that in one of the acts we explicitly talk about a political issue, for example. it's a cabaret/burlesque-ish dance number about the three little pigs and the big bad wolf. The big bad wolf comes and huffs and puffs and blows the house down – when the house falls apart there's the little pigs inside, but it's actually a strip club. Eventually the little pigs eat the big bad wolf – and there's a lot of sexy, acrobatic pole stuff in there, and silly stuff in there. The pigs often hold hands, and that represents the camaraderie of the workers, and how we've all just been each other's support system – either through friendships or organizations like SWOP (Sex Workers Outreach Project).

After the wolf is murdered and eaten, the three little pigs step forward, and the scene changes to them talking explicitly about the challenges that sex workers have with housing. We had a friend's daughter, three-and-a-half-year-old, record a voice-over that the pigs will then talk in. So we go from cartoon logic straight into "It's hard to be a little pig sometimes – the big bad wolf comes and just does whatever he wants, and we have to deal with it – and for us, it's extra hard." You see, all the work we do is for cash, and as a result we lack proper paperwork, we lack credit history, and moving – at times – can be really hard. Landlords don't like us working from home, but sometimes we have to. We're always at risk; we have no privacy to advertise the work we do, and we're vulnerable to random acts of violence from the police, from our neighbors, and from our clients. Obviously – the word sex is not used in the voiceover because we have a three-and-a-half-year-old doing it.


What was the influence of Ketamine: The Musical on this piece?

I think with Ketamine: The Musical I really found my voice as a director and producer. I've been doing this stuff for ten years, and I've created across all genres when building these acts. With Ketamine: The Musical all the elements came together. Now having found that voice, it's a lot easier to create, because I know what my art looks like. [Dirty Panties] is a combination of beautiful powerful female sexual imagery, a lot of cartoon logic and puppet-show type stuff, and then dark WTF acts. The work is made for short attention spans. It's almost a variety show format that I then linked together with transitions, and then it's very multi-genre. Now we're talking about political imagery but in children's voices, and now there's this insane acrobatic pole act, and now there's this insane psychedelic scene about two women having sex. It jumps around.

Just about everything that you'll see is not a linear experience. It's not like, "Here was this client, and he did this thing" -- it's more about the emotional story arc that the various protagonists experienced. So, like Ketamine, it's very stream of consciousness and psychedelic. It is a linear emotional story, but not a linear narrative.


How are you balancing the politics and the truth of these experiences with the art?

There's a lot of different statements that are being made, depending on who you ask from the cast, because everything in the show is true. That is what is underlying. The emotions that the piece represents are all true. The political things that we're saying are all true. The struggles we are talking about are all true.

There's a scene in the end where I'm contemplating my last minutes on Earth where I was potentially about to get murdered by somebody I was on an outcall with when I was 20 years old. He's banging on the door as I'm locked in the bathroom. The way that I chose to express that very surreal experience is through disambiguation. We have selective memories, and our memories kind of start to fantasize in a way, where we keep working it and reworking it. The act kind of takes the event, and amplifies the things that I remember most and that are important. There's a lot of things that went through my head in these very psychedelic, emotional ways, but what's underneath is that all of these experiences are true – artistically presented, but true.

Second: people in our direct community are or were a part of this industry. These are not people in hiding that you don't come across, who are all underground. This is actually a whole lot more normal then our culture allows it to be.

Third: The show is trippy and artsy. It's not an after school special, so we let the show be the creative, out-there art project that it is and the educational part is going to be all in the front room. There's going to be a table with a representative from SWOP (Sex Workers Outreach Project) in the front room. There will be a straight-up informational table. Here's what we do, here's what we're donating to, here's why sex work should be legalized. The informational aspect of our psychedelic presentation is easily accessible.

What was the collaborative aspect of the show like?

For me, I've learned a lot about what I'm trying to say and what my personal experiences meant just through workshopping the show and talking and retelling my stories to the cast and tech. It's hard to get therapy about experiences like that [of being a sex worker], and it's hard to talk to anyone about it who is not in it – it's weird. Collaborating is awesome. Nothing bad ever happens from connecting with people.

When I first started out the project, I put it out far and wide, anyone who wants to collaborate in any which way is welcome and invited. A bunch of people wrote in, and some of them were like, "I'm a sex worker and an activist about housing for sex workers, specifically." And then, somebody else wrote in and was like, "I made a series of illustrations of the sessions. In one of them, there's a girl tied up, and she's thinking about pizza." So we based an act on the illustration as if it was a storyboard.

What is the role of SWOP (Sex Workers' Outreach Project) in the show?

Aside from setting up a table in the front, we're also donating all profits from the show to them. They have been really helpful with the questions we're asking in the production. Is this wrong to say it this way? Is somebody going to get upset? How do we properly represent sex workers' rights? They've been our moral compass and our sensitivity radar.

One important thing I'd like to add, that I've realized really needs to be emphasized while working on the show, is that sex trafficking humanitarian work and sex workers' rights movements are not one and the same.

The sex trafficking line is about "saving" people – which is great, because there are a lot of people who did not choose it and need to be rescued. But the sex workers' rights movements are run by current and past sex workers; organizations like SWOP are about de-stigmatizing, protecting, making the industry safer.

'Dirty Panties: The Musical' opens this Friday at the House of Yes at 2 Wyckoff Avenue, Brooklyn. Get your tickets here!