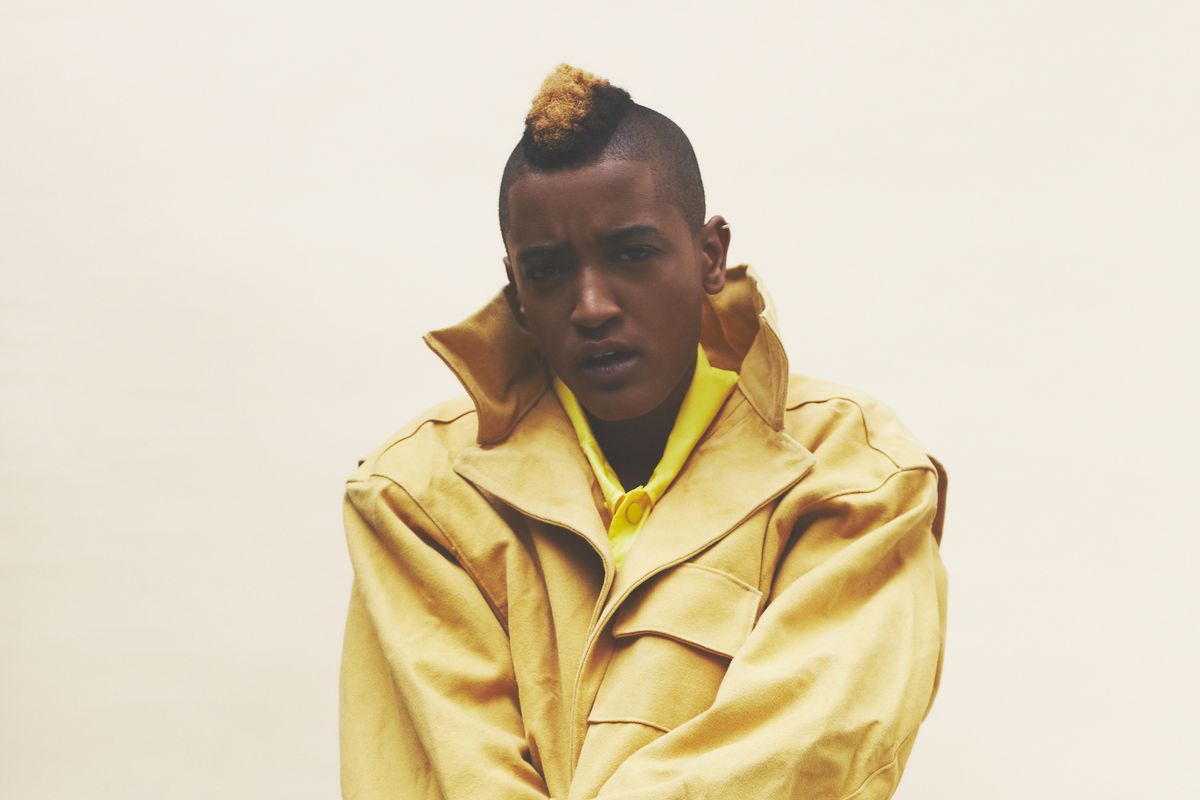 Syd Gets Out of Her Comfort Zone

After touring, Syd never really feels settled until she cleans her room: “Sweep, dust, rearrange." Her home studios get the same treatment. It's a ritual Syd (born Sydney Bennett and FKA Syd Tha Kyd) has been repeating nonstop in the almost ten years she's been in the music industry. Now 25, the vocalist, songwriter and producer made her name at 16 when she joined hip-hop collective Odd Future as a producer and DJ before co-founding and fronting the Los Angeles neo-soul group The Internet in 2011.

In February, Syd released her first solo album, Fin, a dreamy R&B record critics hope is more than a side project. Unlike Odd Future, which split up when its members went out on their own, The Internet is strengthened by its members' solo endeavors, whether it's promoting, contributing or simply giving shout-outs to each other's projects. As fellow founder Matt Martians said in a recent interview, the solo projects enhance The Internet's brand and vice versa. During its latest tour, The Internet tested out the concept with an unexpected model, integrating everyone's solo sets into the show, aptly named The Internet Presents: The Internet. “It went, honestly, better than expected for me," Syd says of the result.

Lately, Syd's been focusing on The Internet's next album, making more beats and writing more solo music. A “much more confident" songwriter and producer since Fin -- she produced a few songs on it -- Syd says that the band has gotten a lot closer since releasing their solo albums and thinks that will come through on the new record.

In many ways, Syd is getting out of her comfort zone. Before she released Fin, she made a point to play it for people -- something she's never done before. She's also made a list of artists she would like to write for, including Solange, who texted to wish her happy birthday. “I definitely responded and said, Aye, let me know when you start writing again. I'm trying to write... One day."

You've had a hell of a year so far. Fin dropped in February. The vinyl just came out. You also released songs that got cut from the album on SoundCloud. And you just finished touring with The Internet.

That's a lot. How are you feeling?

I feel good. I feel a little all over the place, but I'm in the process of organizing all my thoughts right now. I just got home. I try to do that when I get home.

Ooo -- there's a long list of people to write for I think. It all depends because a lot of the people I'm fans of are also writers. So I'm probably going to end up in a lot of co-write situations if I'm lucky too. It's a long list. [Laughs.] I don't even know where to start. I just made a list actually the other day. Like an actual list.

What kind of industry feedback have you gotten about Fin, from fellow musicians, producers, artists?

Well before I released it, I made it a point -- and I never have done this before -- I made it a point to take it and play it for a lot of people that I really admire musically or just admire their ear. The feedback was really good from everybody that I played for. And it was interesting because it was different. Everybody had slightly different feedback or different favorite songs or different parts of the album that I saw them react to more.

The Internet just finished touring. Was this the first time you tested out your model of integrating everyone's solo sets into the show?

How did that go?

We did a three-part tour. It was over a span of two, three months almost that we tested it out. And it worked really well. It went, honestly, better than expected for me. When we first started rehearsing The Internet Presents: The Internet, we had everyone's songs blended together. We were going to have everyone pop-up randomly throughout the set. But then our manager, Dave, suggested one day that we try giving everybody their own space, their own time. Honestly, at first I was like, "I don't know." And then he suggested we split everybody's set-up with Internet songs, put Internet songs in between everybody's set. And then I was like, "Okay, yeah, that might be really cool. We tried it and it worked out. It was dope. I'm happy."

Yeah. That's the model, for now. It's really dope. I like it though. I'll stick with it for a while.

You guys have such a sense of camaraderie. I was listening to The Internet Presents: The Internet podcast on Beats1, and it's all love and shoutouts from everyone to everyone. There's such an atmosphere of gratitude and collaboration.

Yeah. One thing we try to do is instill that morale, that sense of camaraderie in everything that we do whether it's waiting for someone to get out the bathroom before we walk to baggage claim at the airport or waiting for everyone to come off the plane before we keep going. Just making sure we don't leave anybody behind. Just because I feel like we've all come from situations where we may have felt left behind. And so we understand how that feels. We're all very conscious and considerate in that way. So yeah, it makes us very adamant about making sure everybody's name is included in everything we do.

What are you up to now? You said you're sort of unpacking your head.

Yeah, I spent all yesterday going over taxes. So that was productive. Now I'm sitting in my family room with my best friend, Justin, drinking some coffee. Some ice coffee. I'm going over more tax stuff. Probably gonna get ready to head to my accountant's office after this and sign some paperwork.

What do you do to settle yourself after touring or finishing projects? Do you always come home?

Well I never really feel settled until I clean my room. Sometimes it only takes like a day. Sometimes it takes a week. But I have to clean my room, like sweep, dust, rearrange. And then I usually go through my closet and I pull out everything that I'm just not feeling that day, and I donate it to charity. Then I usually clean the studios, probably rearrange the studios. In this case, I rearranged my basement studio the night before we left for Capetown. It was bittersweet because it was like, Yes, I got a new feng shui. I'm excited to go down there and work, but I can't use it for another three weeks. But I'm home so I'm trying to get back in the groove. But I've been actually hanging out in my upstairs studio more.

Are you working on any new projects? Have you started working on the next Internet album or any solo projects?

Right now, we're pretty much focused on the next Internet album. However, Chris [Smith], our drummer, he just turned an album in, so his album will be dropping really soon. But yeah, aside from promoting that, we're going to be working on the next Internet album. We worked on a little bit of it in London. We got some stuff done. We got some studio time out there. So that's cool. It's just nice to switch up the environment. And then, Matt [Martians] is flying to LA on May 1st, and we're going to get some studio time a few days in like a big room, where we can kind of like just run around and have some fun when he gets here.

So how far into the next album are you, if you're already getting studio time?

Well, no, we're not very far into it at all, actually. I think we have one song done, and like three or four instrumentals that we're in love with. But that's about it.

You talked to The Fader about how Fin was your descent into the depth that you wanted to take The Internet to. How do you think that will translate now that you're starting to work on the next Internet album?

I think I became a much more confident songwriter and writer since. I have a process now. I know when I'm fortunate and when to like take a break and when to ask for help. I kind of feel like I know my way around what I'm doing in writing now -- and even producing. Honestly, being around Steve [Lacy] has inspired me to make beats again. So that's why I ended up producing a few songs on my album. I just think it made me a better musician in general. And so, that's ultimately all I really can bring to the new album is my progression. And same with Steve. He's gotten better through making his album, and Matt got better through making his album. Same with Chris and Patrick.

Like all your separate experiences layer on top of each other.

Exactly. And we've also gotten a lot closer after releasing our solo albums. I think that will come through as well.

Any projects outside of The Internet?

No, not for me. Patrick is working on his album. It's called Letters of Irrelevance. I have a hook on there, so shout out to that. Other than that I'm chilling. I've been making more beats. Trying to get into writing to my own production because the stuff that I make on my own it has a sound that's kind of different. I'm kind of scared to play it for a lot of people, but I feel like if I write to it myself it'll make more sense. I'm trying to just take some time and do more writing to my own stuff and sit in the studio for a while.

So I'm curious, when and why did you lose “tha Kyd" from your name?

Because, honestly, everyone was spelling it a different way. I'd do one interview and they'd spell it "The Kid," and then the next interview they'd spell it "Tha Kyd." It was just kind of getting annoying. I only kept it for so long because I felt like Syd by itself was too common, but apparently it's not.