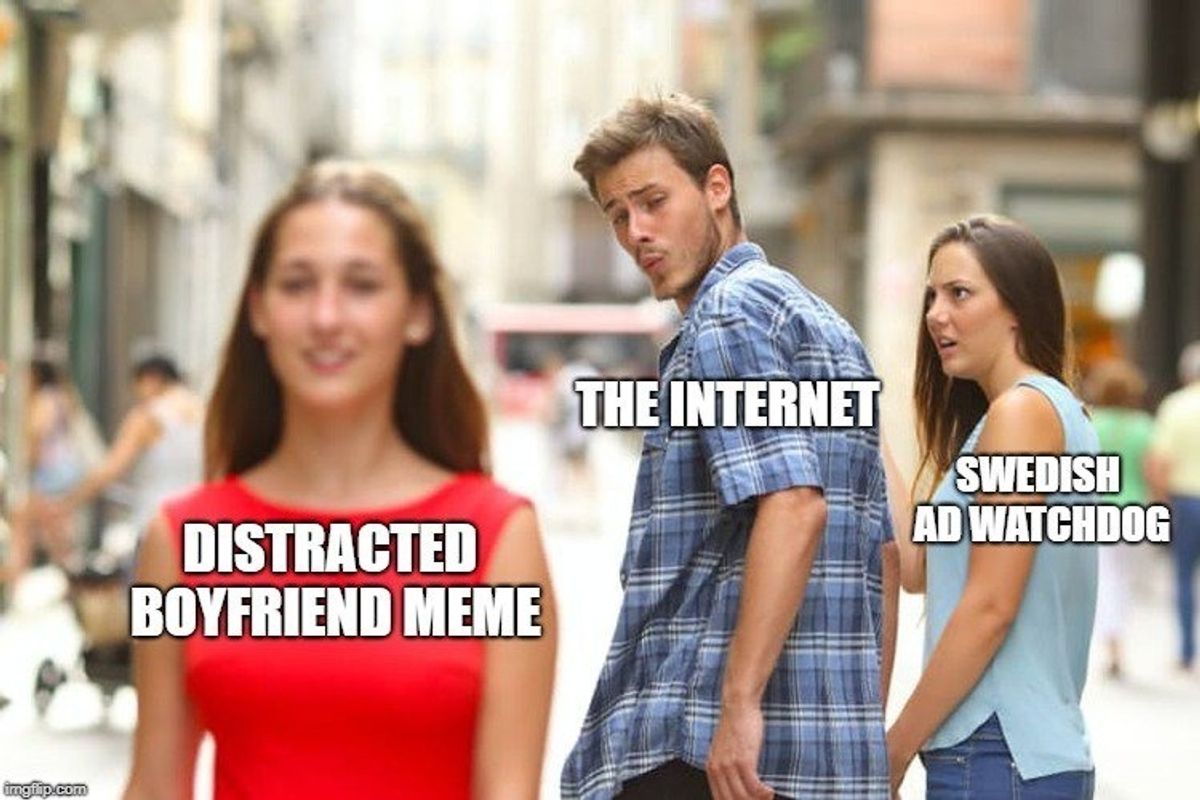 A botched use of highly fertile, although dated content the Distracted Boyfriend meme has offended the delicate sensibilities of Sweden's advertising ombudsman.

According to The Guardian, the stock image titled "Man Looking At Other Woman," which has become the universal Internet language for expressing jealousy, distraction and self-destructive decision-making was used for a hiring advertisement by Swedish Internet company Banhof. The company labelled the boyfriend as "You," the spurned girlfriend as "Your current workplace," and the seductive, passer-by as Bahnhof.

The Swedish ombudsman claimed that the advertisement was gender-discriminatory: "The advertisement objectifies women. It presents women as interchangeable items and suggests only their appearance is interesting... It also shows degrading stereotypical gender roles of both men and women and gives the impression men can change female partners as they change jobs."

They continued, claiming that "...the image objectified the two women by presenting them as workplaces, but the man as an individual, and added that the "other woman" was clearly a "sex object... unrelated to the advertisement, which is for recruiting salespeople, operating engineers and a web designer."

Since the advertisement was first shared in April, it has drawn hundreds of angry comments from customers accusing the advertisement of being sexist and objectifying, and threatening to switch to a different Internet provider.

Since Sweden's advertising industry is self-regulated, the ombudsman actually only has the power to criticize advertisements. So while they can't actually ban the use of the Distracted Boyfriend meme or punish Banhof, the ombudsman's website states that advertisers "are expected to follow the decisions."

So we hear all that, but meme inherently pokes fun at superficial bros and relies on public consensus that men are trash (as such, when we/our loved ones/celebrities/our country is being trash, we may cast them as Distracted Boyfriend). The ad is most certainly bad content (and we're never here for bad content), and we appreciate the Ombudsman's well-intentioned, Jim-like efforts to be Good Bureaucrats, but feels like we have bigger fish to fry than bad corporate memes.

Banhof quite honestly nailed it in their response, when they argued that if they're punished for anything, "...it should be for using a tired old meme."

In its honor, let's revisit some highlights from the Meme of 2017's heyday: