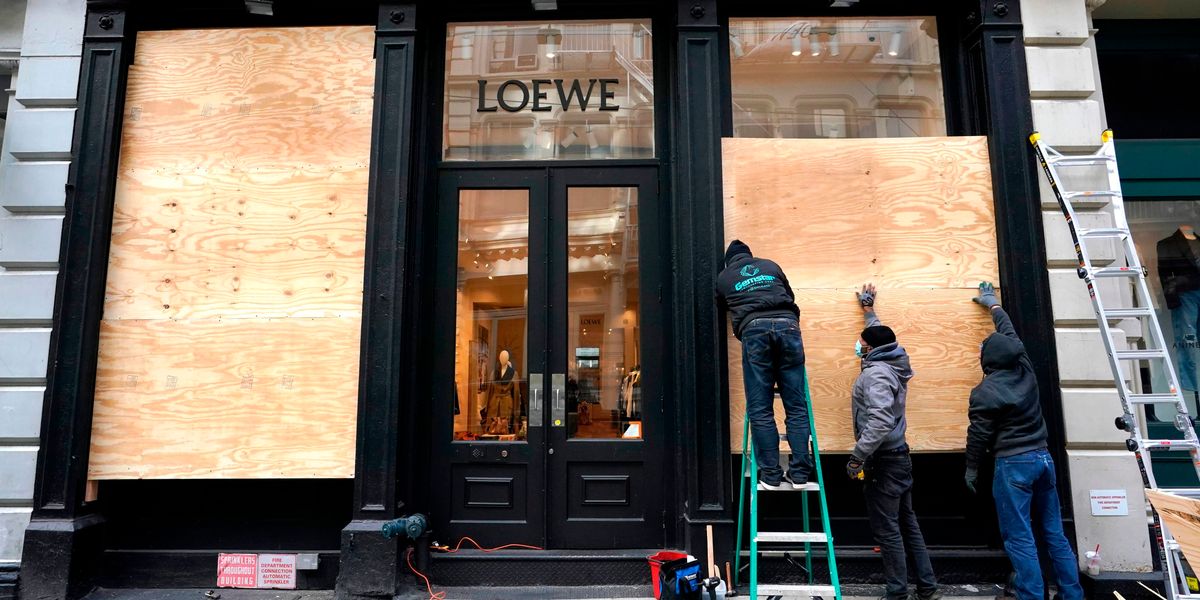 Retailers Are Bracing Their Stores for Potential Election Unrest

As America (and the entire world, really) braces itself for an election like no other, a rather unsettling reality is taking shape across the country's storefronts: retailers are barricading their shops with plywood, a precautionary measure in anticipation of potential civil unrest related to this year's voting outcome.

In New York, dozens of workers were busy boarding up windows from 5th Avenue to SoHo. Club Monaco, Macy's, American Eagle, Chanel, Fendi and Loewe were just some of the brands with crews erecting plywood over the weekend. And in Los Angeles, Vivienne Westwood, Celine and La Perla were among the many bracing themselves for possible looting. In fact, popular shopping strip Rodeo Drive will be closed Tuesday and Wednesday.

The images of boarded-up businesses are a stark and unsettling reminder of just how on edge many Americans are feeling ahead of November 3. In many locations, the boards of plywood have already been vandalized with politically-charged graffiti, and companies are attending training sessions on how to de-escalate in-store conflicts related to the election.

Earlier this summer, rioters broke into numerous luxury stores from the likes of Hermès, Marc Jacobs and Dior in places like Atlanta, Chicago, Beverly Hills and Manhattan in the wake of protests sparked by George Floyd's killing at the hands of police. As such, some retailers are spending up to $31,000 to protect their properties against potential damage.

Despite the optics of boarded-up storefronts signaling a potentially bleak forecast, the bottom line is ultimately what's at stake across the board for luxury and mass market brands alike. Given how volatile the retail climate is in the wake of bankruptcies and closures triggered by the pandemic, retailers from both ends of the pricing spectrum are not taking any chances this week.