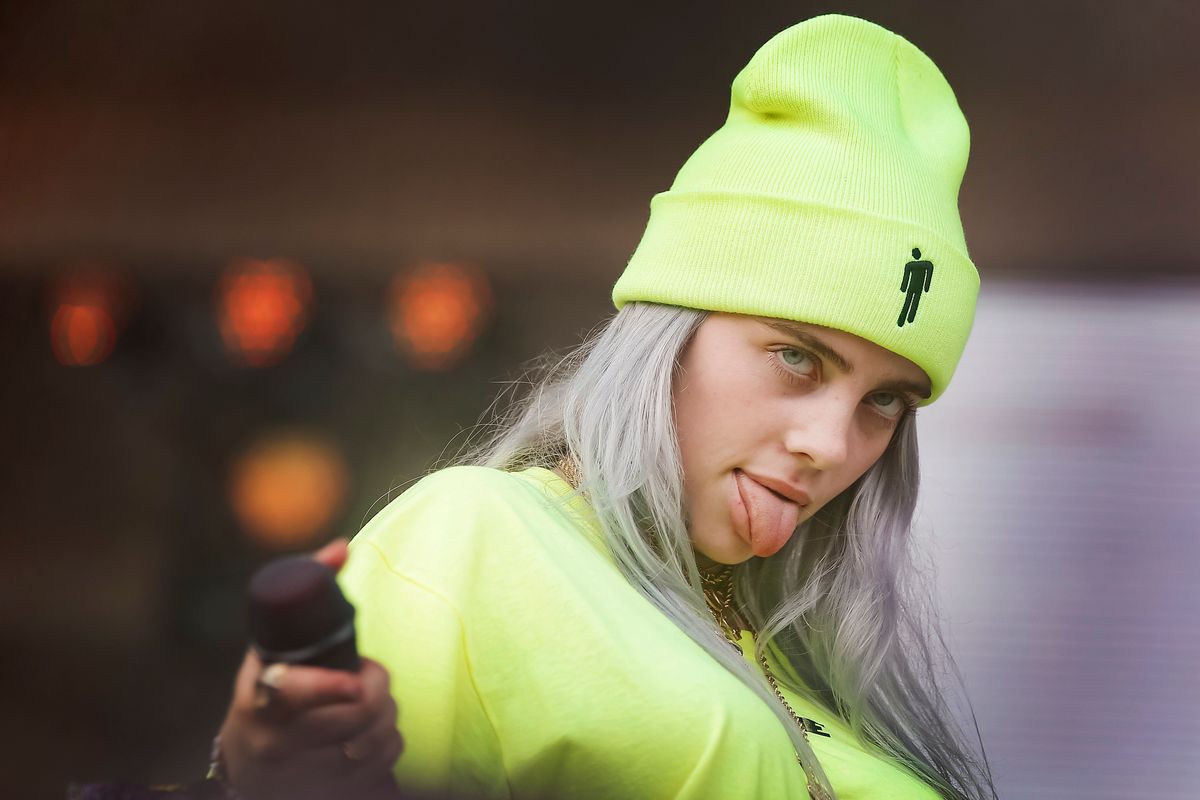 She's a bad guy, and also one of the most popular artists in the world. At just 17, Billie Eilish is already an icon, constantly pushing the boundaries of pop culture and how we think about modern celebrity.

Perhaps the most intriguing thing about Billie is the complexity behind her music and persona. Her videos juxtapose sweet wistful vocals with jarringly violent imagery, creating a refreshing combination of angst and pop which can't help but stand out in a sometimes narrow copy-and-paste industry. Instead of adhering to the normal tropes associated with teen fame and mainstream music, Billie has gained a large and intensely dedicated following thanks to her outright challenge against painfully restrictive norms. Teen pop stars look like this now, and we like it.

Eilish's stans work around the clock, and around the world, in order to support their idol. E and R, of @eilishupdates, are co-owners of one of the largest Billie Eilish stan accounts on Twitter. PAPER DM'd them to take a dive into the new and ever-growing fandom.

Do you know each other in real life? How did you guys come to run a fan account together?

E: No, we don't know each other in real life, and we probably won't because of distance. But we came together through the internet and stanning Billie. I contacted R and asked him to help me, since the account was so hectic, and that's basically where our relationship began.

So how did you come to create such a huge update account?

E: Our account was very small, and for a long time, too, since Billie — at the time we created our account — was an "underground" artist. But lately she's blown up and she's so big and with that her fanbase gets larger, and so does our account, since we frequently update.

What was it like seeing that change happen? She came out with "don't smile at me," and she seemed to be flying low on the radar for a big part of 2017. What do you think pushed her mainstream?

R: It was very weird, when I first discovered her she had a very small fanbase and almost everyone knew each other. When she released her EP you could slowly see her grow, but she was still small. Billie is unique. There really isn't anyone like her right now and I think more and more people began recognizing that, maybe when she released "lovely" with Khalid. She's got this explosive presence in the music industry that's really refreshing, and she deserves all the recognition she gets.

What is it about Billie that caught your interest?

E: She's not scared to experiment with her music, and also her relationship with her fans. She's so connected with us that it almost feels like she's talking with us face to face. She's always liking posts of fans on Instagram too.

R: When she was younger, she used to be a stan herself, so she gets what it's like to feel like the artist you love has no idea about your existence. Her age might have to do a little with it too because most of her fans are around the same age as her, which makes it easier to understand each other. But for the most part I just think it's her personality, she's very sweet and caring.

How do you think Billie's stanship of Justin Bieber and The Office affects her relationship with her own stans?

E: She was a fan of Justin at a very young age and looked up to him, so that feeling of him not knowing her means she understands what it's like to be a fan, and that's really telling when it comes to her relationship with her own fans. She wants us to feel like she isn't unreachable by interacting with us constantly. For The Office I don't really know, she's just obsessed with that show.

Being such a popular new artist, she has been doing so many things since her EP and album release. How do you keep up with her?

E: She's got so much going on it can get a little hard to keep up, and there will be things we miss, but mainly it's pretty straightforward. Our followers send some stuff in sometimes, so they help us out too.

Some people on the internet have criticized Billie for her unique style when it comes to fashion and singing. Why do you think people are so quick to judge?

E: When it comes to female artists there's always this strange need to have competition and standards enforced. Billie doesn't look like the conventional pop artist and they don't like that. They don't like change.

R: I think all celebrities have to deal with some hate, but at this point I think it's because she's a newer artist and stands out. As people warm to her music and take the time to listen, they'll hopefully understand her better.

For Vanity Fair, Billie filmed the same interview twice one year apart. In that video we got to see her react to her own changes and heightened success. As time goes on what do you think we can expect from her?

E: We don't really "expect" anything from her. Billie changes and progresses on her own and watching her grow and keep growing (fame and mentality wise), I can only hope we'll keep seeing her genuineness in her artistry.

What were your reactions after her Coachella performance? I think a lot of people were really stunned by how impressive and exciting the set was, even just through viewing the performance through social media.

R: Her set was insane! When I first started stanning her she was still doing shows in tiny venues with the capacity of a few hundred people, and suddenly she stands there at Coachella in front of what, 90,000 people? I was really blown away. The new visuals behind her and the floating bed were so impressive, and it was amazing hearing the songs from her album live for the first time.

What is it like for you as stans to see her fashion evolution?

E: Well she's not wearing IKEA bags and puffer jackets anymore, I'll say that. But over time she's also developed her own style, like you could just see an outfit and be like, "Yup, only Billie would be able to pull that off."

Can we please talk about those acrylic nails? I feel like it's such a change for her, but at the same time it perfectly aligns with her vibe!

E: Her nails look SO good, oh my god, especially with her rings. And they're so long too, like how does she even do anything on a day to day basis? I guess this is an unpopular opinion in the fandom, but yeah I personally agree they really do go with her vibe and she loves them so that's what's important. Now if only she'd get them in black or red.

Why do you say that's an unpopular opinion?

E: Some people on the TL are saying things like "maybe it's for a music video" and other stuff. It confuses me, maybe she got them because she likes them, just like anybody else in the world?

How do you think her embracing loose clothing in an effort to avoid body shaming resonates with her stans?

R: I think it's good that she set these rules for herself so early on in her career. And it makes her stand out, she doesn't conform to society's idea of what a pop star's supposed to look like. I think most stans are okay with her dressing the way she does, I just hate how some of them try to sexualize her regardless. She dressed like that to not get sexualized and then you have those people who zoom in on every part of skin that's showing in photos.

Do you think she will be able to maintain this? Can you have career longevity when you start that young?

R: I don't think her age has that much to do with her fame if I'm honest. When people call her refreshing it's not a reference to her age, but more to do with her unique and rare sound. I have no doubt in the world that she will be able to maintain it, as long as she's aware of the music environment and how it changes.

Where do you draw the line in terms of hyping up and harassment? Do you set any boundaries for yourself?

E: You have to put yourself in her shoes. If you think it could make her feel uncomfortable in the slightest, don't post it. Some just go far over this line and say things that are just too disgusting to read. Joking can be okay sometimes, but only if it doesn't hurt her. For ourselves, I think we know what we can and can't say in terms of this subject.

What's your go to Billie song?

R: "WHEN I WAS OLDER," it's so underrated. At first I didn't like it at all but it has grown on me, and from the new album "ilomilo."

E: I love "bellyache," the production on that is so good and it's a timeless bop. My favorite Billie song has to be "xanny" though, there are no words to describe that song. Just that I could listen to that song over and over without getting tired.

Will you stan Billie forever?

E: I won't stan her forever, no, because stanning means dedicating your time to supporting someone and as you grow older time does get harder to manage. But I'll always be a fan of her, even if that dwindles. I'll always respect her and remember what it was like during this period of time. It's only been good memories so far, and it'd be nice to think back on being a stan.

R: I don't see myself not stanning her, maybe in the future a bit less but I honestly don't know about that. I of course will keep loving her always. She has brought me great memories and friends which I am very grateful for.