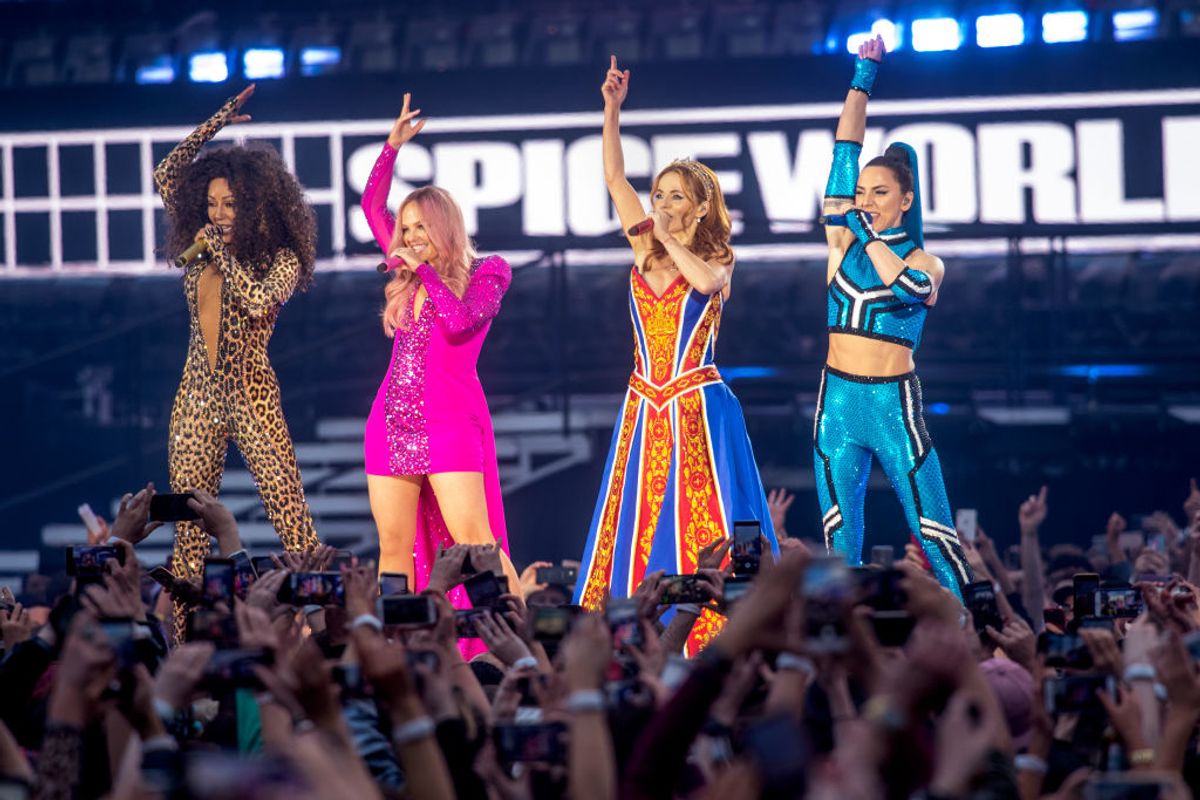 For the first time in seven years since they reunited to perform at the 2012 Olympics, the Spice Girls took the stage at Croke Park in Dublin on Friday night, kicking off their Spiceworld Reunion Tour.

Emma Bunton (Baby Spice), Geri Halliwell (Ginger Spice), Melanie Brown (Scary Spice) and Melanie Chisholm (Sporty Spice) sang and dance to their greatest hits from their debut album Spice in 1996, including "Wannabe," "2 Become 1," and "Say You'll Be There." And, of course, they also performed bops "Spice Up Your Life," "The Lady is a Vamp" and "Viva Forever" all from their 1997 follow-up album Spiceworld after which the tour is named. Victoria Beckham (Posh Spice) decided to opt out of the tour to focus on her fashion label.

Welcome to Spice World... Dublin, are you ready?! #SpiceWorld2019 pic.twitter.com/jh4iHS2Ykn

CNN reports that over 70,000 fans were in attendance at the venue. And while it was a full house, according to some tweets from concert-goers, some audience members were leaving due to the terrible sound quality when the Spice Girls came on. User @amandacrabbe said, "Sound was just awful! Couldn't hear them sing and the odd time the mic sound would spike and give feedback making it even worse! Lucky they've such iconic songs that we just got on with it!"

There’s something wrong when the crowd at @spicegirls concert are all sitting down because no one has a clue what song is on because the sound really is THAT bad. @mcd_productions @CrokePark @IrishTimes @LovinDublin #SpiceWorldTour #SpiceGirl pic.twitter.com/QkENc7BJ8Y

Too bad you can’t hear a thing. The sound is awful. Was perfect for Jess Glynn & is horrific now. Loads of people leaving.

Sound was just awful! Couldn’t hear them sing and the odd time the mic sound would spike and give feedback making it even worse! Lucky they’ve such iconic songs that we just got on with it!

At the end of the night, Mel B took to her Instagram stories to address the sound issues. "Thank you for attending our show tonight in Dublin," she said. "We will see you in Cardiff and hopefully the vocals and sound will be much, much better... Pfft."

Still, most people focused on the positive and had a great time soaking up the glory of this much-needed reunion tour. Needless to say, many happy tears were shed.

Zig-A-Zig-AMAZING! Seven years after their last performance, the @spicegirls are back on stage and exuding girl power on the first night of their huge UK tour. Welcome back Ginger, Baby, Sporty and Scary. We've missed you! ❤️ #SPICEWORLD2019 pic.twitter.com/zFo5rNnUrM

Really good despite the sound issues for the first half-ish of the show. The girls mics weren’t at the right volumes for some songs so you couldn’t hear them. They eventually resolved it and it was a banger

Sound tonight was abit shocking but I had a fab time. Dreamed of seeing Spice Girls did about 23 years. I sobbed twice. When they sang Mama and there was a little thing about feminism/girl power. I was SOBBING!

Okay. Doing my best to avoid #SpiceWorld2019 spoilers. But from what I’ve seen it looks beyond anything in my dreams. Cannot believe I’m here and I get to see the @spicegirls on Wednesday. I’m so damn excited! 😭 pic.twitter.com/vbtu7rsYOe