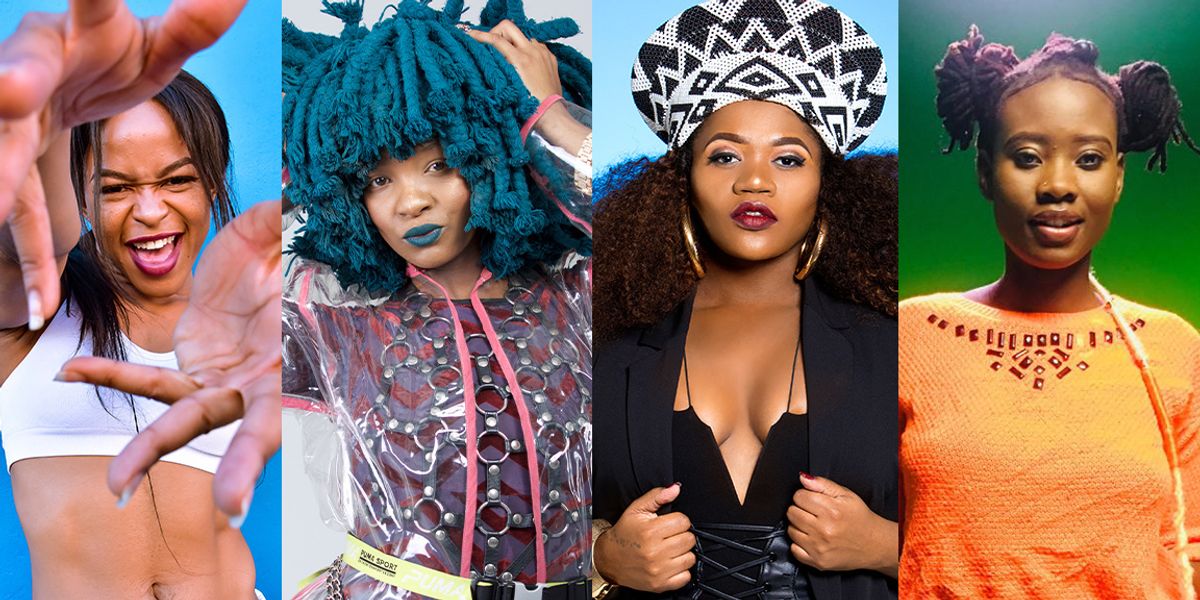 South African gqom music used to be a boy's game. The Durban-born house genre (pronounced "gome" with a click at the beginning) first emerged from townships just before 2010. The dark, underground sound, aptly named for the Zulu word for drum, is the product of a direct approach to the dance floor. Gqom is a renegade genre, not dissimilar from punk or hip-hop, which both spawned from the talents of young, self-taught creatives who otherwise felt disenfranchised from the mainstream. DIY producers, often with bootleg software, created a lo-fi, hard hitting sound with a spacious feel.

Early gqom creators took to WhatsApp and Kasimp3 (a platform where South African artists upload their music for free download) to share their music, and the low bit compression rates they used on their unmastered tracks became a staple characteristic of the genre. Its grassroots origins and close ties to club drug culture have made gqom a tough pill to swallow for more traditional listeners. The music found its fanbase and distributors in Durban's taxi drivers, who famously drive around the city blasting the local tunes from their cars. Since 2010, Gqom has steadily gained more mainstream acceptance thanks to breakout stars like Rude Boys, Distruction Boyz and DJ Lag. Despite these male roots, the people currently responsible for the genre's most considerable expansion, both nationally and internationally, are not "boyz" at all.

In recent years, a tidal wave of feminine energy has transformed gqom music and culture. Artists like Babes Wodumo (featured on the 2017 Black Panther soundtrack) and pan-african poster child Sho Madjozi have reached the top of the charts and commanded the attention of popular culture. Wodumo and Madjozi are just two pieces of a larger movement, led by female rebels and role models, who are actively shaping South African culture both on and off the dance floor. The South African queens of gqom have not only conquered the genre, but also injected it with newfound meaning. What was previously dismissed as mere party music has become a platform for promoting messages of feminism and sexual liberation. Below, meet four women shaking up the genre:

Few people better represent gqom's female forward agenda than Busiswa. The musician grew up listening to gqom in Durban, where she immersed herself in what she describes as its "rebel" subculture. In gqom clubs, Busiswa felt a sense of revelation and liberation. "Women in gqom clubs were relieved of the obligation of being a lady," she said. "It's a beautiful space where everyone could really let themselves go. You could be whoever you wanted to be for the night, the women we aren't allowed to be in everyday life."

The widely respected workhorse has a background in poetry, and her aptitude for lyricism has launched a career that pivots on messages of empowerment. It was a chance meeting with beat maker Sir Bubzin in 2011 and an ensuing feature that got her noticed and later signed to Oskido's Kalawa Jazmee Records. "The thing that happens most often with female vocalists in gqom," she said, "much like in hip-hop, is that a male producer or musician will put them on one song and then discard them. It's onto the next track, with the next 'sexy' vocalist. It's a 'come through' attitude that makes women feel disposable."

Busiswa has managed to dodge this narrative, proving herself to be a unique force to be reckoned with rather than a passing fad. By merging the inherent celebration and debauchery of party music with messages of empowerment, Busiswa aims to "inspire and to motivate," especially when it comes to other women breaking into the scene. "Women just take it to another level," she said. "They add nuance. Guys can bring fun, but they can't bring flirty, energy, rebellious energy, or sexy energy to it. We are adding in that feminine power, and calling for all of the other women to celebrate it with us."

Moonchild Sanelly, another resonate and radical female voice in gqom, also came of age in Durban's poetry and jazz scene. Her striking turquoise hair and self-designed wardrobe are matched with an equally poignant sound. Although her first album explored a more alternative vibe, something clicked for Sanelly when she finally wrote verses to a gqom beat while in the studio with DJ Maphoriosa. She's since found her stride in the dark, underground sound, letting the beats carry her messages straight to the people. "I think gqom has allowed my music to reach more people who otherwise wouldn't have been exposed to that kind of content," she said. "The alternative space is very niche, but gqom connects me to a much wider audience."

The self-described "future ghetto punk princess" has also been turning heads in South Africa and beyond, not just as a performer, but as a progressive sex symbol. Sanelly's fearlessly and frank support of female pleasure is a key pillar of her brand. "There are women in this country having children who don't even know the meaning of the word orgasm," she said. "It's easier to talk about taboo topics like female sexuality from the dance floor. South Africa is a country based on dance, so if you can translate a message through that form, you've really accomplished something. Even if people aren't consciously listening to what I'm saying, that poetry still breaks through."

Despite, or perhaps due to, her commercial success, she still receives plenty of flack for her unfiltered opinions. Men who don't simply dismiss her for her sexual agenda attempt to leverage it against her. "One of the most challenging things about being a woman in this field is learning how to say 'fuck you' to a room of men after talking business. I've been offered so many things and have had to say, 'No babe, I'm great, I'll get there on my own time," Sanelly said. She also resents that male producers and artists often pit women in the industry against one another, which inhibits their collective power. "New people on the block, particularly women, are always disrespected in the beginning. In an ideal world, the future gqom scene will be run by women who can celebrate newcomers and not hold the gate with boys, because they also had to fight hard to be in this space and understand the struggle," she said.

The women changing gqom culture aren't just spitting rhymes on a mic — they're also behind the decks. One star shining particularly bright is DJ Prie. She started DJing at the ripe age of 17, and in the five years since has proven herself one of the most innovative, adept and influential figures in the industry. Prie has toured the US, Canada and Western Europe, has shared a stage with DJ Khaled and was even the first woman to perform at the Geneva Music Festival. Today she's a beloved resident DJ on South Africa's Soweto TV and a producer in her own right.

Prie's move into the world of production feels especially inspiring, given that women are so underrepresented in producer and DJ roles. "There's no way you can hear my music and not dance," Prie said. "I'm headstrong with my mixing. I play the hardcore tracks and always deliver that energy." Her choice to focus on gqom was initially bewildering to some, considering its stigma. "Gqom is the new thing, it's influenced by young and fresh people, so naturally it's misunderstood," she explained. "Even now, many think gqom music is only for people who take drugs. It's dismissed as ratchet and I am often discredited because of my affiliation with it."

Despite her many naysayers, Prie knows that its her expertise in gqom that has enabled her career to soar, particularly overseas. "I hate to say it, but it's still such a challenge in South Africa," she said. "I have to work 10 times harder than any guy for promoters or producers to take me seriously. They dismiss me solely based on my being a girl, or otherwise, will try to sleep with me before making a hire." She added that she's had better reception and more respect in international markets. "Overseas, they appreciate my sound because its unique, and I feel they appreciate that I'm a young woman and that I'm pushing." Her sets also offer an opportunity to promote the work of other female gqom artists and give them much-needed airtime, something Prie acknowledges: "I definitely do my best to bring up the women in the scene."

Gqom music has bred a very specific style of dance that reflects its renegade spirit. Durban born choreographer and dancer Sne Mbatha has become the global ambassador of the gqom movement. "It moved me instantly as a dancer, because the sound itself speaks to your body," she said. She vividly remembers her introduction to the genre as a child through hometown taxi drivers. "The base hit so hard, you felt it all the way from your school shoes up to your head. Once you're inside a gqom taxi, you can hear that 808 vibrating the windows and nothing else. Sometimes people would get out of the car and start dancing in the street. No matter how bad your day was, a ride in a gqom taxi meant guaranteed fun."

Today, Mbatha says gqom dance styles are some of the most popular in the country. The basic move that underpins it all, called the bhenga, is what Mbatha calls "the essential style, to carry you through the mood." It became popular in nightclubs where patrons were doing their best not to break a sweat, eventually settling in as the foundation of the style. While people of all genders love to dance, Mbatha, who has toured South Africa with Kendrick Lamar and opened the likes of Jay Sean, Kanye West, Nas, Usher and Timberland, says that there are just as many hurdles to overcome for female dancers as there are for vocalists and producers. "There are so many challenges, even in being casted," she said. "As a female dancer, your sex appeal counts before your brain and your ability." That objectification results in a lower bar (and appreciation) for technical ability. "The crowd reacts so differently to how men and women perform," she said. "If a girl does a hard hitting routine, it will never receive as much applause as a feminine piece with some ass shaking."

Mbatha, though, has made a name for herself as an expert in a style that doesn't appease traditional gender stereotypes. "I've let it be known in the industry that I am Sne and this is how I dance," she said. "I've never been ashamed to dance 'like a boy' and have always told those who don't like it to buggar off." That defiant spirit has helped her make a positive impact and establish a more liberated precedent for other female dancers in the future — something that's desperately needed for girls and women looking to break into the genre.

"Gqom music is a very hard industry to tap into, it's worse than house, hip-hop or anything else," she said. "It's still male controlled, not even male dominated. It's also an up and coming genre. If you aren't doing it exactly like Babes Wodumo, they don't really accept you. So I look at every woman in this industry with major respect, because it's hard to commit your energy to something that the gatekeepers traditionally deny."